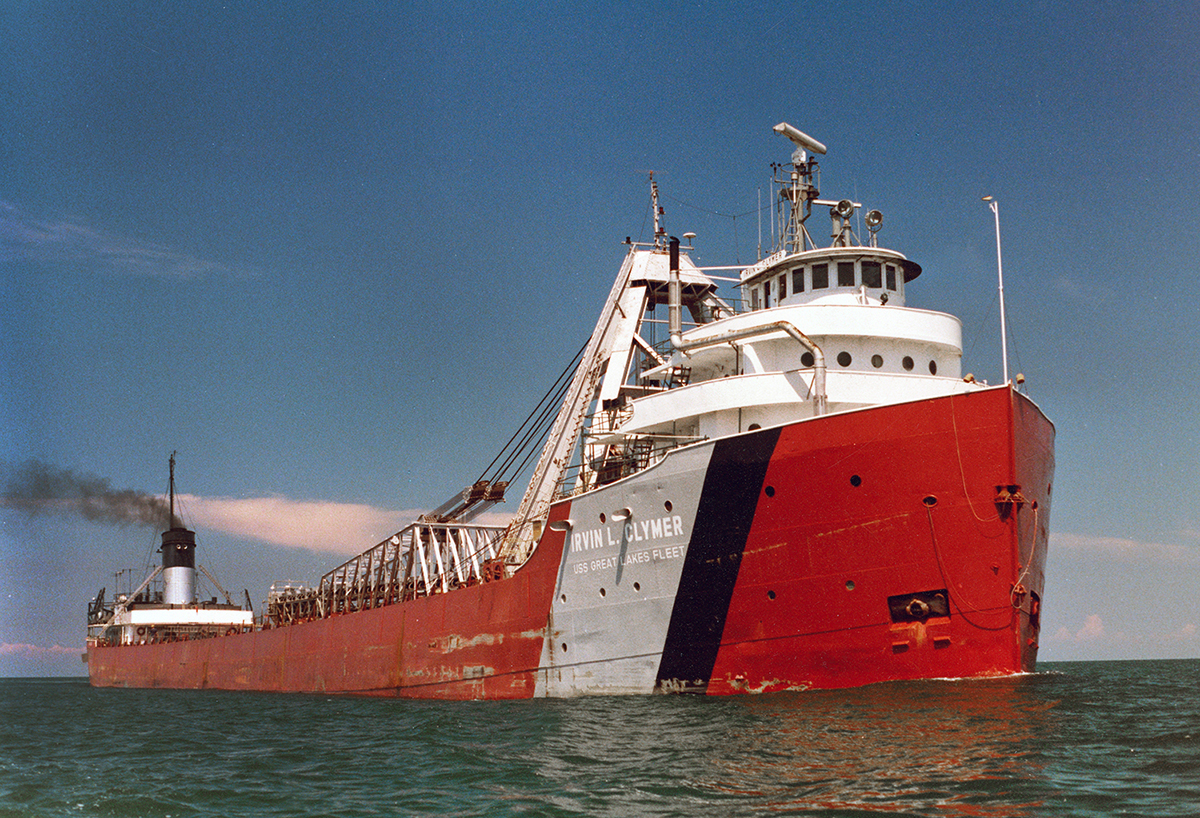 Today in Great Lakes History – May 15

After extensive renovation at Fraser Shipyard, the IRVIN L. CLYMER departed Superior, Wisconsin on May 15, 1981, and went to Duluth, Minnesota, to load 11,154 tons of taconite ore for Lorain, Ohio.

On 15 May 1901, the GILCHRIST (Hull #603) (steel propeller freighter, 356 foot. 3,871 gross tons) was launched at the West Bay City Ship Building Co. in West Bay City, Michigan, for the Gilchrist Transportation Company of Cleveland, Ohio. She lasted until 1943, when she was sunk in a collision on Lake Superior.

The PHILIP R. CLARKE, first of the AAA class of vessel, began her maiden voyage from Lorain, Ohio, on this date in 1952.

On 15 May 1854, GARDEN CITY (wooden passenger/package side-wheeler, 218 foot, 657 tons, built in 1853, at Buffalo, New York) was sailing from Chicago to the Soo in a storm when she went on Martin Reef, west of Detour, Michigan, and was wrecked. Her passengers were picked up by the steamer QUEEN CITY.

May 15, 1992 — The BADGER was rededicated and began a new career as a non-railroad carferry.

At 3:30 a.m., 15 May 1874, the tug TAWAS came along side of the schooner ZACH CHANDLER several miles off shore from Sand Beach, Michigan on Lake Huron. The boiler of the TAWAS exploded and she sank. Capt. Robinson, 2nd Engineer Dyson, Firemen Thomas Conners and James McIntyre, and Lookout Dennis Burrow were all on the tug and died in the explosion. The blast tore the CHANDLER’s sails and rigging, and caused the death of one of her officers when he was struck on the head by a flying piece of debris. The CHANDLER drifted away in the heavy seas, but returned to pick up five survivors from the water. The TAWAS was built at Vicksburg, Michigan by Myron Williams in 1864. Her dimensions were 95-foot x 18-foot, 6-inches x 8-foot, 6-inches. She carried the two old engines from the tug BLISH, which when new were 11-1/2 inches x 20 inches, but having been bored out several times, were 15 inches x 20 inches at the time of the explosion. Her boiler was built by Mr. Turnbull of Corunna, Ontario.

1907 – SAXON ran aground near Caribou Island, Lake Superior, and dumped about 1,000 tons of ore overboard before being released. The ship went to the Atlantic in 1918 and was scrapped at Copenhagen, Denmark, as c) ANNE JENSEN in 1927.

1923 – PERE MARQUETTE 4 and PERE MARQUETTE 17 collided in fog off Milwaukee and the former sustained severe damage above the waterline and was laid up.

1929 – RALPH BUDD stranded at Saltese Point, near Eagle Harbor, Mich., and was abandoned to the underwriters. The grain-laden vessel was released by Reid and sold to Canadian interests. It was scrapped at Hamilton as b) L.A. McCORQUODALE of the Upper Lakes Shipping fleet in 1966.

1963 – LOBIVIA, WESTMOUNT and ROGERS CITY were in a three-way collision in the St. Clair River at Port Huron but there was only minor damage.

1967 – GOLDEN HIND was loaded with grain when it stranded off Cassidy Point, Lake Erie, and was holed in the forward compartment.

1968 – The stern cabins of HOMER D. WILLIAMS were damaged from a collision with WHEAT KING in the St. Marys River and this ship was repaired at Lorain. The latter vessel received bow damage that was repaired at Port Weller.

1972 – The Dutch freighter COLYTTO first came through the Seaway in 1963 and made 8 trips to the end of 1966. It was swept ashore by a typhoon near the mouth of the Limpopo River off the coast of Mozambique as b) CAPE NERITA on this date in 1972. All on board were rescued but the ship was abandoned on the beach as it was not feasible to dig the ship out by a canal. The nearest road was 25 miles away so the hull was not scrapped either.

1999 – The former sandsucker NIAGARA II was scuttled as an attraction to divers off Tobermory, ON. 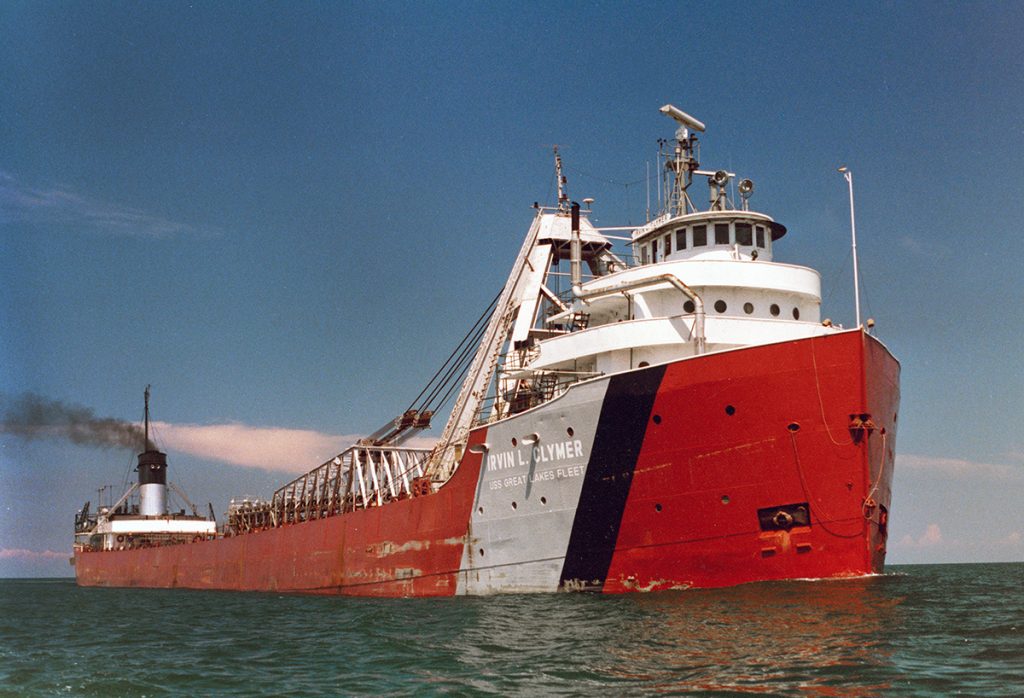 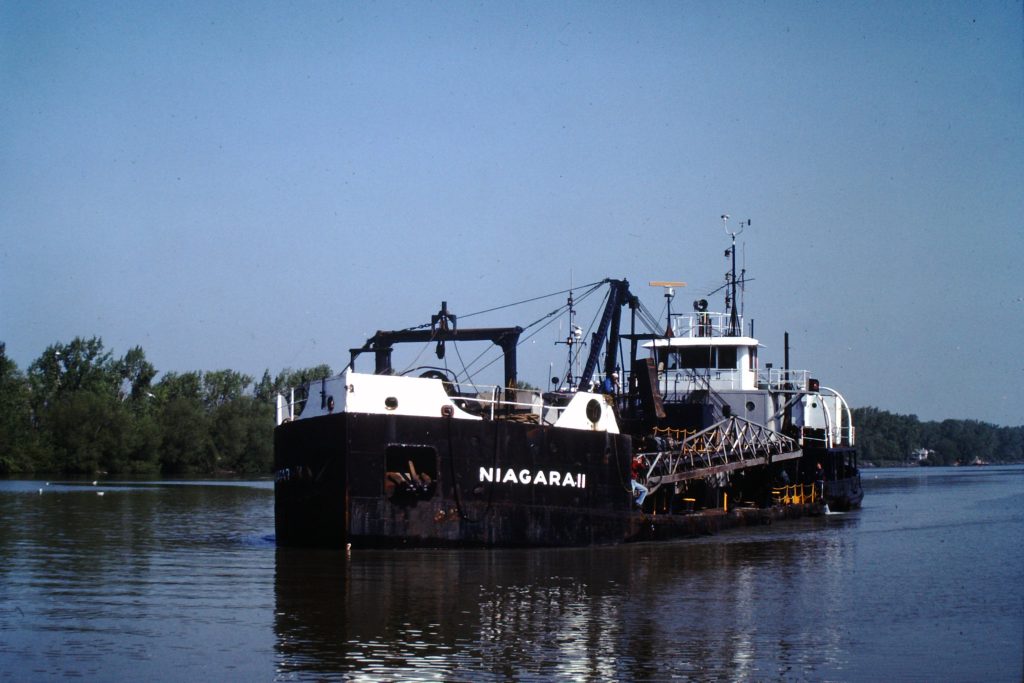 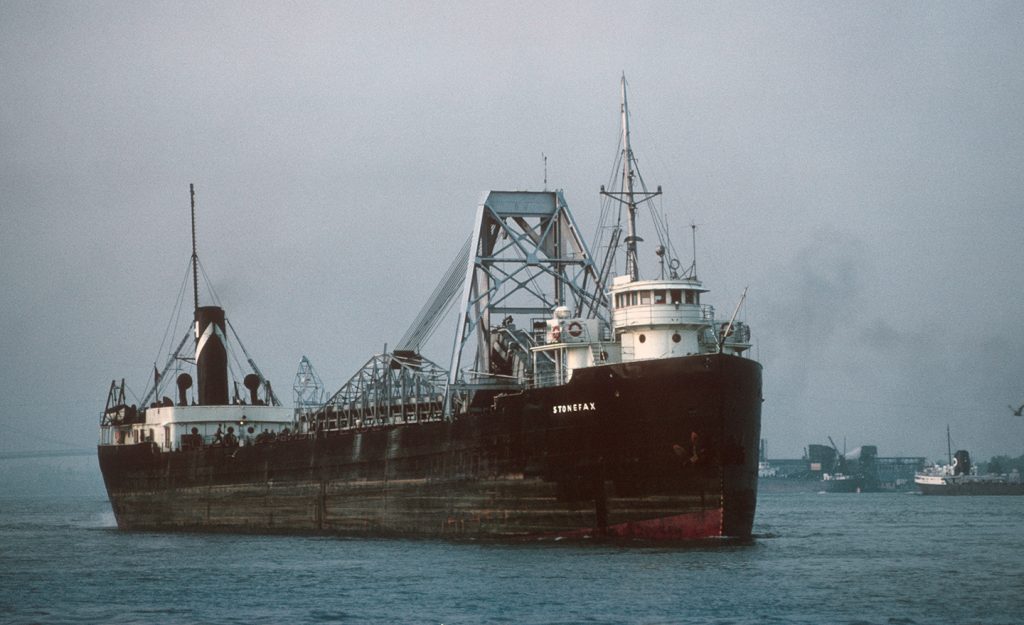 Stonefax on the Detroit River in 1965. Hal Jackson 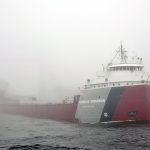 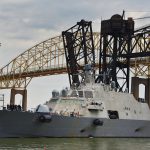