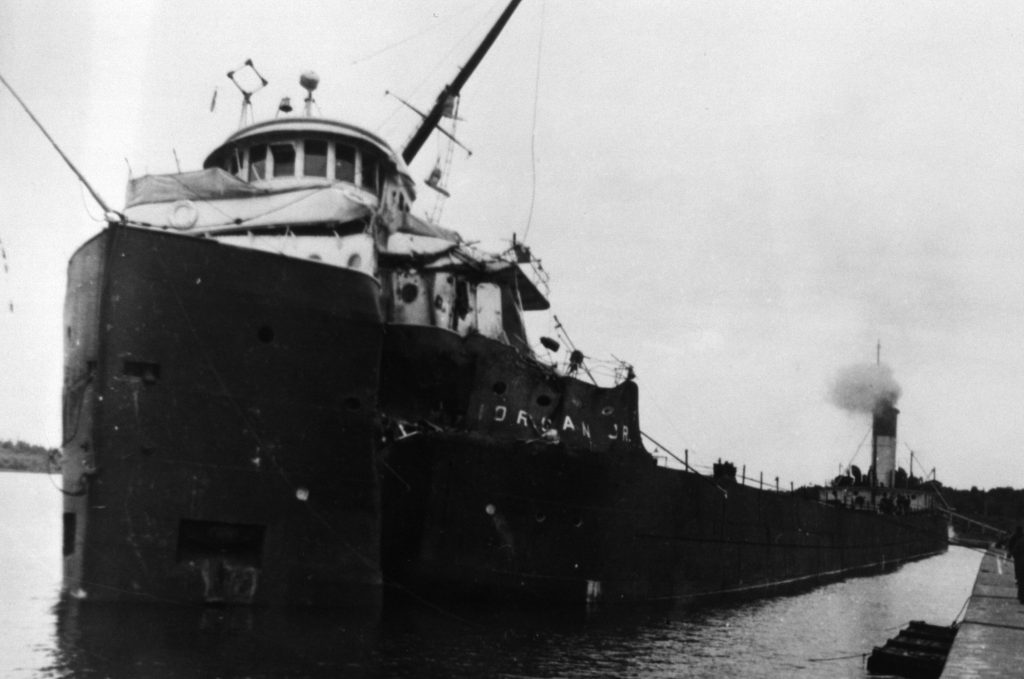 In 1976 the NEPCO 140, carrying six million gallons of No. 6 bunker oil and being pushed toward Oswego by the tug EILEEN C., grounded on the shore of Wellesley Island in the American Narrows section of the St. Lawrence River, just upstream from Alexandria Bay, N.Y. The grounding occurred about 1:35 a.m. in heavy fog and was followed by a second apparent grounding further up river, just before the barge reached the Seaway anchorage site off Mason’s Point, some four miles above the initial grounding site. In all, over 300,000 of the thick crude was spilled into the River, creating the largest slick ever to pollute an inland U.S. waterway to that day. Seaway traffic was halted immediately, sending at least 20 ships to anchor. Within hours, over 20,000 feet of boom were deployed, but the spill moved steadily down river, coating granite shoreline, trapping waterfowl, forcing boat owners to pull their boats, and oozing into sensitive marshland, particularly Chippewa Bay in New York waters. Some oil eventually reached as far down the river as Lake St. Lawrence and coated shoreline along the Long Sault Parkway on the Canadian side of the lake. Clean-up lasted into the fall and cost in excess U.S. $8 million.

On 23 June 1903, the tug O.W. CHENEY steamed out of Buffalo harbor in heavy fog to tow the steamer CHEMUNG into the harbor. The tug ran too close to the oncoming steamer, was struck by the bow, and the CHENEY overturned and sank. Three crewmen were killed; two survivors were picked up by the tug FRANK S. BUTLER.

On 23 June 1969, RALPH MISENER (steel propeller bulk freighter, 730 foot, 19,160 gross tons, built in 1968, at Montreal, Quebec) transited the Soo Locks upbound for the first time. She had an innovative self-unloading system with twin booms. The movable crane was equipped with a chain of buckets so it could discharge cargo from either side. This unloading system only lasted until 1976, when it was severely damaged in a squall on Lake Michigan. The vessel was then converted from a combination self-unloader/bulk carrier to a bulk carrier. She was renamed b.) GORDON C. LEITCH in 1994.

In 1926, the GLENMHOR (Hull#16), the name was soon corrected to GLENMOHR, was launched at Midland Ontario by Midland Shipbuilding Co., for Great Lakes Transportation Co., (James Playfair). She was 6 feet wider and 4 feet shallower than the largest ship at that time. Purchased by Canada Steamship Lines in 1926, renamed b.) LEMOYNE. Scrapped at Santander, Spain in 1969.

Launched in 1972, was the ALGOWAY (Hull#200) at Collingwood, Ontario, by Collingwood Shipyards Ltd., for Algoma Central Railway. SHe was scrapped at Port Colborne, Ontario, in 2018-19

The first whaleback barge, 101, was launched along the shore of St. Louis Bay near Duluth, Minnesota, on 23 June 1888. Captain Alexander Mc Dougall, the inventor and designer, was there along with his wife, her sister-in-law and several hundred spectators. As the vessel splashed in to the bay, Mrs. Mc Dougall is supposed to have muttered, “There goes our last dollar!”

1942 – EUGENE J. BUFFINGTON struck Boulder Reef, Lake Michigan and the hull cracked in two places. The vessel as on the rocks for 25 days until it could be strapped together and refloated. The ship was towed to Chicago for one of the largest repair jobs in Great Lakes history.

1948 – CRETE and J.P. MORGAN JR. were in a head-on collision, in fog, off the Apostle Islands, Lake Superior. Both ships suffered extensive damage. Two were killed, 3 more injured, aboard the latter steamer. ALTADOC and E.A.S. CLARKE also collided in fog near the Apostle Islands but the damage, while requiring repairs, was less serious.

J.P.Morgan Jr. after being struck by Crete in 1948. Boatnerd Collection 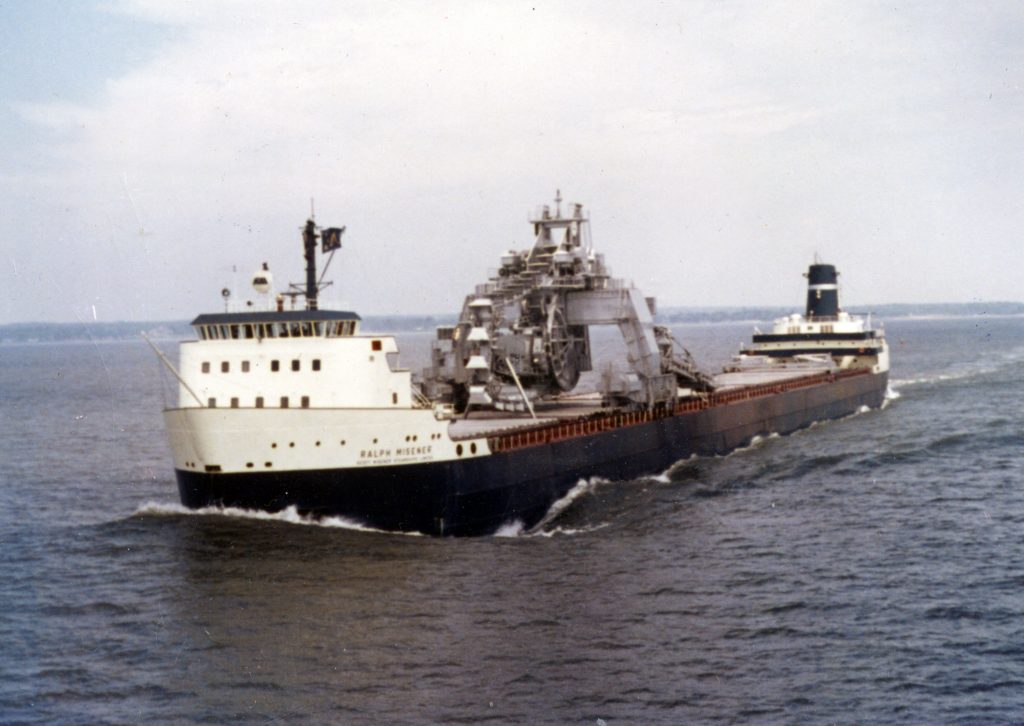 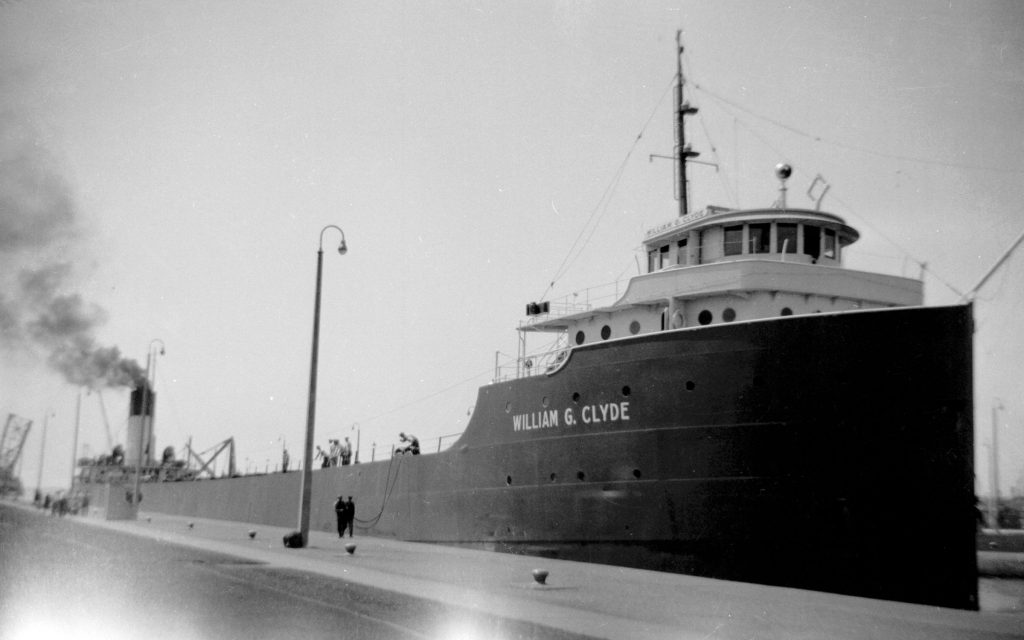 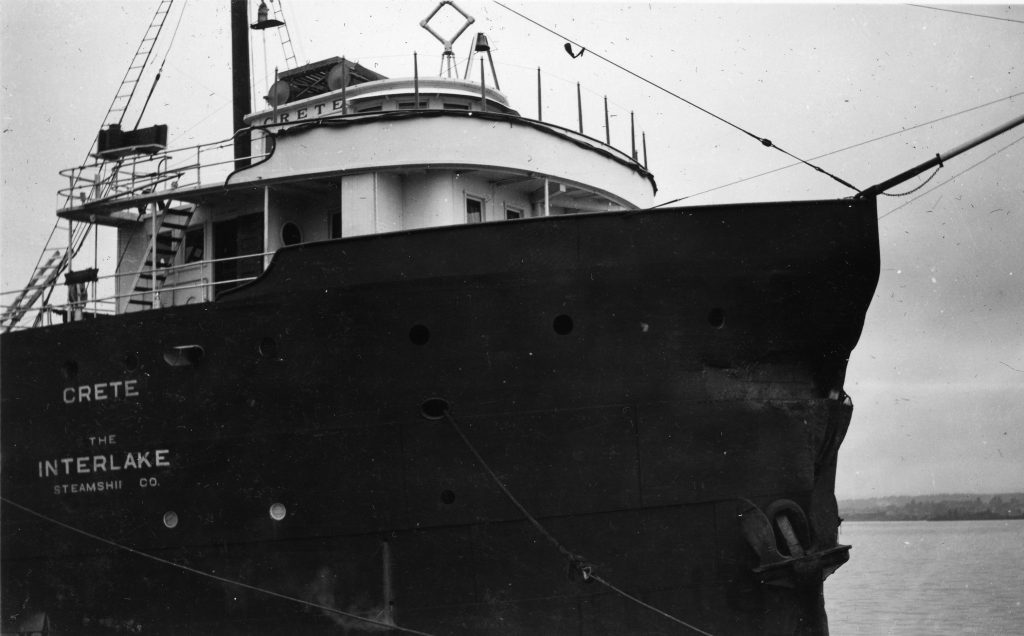 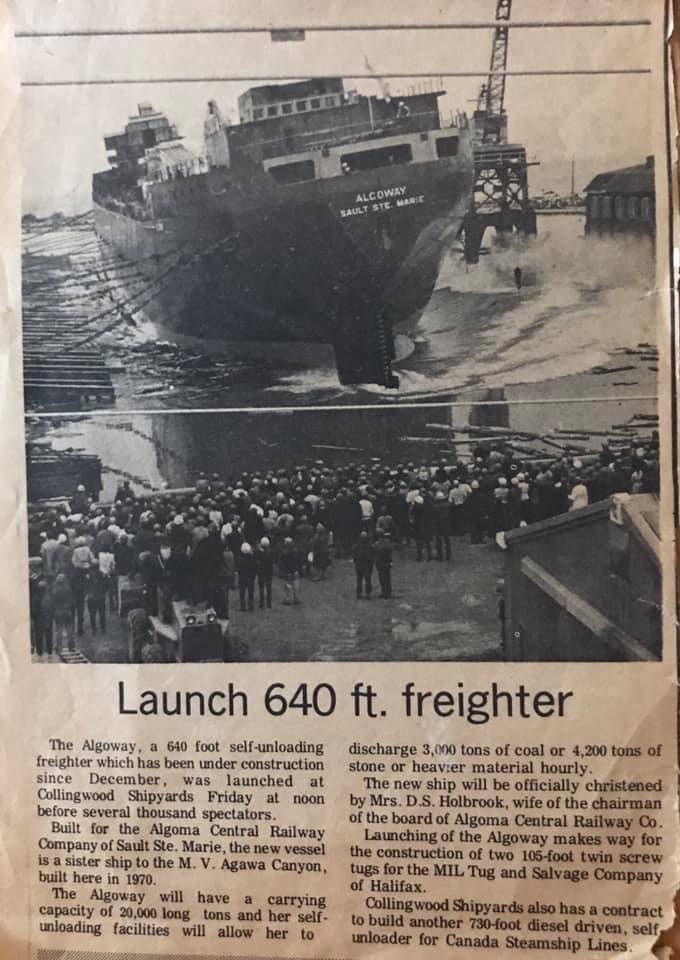 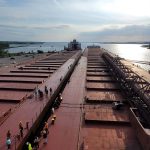 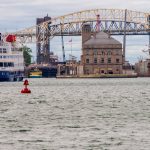