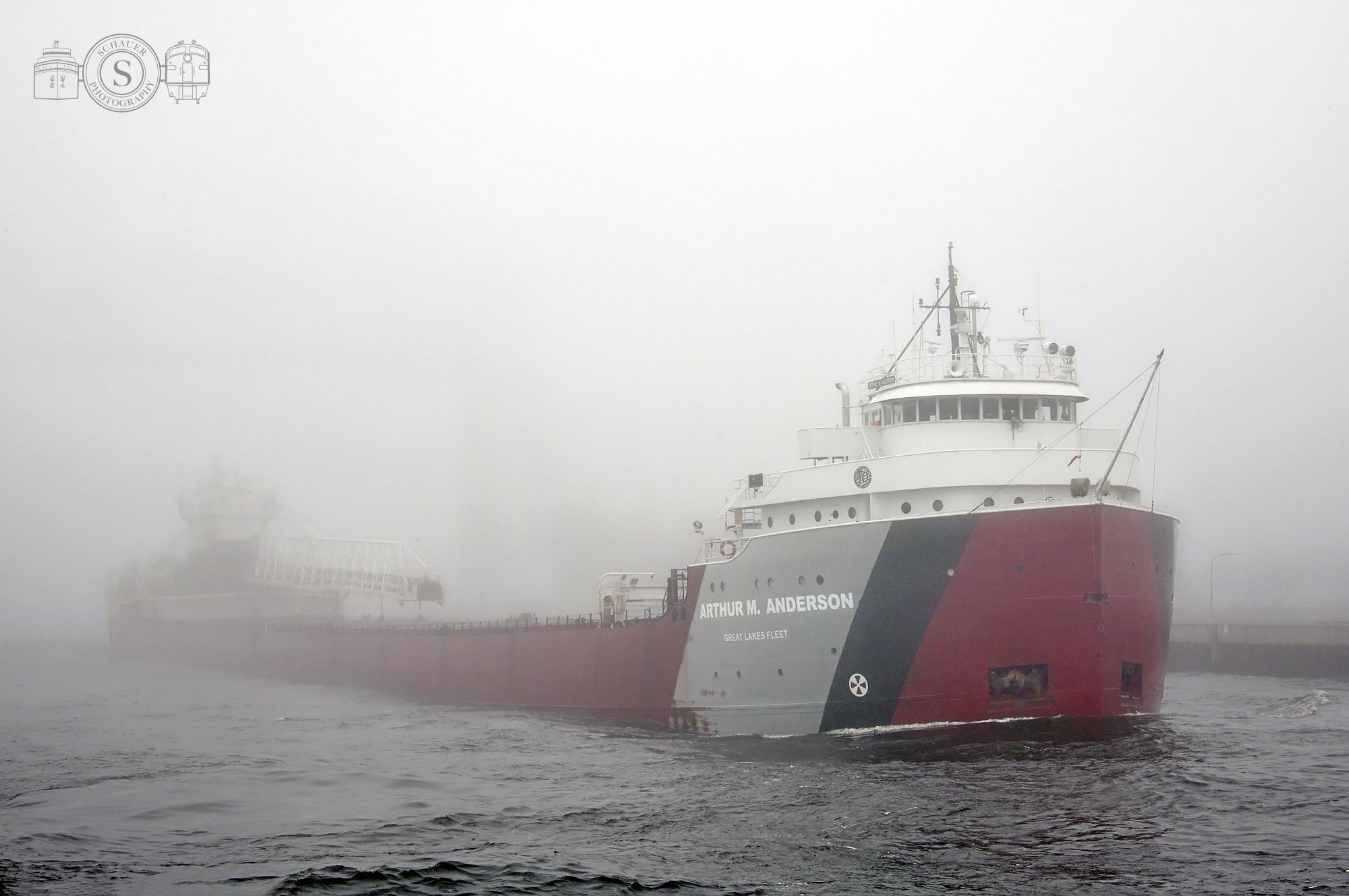 After loading Minntac pellets at CN 6, Arthur M. Anderson made her way outbound under the Aerial Lift Bridge at 10:14. The classic AAA laker is due next at the southern end of Lake Michigan to unload her cargo at U.S. Steel’s Gary Works. Taking her place at CN was James R. Barker, who arrived Duluth around 15:00 and proceeded to the shiploader to load taconite. Shortly after 20:00, Michipicoten dropped anchor outside the Superior Entry awaiting her turn at BNSF 5 to load taconite. Burns Harbor would get underway from the dock with Hibtac pellets shortly after 23:00 and cleared the piers at 23:32 bound for her namesake port; at the same time, Manitoulin cast off from Lakehead Pipeline and shifted to BNSF at midnight. Vlieborg remains at the Gavilon elevators loading beet pulp pellets.

Two Harbors, MN – Silver Bay, MN – Gary Putney
Mesabi Miner arrived Two Harbors on Friday at 02:10. Once the vessel’s bow made it to the dock, she backed out with her stern even with the lighthouse. She then came back in and proceeded to the dock where, at 19:15, she still loads. Due in Two Harbors on Saturday is Edgar B. Speer; at 19:15 on Friday, she is east of the Keweenaw. Due at Cliffs Northshore Mining in Silver Bay on Friday is the Dirk S. VanEnkevort/Michigan Trader. At 19:15, she was approximately 15 miles east of Silver Bay.

Escanaba, MI – Joshua Hebeisen
USS Minneapolis-St. Paul (LCS-21) departed at 09:24, presumably en route to Duluth-Superior where she will be commissioned next weekend. As of Friday night, she is currently moving back and forth in Lake Huron near the Spectacle Reef Light for unknown reasons.

Southern Lake Michigan Ports – Joshua Hebeisen
Calumet Harbor, IL: Loaded with cement products, Caroline McKee/Commander arrived just before midnight Thursday night to make the three-hour trek down the Calumet River to St. Marys Cement. At 06:20 Friday morning, saltwater vessel Janis was inbound for the Chicago Rail and Port Dock. As of Friday evening, Caroline McKee is pushing Commander up the river after the pair finished unloading at St. Marys.
Buffington, IN: Joseph L. Block arrived Buffington Harbor and tied up at the dock 18:00 Friday night.
Indiana Harbor, IN: Wilfred Sykes arrived at 13:47 to unload south of 7H before departing for Burns Harbor at 17:41.
Burns Harbor, IN: After making the short voyage from Indiana Harbor, Wilfred Sykes arrived at 20:00 for the Cleveland-Cliffs dock. Federal Churchill departed Metro Ports for Talbot, United Kingdom within the hour.

Detroit, MI – Windsor, ON – Joshua Hebeisen
Spartan/Spartan II stopped to refuel at Warner Petroleum’s Mistersky facility between 01:11 and 04:06 Friday morning before departing for Three Rivers Anchorage in Canada. Shortly after 06:30, Federal Columbia arrived for Nicholson Detroit and Atlantic Huron departed Windsor Salt for Chicago. Presque Isle arrived at 8:01 and tied up at Mistersky to fuel on her way to Two Harbors; she departed at 10:12. In the meantime, Exeborg departed Nicolson Ecorse upbound for Chicago. Dorothy Ann/Pathfinder took Presque Isle’s place at the fuel dock after spending several hours on the hook down the Detroit River waiting their turn. The pair departed for Milwaukee at 12:24, and fleetmate Paul R. Tregurtha was the next Mistersky customer shortly after 15:00. In Windsor, Federal Baltic departed ADM at 15:32 for an unknown destination before Cuyahoga was inbound for Windsor Salt a little over two hours later. The River Rouge saw a pair of classic Interlake lakers late evening; Hon. James L. Oberstar arrived at 18:37 and proceeded to Cleveland-Cliffs Dearborn Works with Tilden pellets from Marquette, while Herbert C. Jackson made her way up the river shortly after 20:00 to unload at the Levy dock. The Queen of the Lakes set sail from Mistersky upbound for Duluth-Superior at 22:00, and Rt. Hon. Paul J. Martin pulled up at Sterling Fuels at midnight.

Lake Erie Ports – Bill Kloss
Monroe, MI: Everlast/Norman McLeod arrived at 06:56. Paul R. Tregurtha departed for Superior at 11:04.
Toledo, OH: Wilf Seymour/Alouette Spirit departed for Detroit at 04:32. Algoma Harvester arrived at 15:35 and anchored in Lake Erie. Prentiss Brown/St. Marys Challenger arrived Friday evening to unload at St. Marys Cement.
Kingsville, ON: Cuyahoga arrived at 09:45 with a second load of stone for Southwestern Sales Co. Once empty, she left for Windsor at 14:36.
Marblehead, OH: Cuyahoga arrived at 01:29, loaded at Lafarge and left at 06:15 for a return to Kingsville.
Cleveland, OH: Dorothy Ann/Pathfinder departed Thursday night with salt for Milwaukee. Ocean Explorer arrived at 07:36 and is at Dock 26E at the Port. American Mariner arrived at 20:34 to unload at the Bulk Terminal.
Nanticoke, ON: CSL Tadoussac departed for Bowmanville at 10:30. Thunder Bay arrived at 14:21 to unload ore at Stelco. Algosea left for Halifax at 15:58. Algonova is at Imperial Oil.

Buffalo, NY – Brian Wroblewski
Tug/barge combo New York/Double Skin 509A arrived for the Marathon dock in Tonawanda at 07:00 Thursday. New York arrived pushing 509A in the notch, met Vermont off the Erie Basin, and then headed for the Black Rock Lock, arriving there around 08:00. Vermont helped them turn around in the Niagara River below the South Grand Island Bridge, and they were all tied up by 09:30. After Vermont departed for Buffalo, tug New York broke out of the notch of her barge and made a quick run up to the Suite Kote dock for an unknown reason. Later on, they rafted to the starboard side of the barge back at Marathon and spent a couple of days at the pier.

Hamilton, ON – Joshua Hebeisen
Algoma Equinox was an early-morning arrival Friday, making her way inbound with ore for ArcelorMittal Dofasco at 01:41. Lake St. Clair was outbound 30 minutes later with grain from G3 for Huelva, Spain. Federal St Laurent arrived at 14:06 for Federal Marine Terminals 14 West with steel; the Equinox departed for Nanticoke at 18:20. Bogdan is at P&H loading grain, Drawsko is across from Federal St Laurent discharging steel coils, Shoveler is offloading fertilizer at Agrico, and tankers Ruby-T and MTM Singapore are waiting at anchor in the inner harbor. 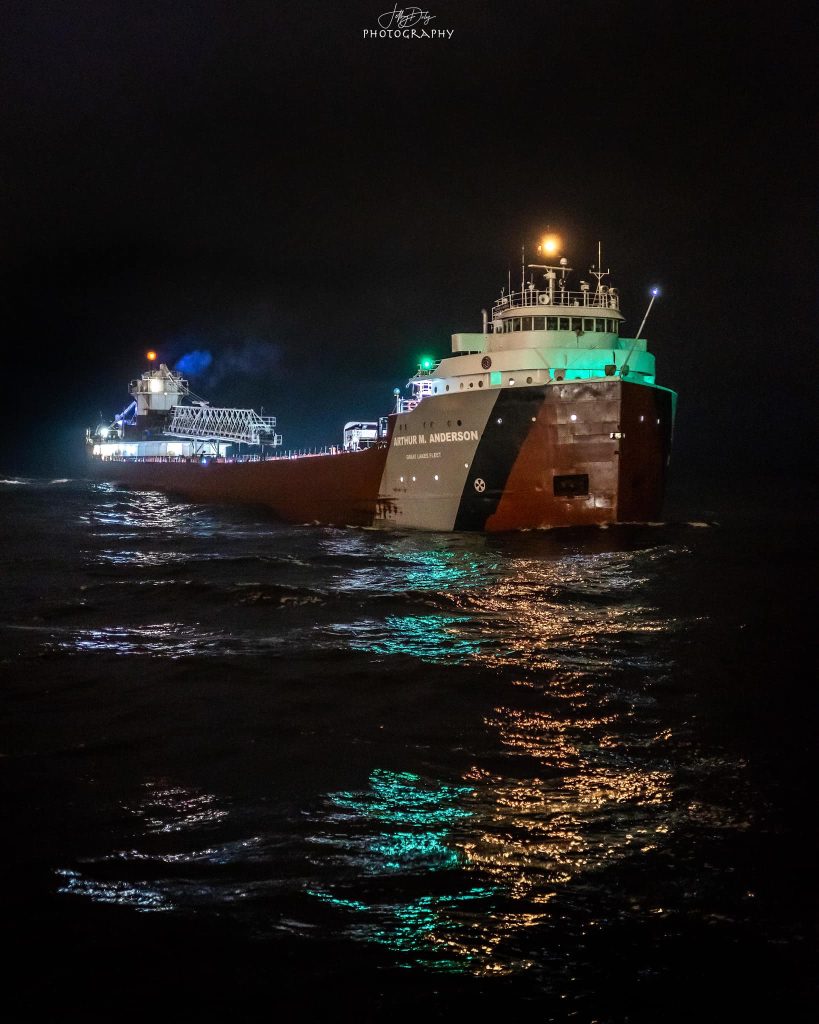 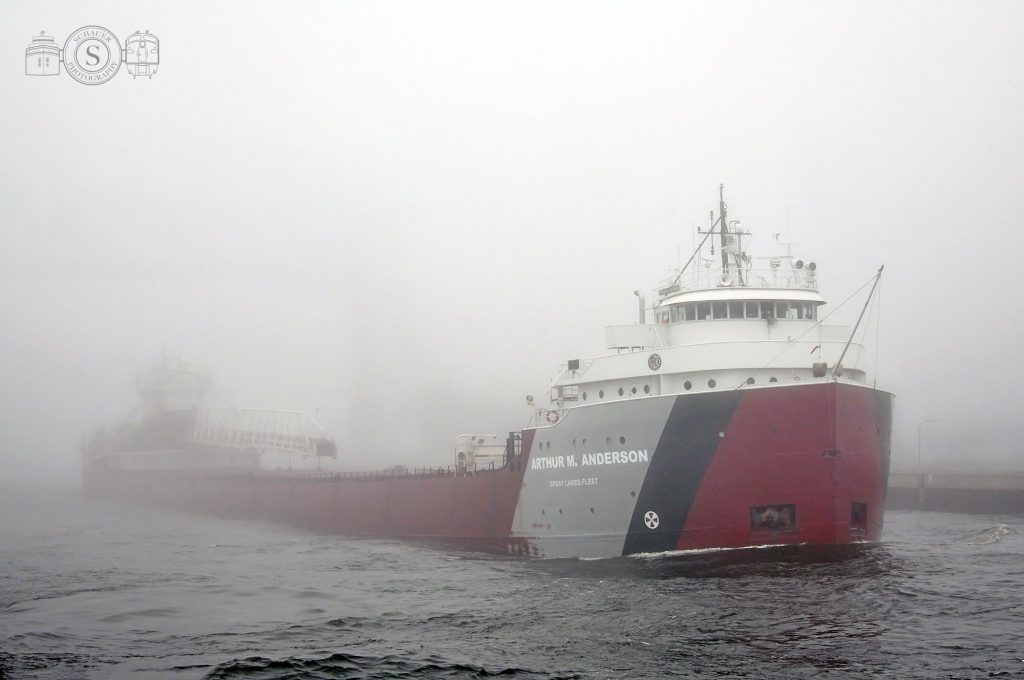 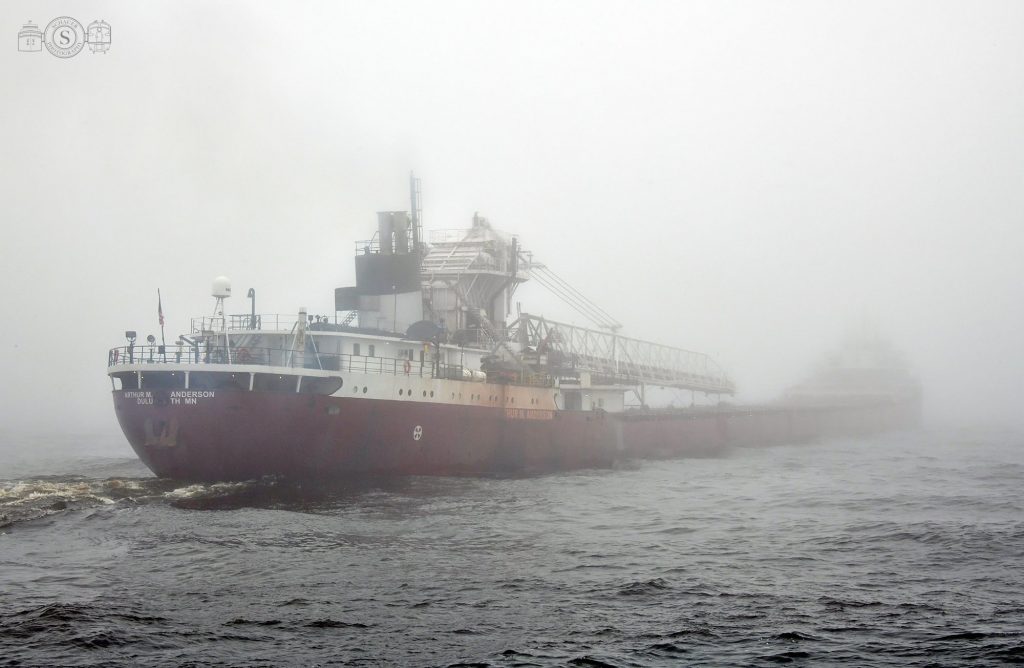 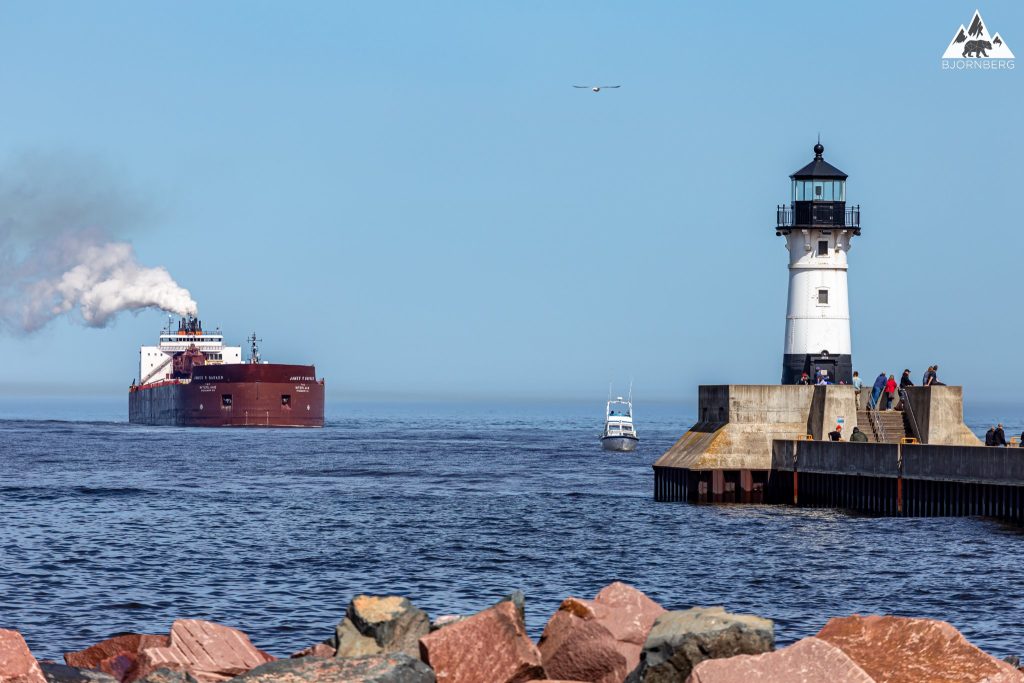 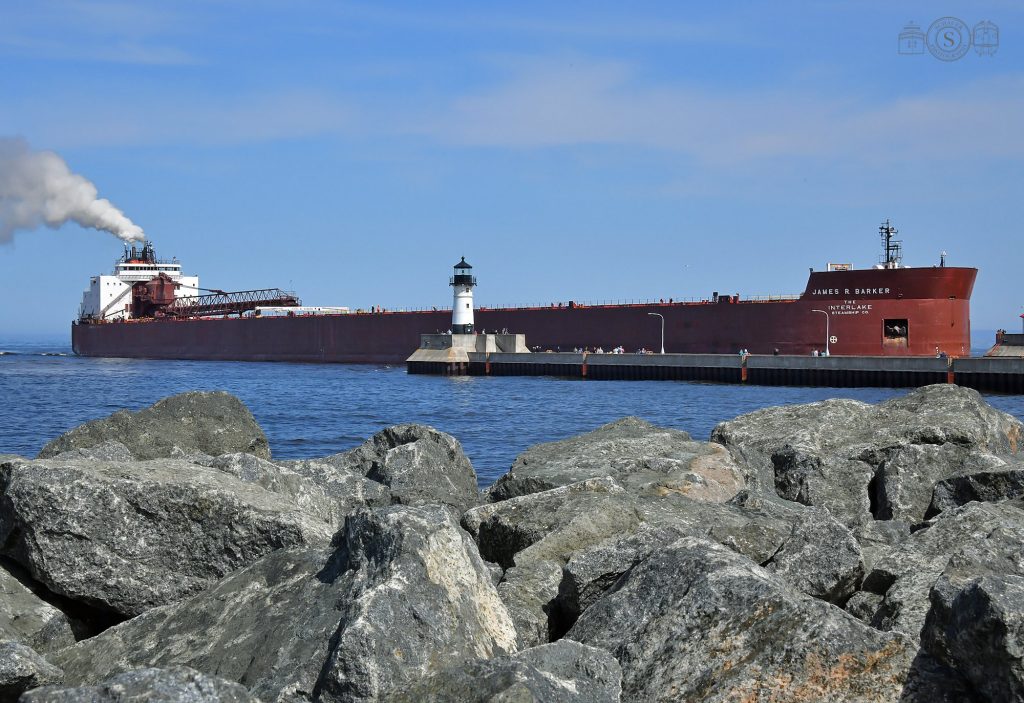 James R. Barker heads to CN for a load of ore. - David Schauer 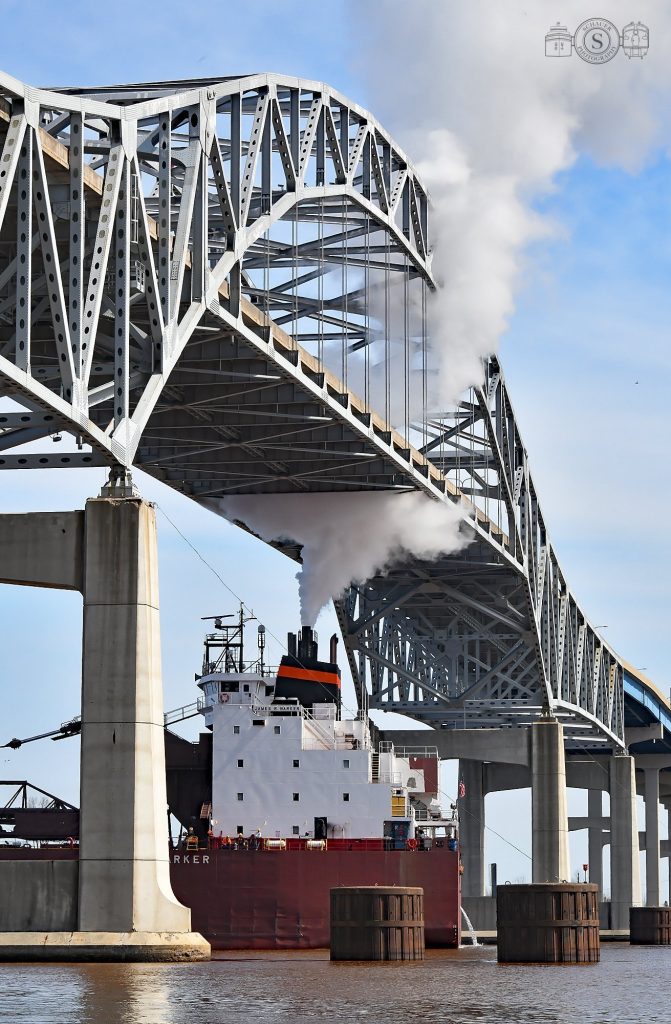 James R. Barker scrubbing the Blatnik Bridge with the plume from her exhaust scrubbers as she proceeds to CN 6 in West Duluth. - David Schauer 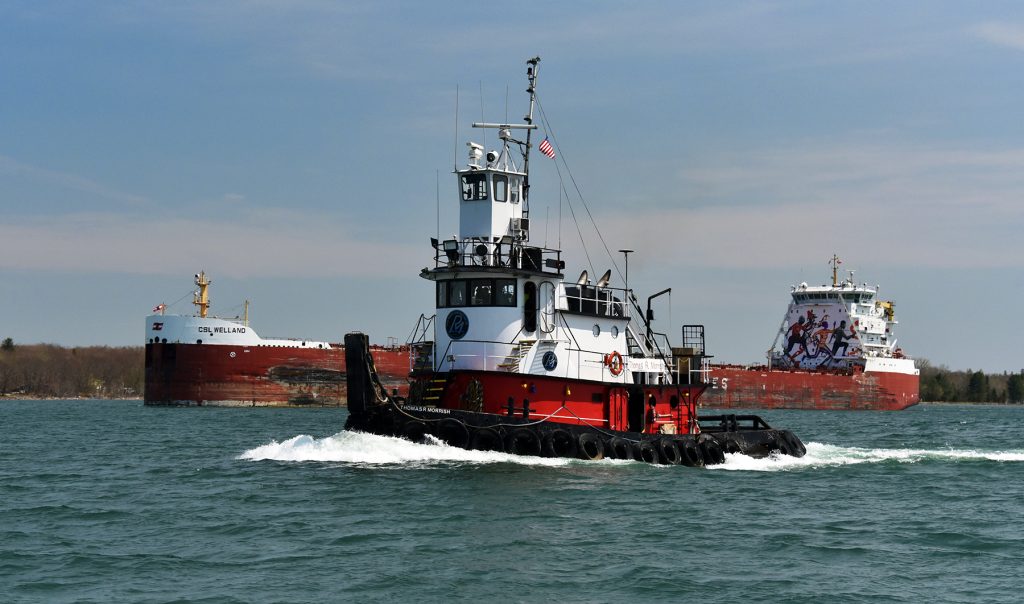 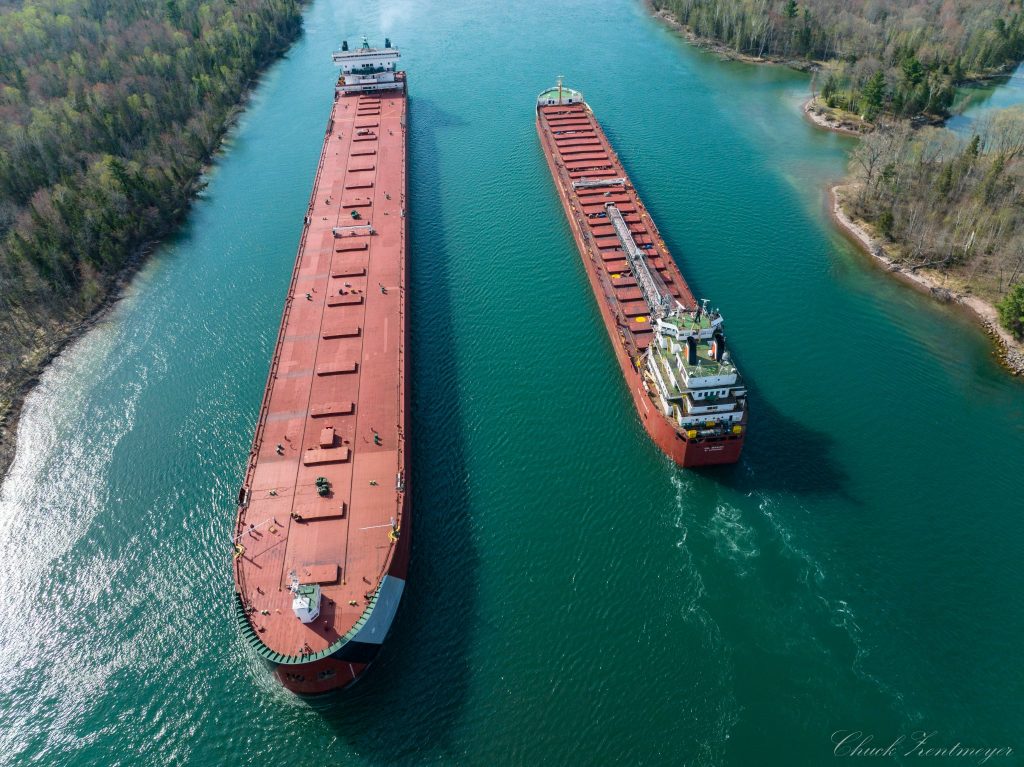 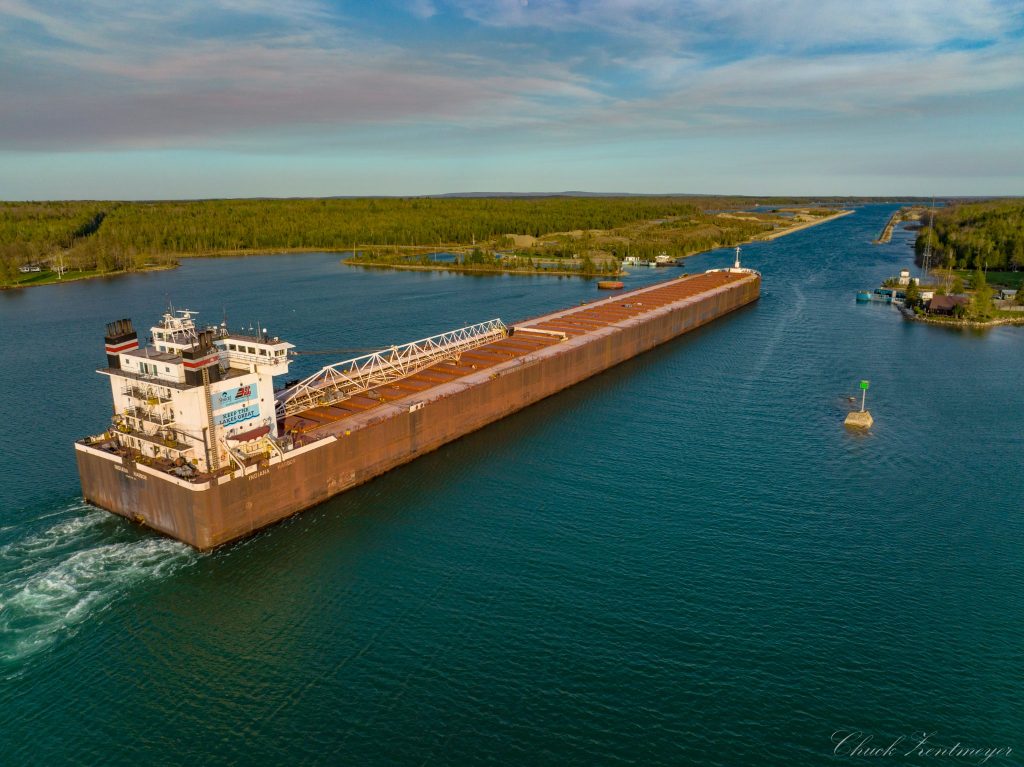 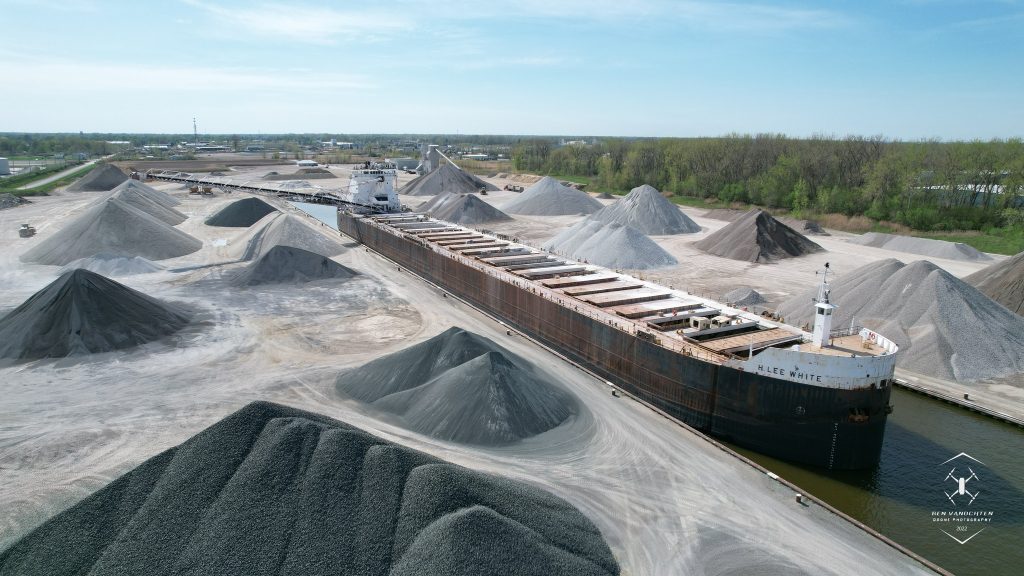 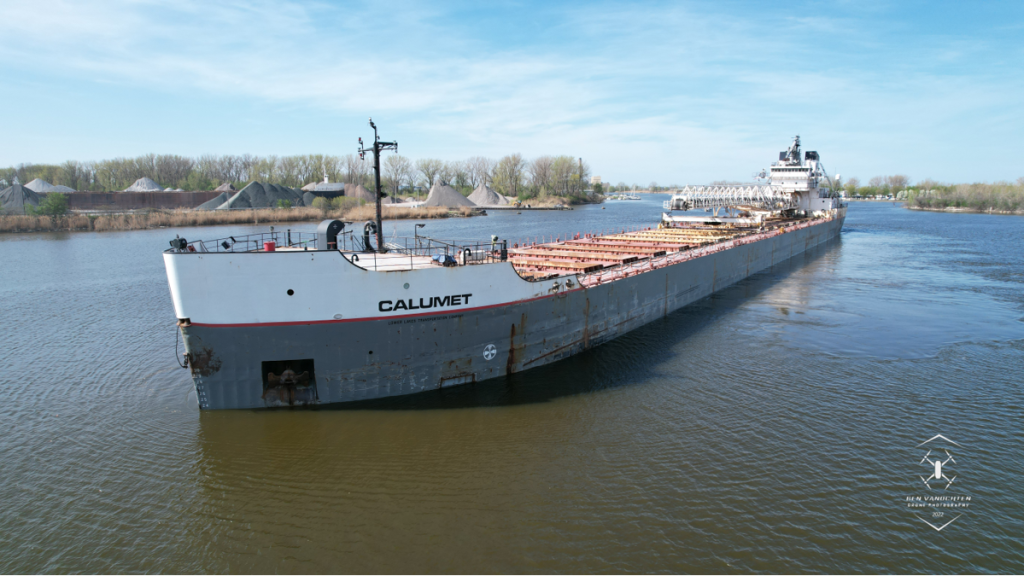 Calumet in the Saginaw River heading towards the Bay Aggregates Dock in Bay City. - Ben VanOchten 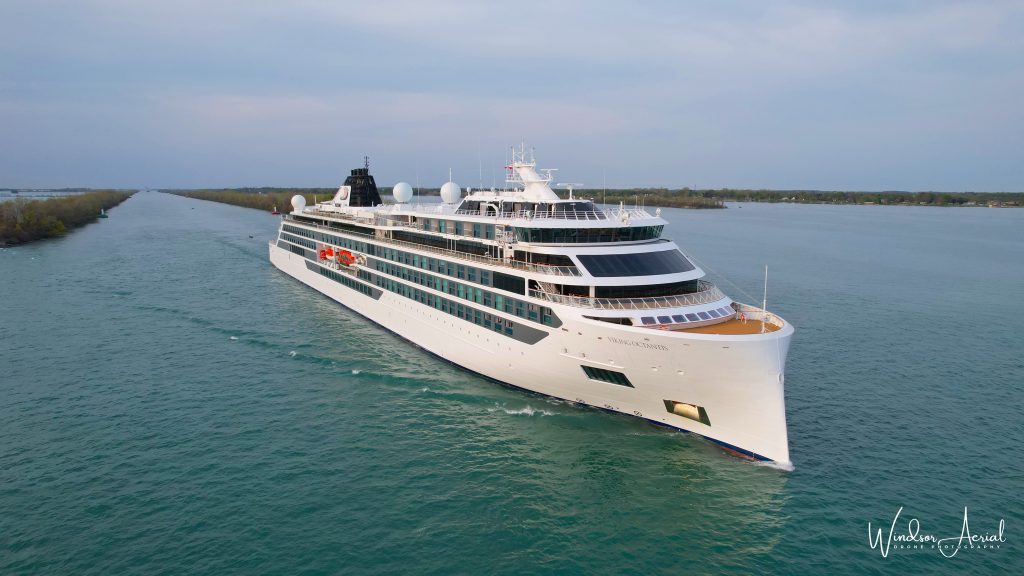 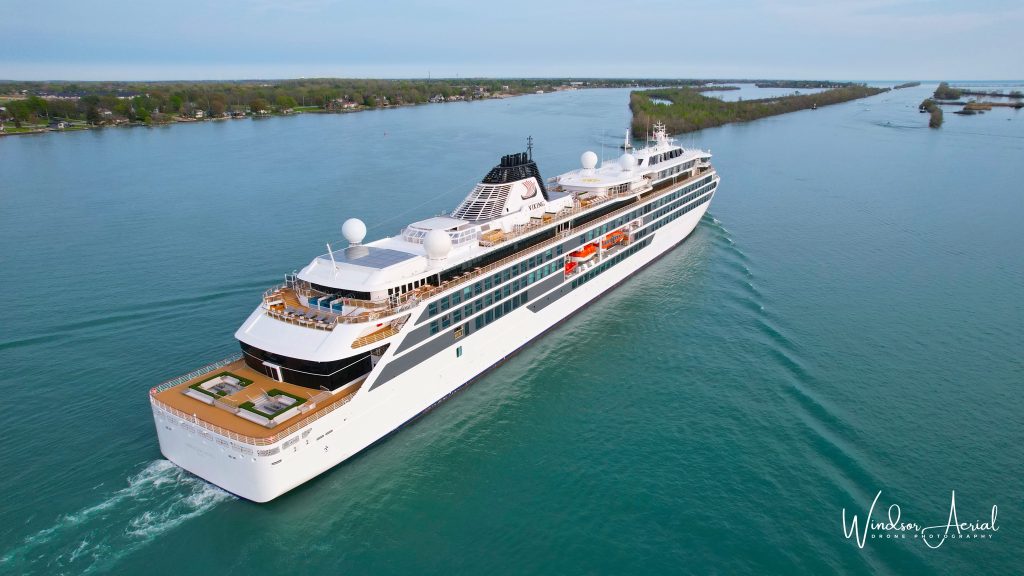 Viking Octantis on her way to Point Pelee. - Michael Chase 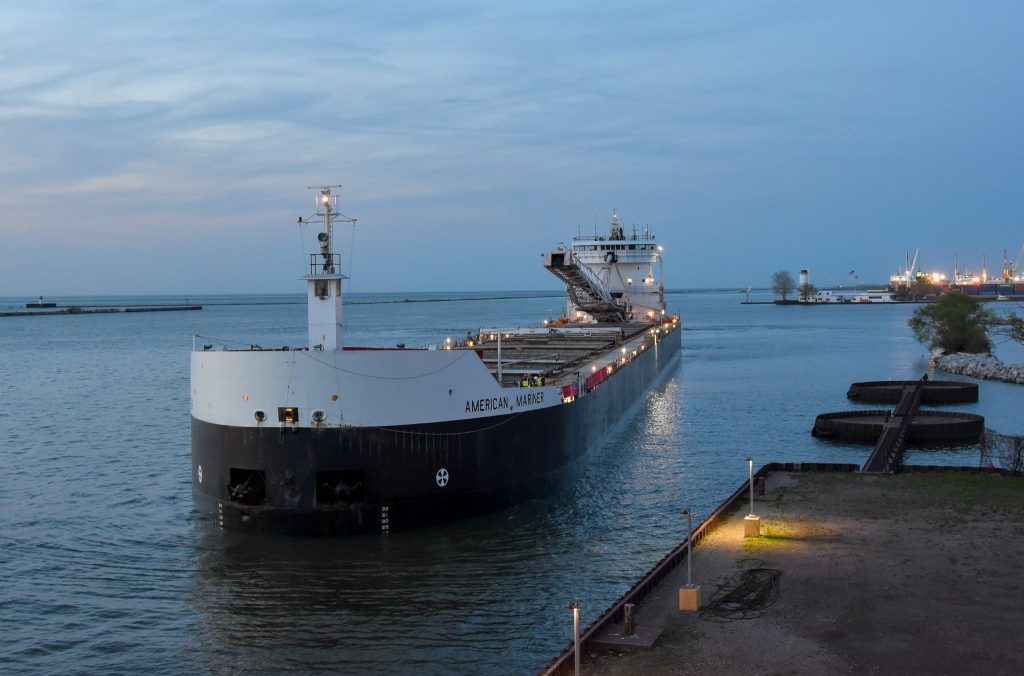 American Mariner arrives at the Cleveland Bulk Terminal with a load of Tilden pellets from Marquette; this may be the first time in a decade that Tilden product has been unloaded here. - Tom Burke 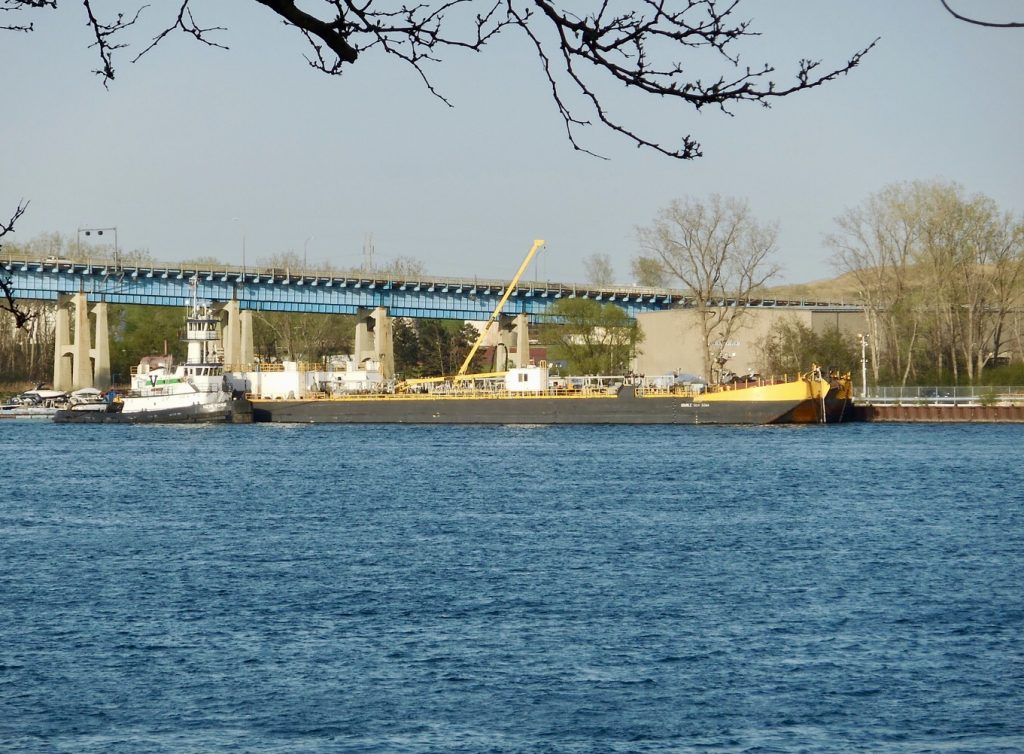 New York alongside Double Skin 509A at Marathon. - Brian Wroblewski 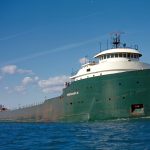 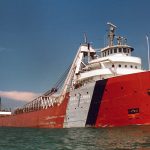 Today in Great Lakes History – May 15