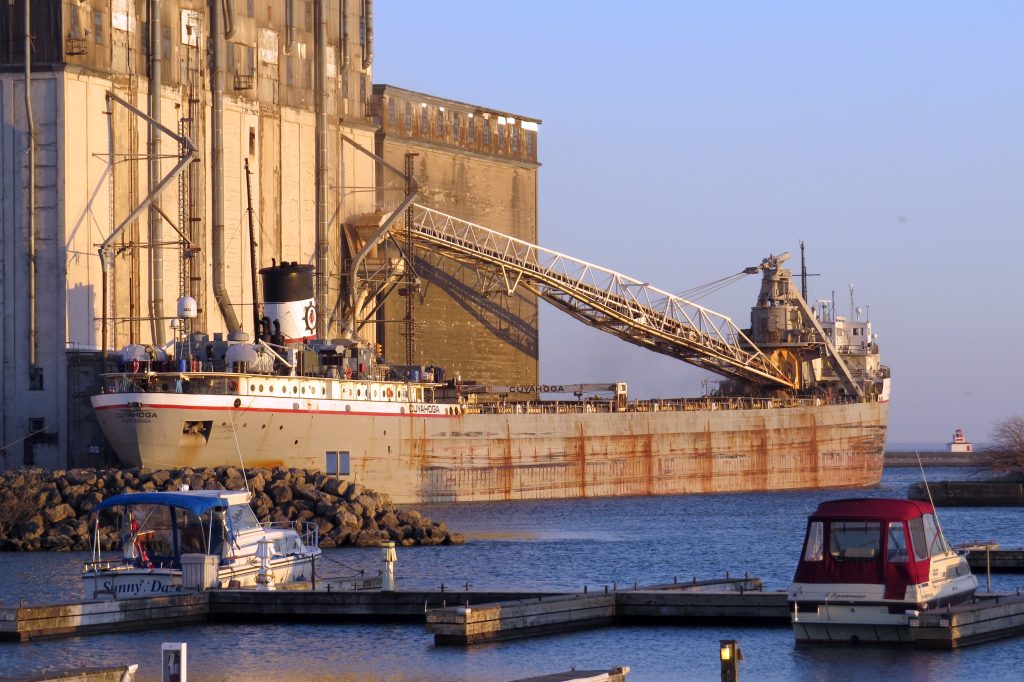 After American Century vacated the harbor basin and tied up at Midwest Energy to load coal following her late-night arrival on Tuesday, Hon. James L. Oberstar cast off from Hallett 5 and departed Duluth empty at 01:33 Wednesday for Marquette. American Integrity passed her in the lake and was inbound 20 minutes later, performing a spin near the Port Terminal and backing under the Blatnik Bridge to load ore at CN 6 in West Duluth. At the same time, John G. Munson made her way through the inner harbor after departing Hallett 5 and was outbound for Two Harbors at 02:24. On the Superior side of the harbor, CSL Niagara arrived at 08:47 to load taconite at BNSF 5. American Century departed Duluth at 12:53 for St. Clair, and the Niagara cleared the Superior piers minutes at 22:01 bound for Nanticoke. Over the course of the day, CSL Assiniboine and Burns Harbor had anchored off the Superior Entry waiting to load at BNSF after the Niagara, though as of midnight, neither had proceeded inbound. Vlieborg remains loading at Gavilon in Superior.

Marquette, MI – Joshua Hebeisen
American Mariner arrived at 11:09 to load ore at the north side of the LS&I dock and departed at 20:19 for Cleveland. Minutes later, Hon. James L. Oberstar was inbound the other side of the dock to load Tilden pellets.

Green Bay, WI – Jon Vandyke
Green Bay saw a busy day Wednesday, starting with Albert/Margaret arriving for their fifth trip into Green Bay from Sarnia at 08:58. The pair was carrying petroleum products for the U.S. Venture Terminal. American Courage arrived from Port Inland with limestone for Graymont at 09:48 and departed at 16:00. Alpena arrived with cement for Lafarge from her namesake port at 11:05, and Bradshaw McKee/St. Marys Conquest arrived at 18:36 from Charlevoix with cement for St. Marys Cement.

Waukegan, IL – Jim Marciniak
Giving one long blast of the horn to signal her departure, John J. Boland was outbound at 12:25 Wednesday.

Goderich, ON – Bruce Douglas
Greenwing departed Tuesday 17:16 downbound for Montreal. Algoma Sault is due next at Compass Minerals, followed by fleetmate Algoma Intrepid.

Detroit, MI – Windsor, ON – Joshua Hebeisen
Viking Octantis made her second trip to Detroit at 06:18 while downbound from her first cruise, once again tying up at Nicholson. She and her passengers left for Point Pelee at 18:14. While the Octantis was in port, Herbert C. Jackson finished unloading coal at Zug Island and departed northbound for an unspecified port. Federal Baltic remains loading at ADM on the Windsor side of the harbor.

Lake Erie Ports – Bill Kloss
Toledo, OH: Departures were Dirk S. VanEnkevort/Michigan Trader, both Joseph L. Block and Victory/Maumee for Calcite, and Cuyahoga for Marblehead. Belasitza was the lone arrival. Joyce L. VanEnkevort/Great Lakes Trader is in port.
Marblehead, OH: Laura L. VanEnkevort/Joseph H. Thompson departed for Cleveland at 05:21. Cuyahoga was a late night arrival.
Sandusky, OH: Michipicoten departed at 03:48 with coal for Algoma Steel in Sault Ste. Marie, ON. Saginaw loaded coal at Norfolk Southern and left for Sault Ste. Marie at 14:48.
Cleveland, OH: Dorothy Ann/Pathfinder arrived at 06:27 to load a shuttle at the Bulk Terminal. The cruise ship Ocean Navigator arrived at 07:00 and went to Dock 20W at the Port. Laura L. VanEnkevort/Joseph H. Thompson arrived at 10:20 with stone for RiverDock. Freshly refitted G-tug Arizona departed at 16:20. Federal Beaufort arrived at 21:59 and went to Dock 22. At the Port are Hudsongracht, Exeborg, Harvest Spirit and Federal Fraser.
Fairport Harbor, OH: Dorothy Ann/Pathfinder departed for Cleveland at 03:30.
Ashtabula, OH: Melissa G is in port, as is Clyde S. VanEnkevort/Erie Trader.
Conneaut, OH: Edgar B. Speer arrived at 07:33 to unload ore at the P&C dock.
Nanticoke, ON: Algoma Hansa departed for Tracy at 20:37. Bluebill is at Stelco. Algosea and Algonova are both at Imperial Oil.

Hamilton, ON – Joshua Hebeisen
After spending several days in port unloading steel slabs at Federal Marine Terminals 12 East, Algoma Guardian departed for Port Weller Dry Docks at 05:41. Word on social media indicated that she would be receiving a five-year survey and additional repairs. Her fleetmate Algoma Transport was inbound at 09:01 with coal for ArcelorMittal Dofasco. At 09:58, Federal Mayumi departed for Ireland after loading grain at P&H; saltie Bogdan immediately arrived from anchorage to take the Mayumi’s spot at the dock. Algoma Harvester arrived at 15:58 with ore for ArcelorMittal, and tanker Ruby-T was inbound later in the evening to anchor. Federal Columbia and Algoma Transport were outbound at 21:38 and 22:09 for Detroit and Sault Ste. Marie, respectively. The Columbia had spent the day unloading steel at Federal Marine Terminals 14 West. Drawsko was the last traffic of the day, arriving at 23:16 for Federal Marine Terminals 12 East with steel coils. Lake St. Clair is loading grain at G3, while Shoveler is just south of her discharging fertilizer at Agrico. 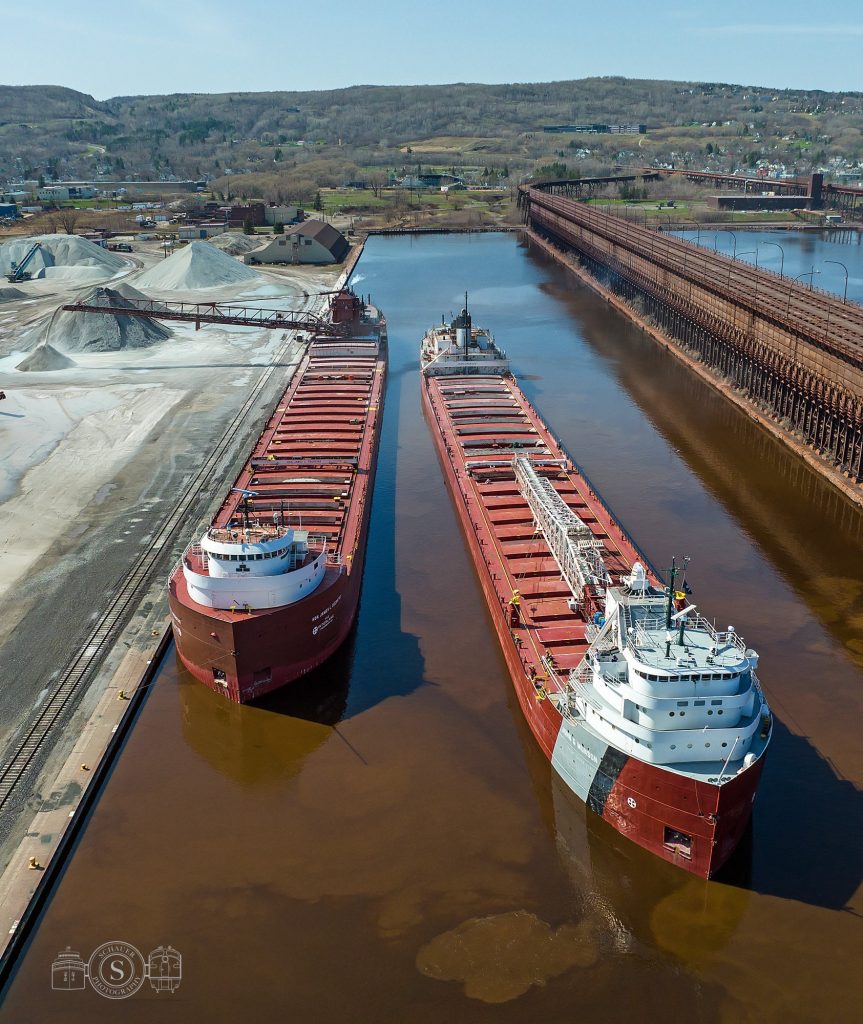 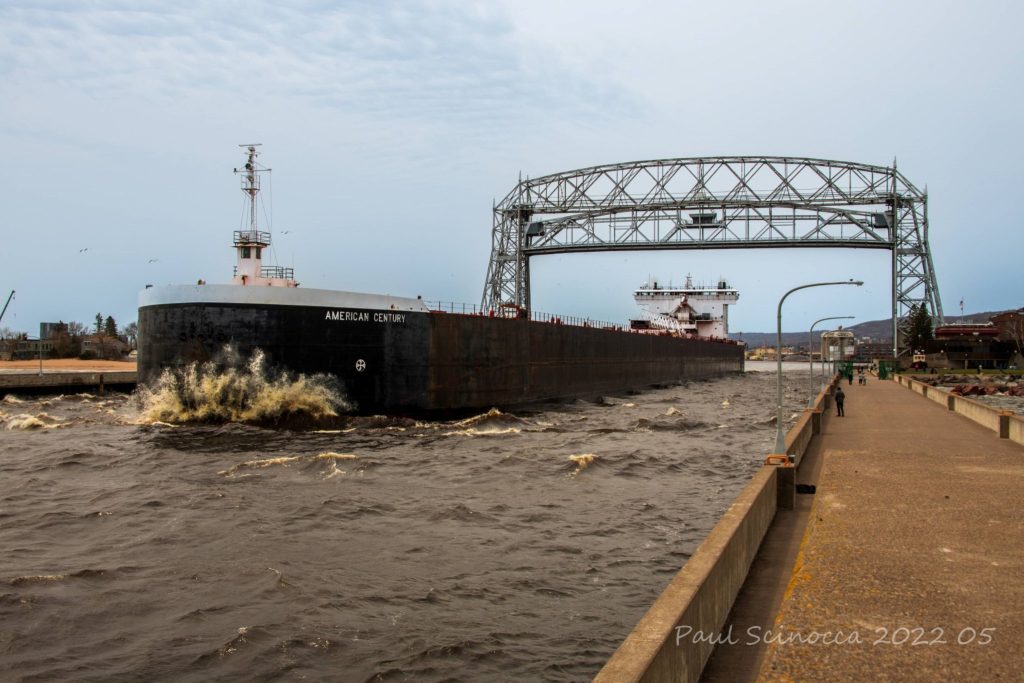 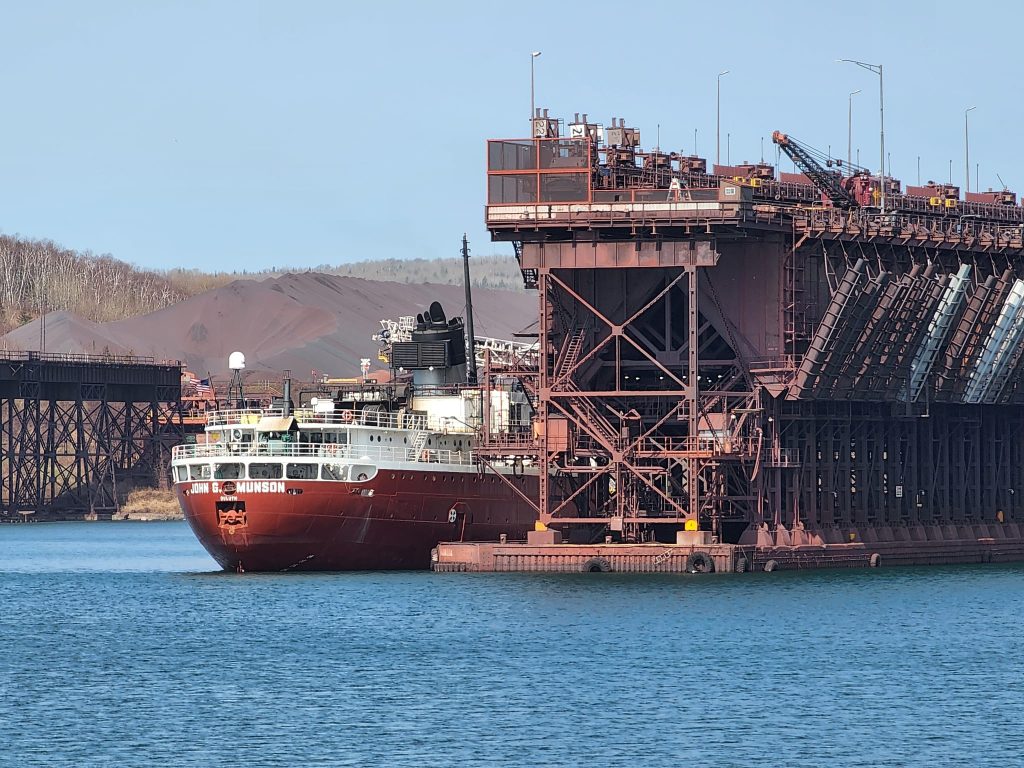 John G. Munson's bow sticks out from behind the dock in Two Harbors as she loads ore. - Justin Rustad 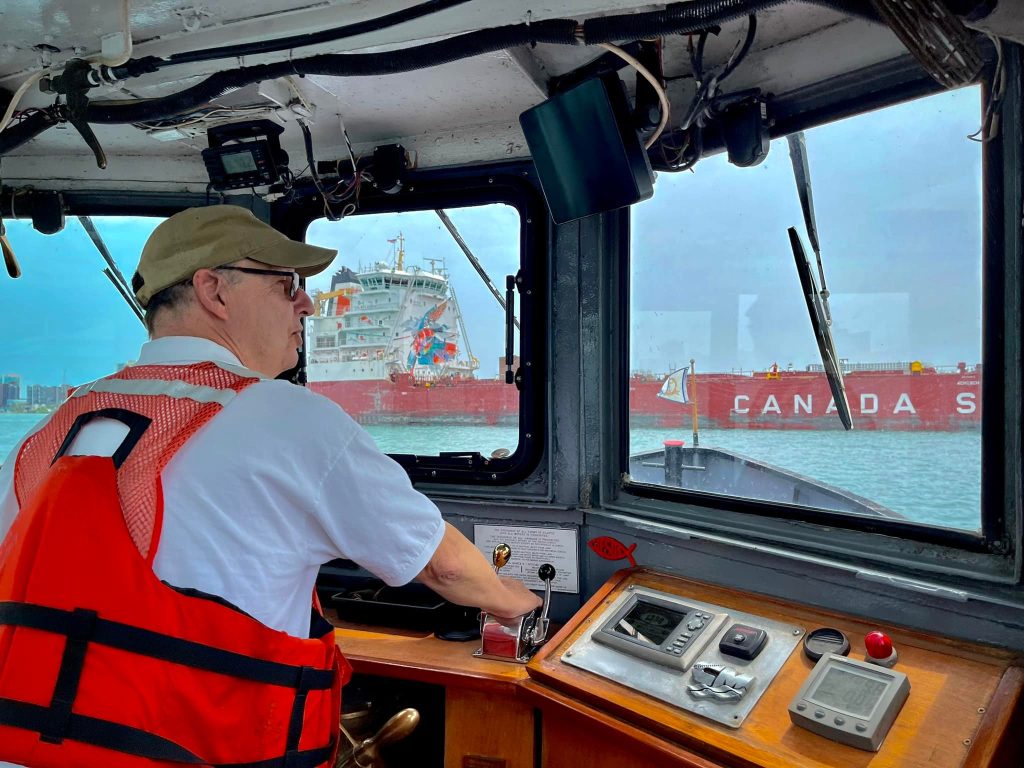 View from the pilothouse as J.W. Westcott pulls up alongside CSL St-Laurent to deliver mail. - Andrew Russell 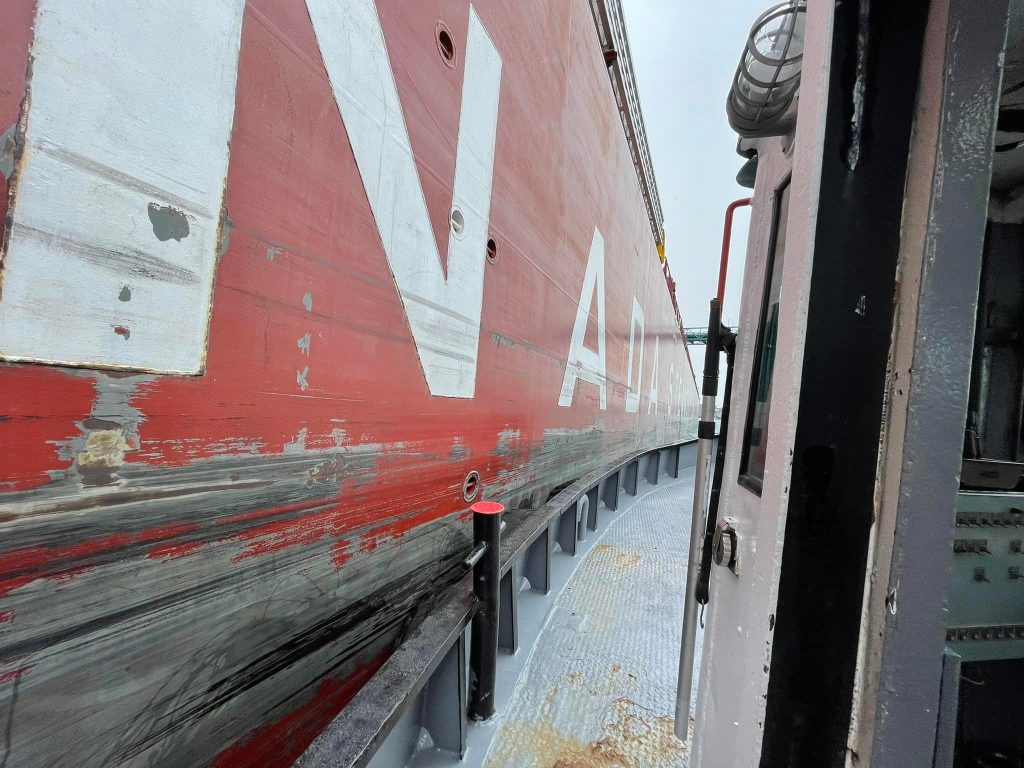 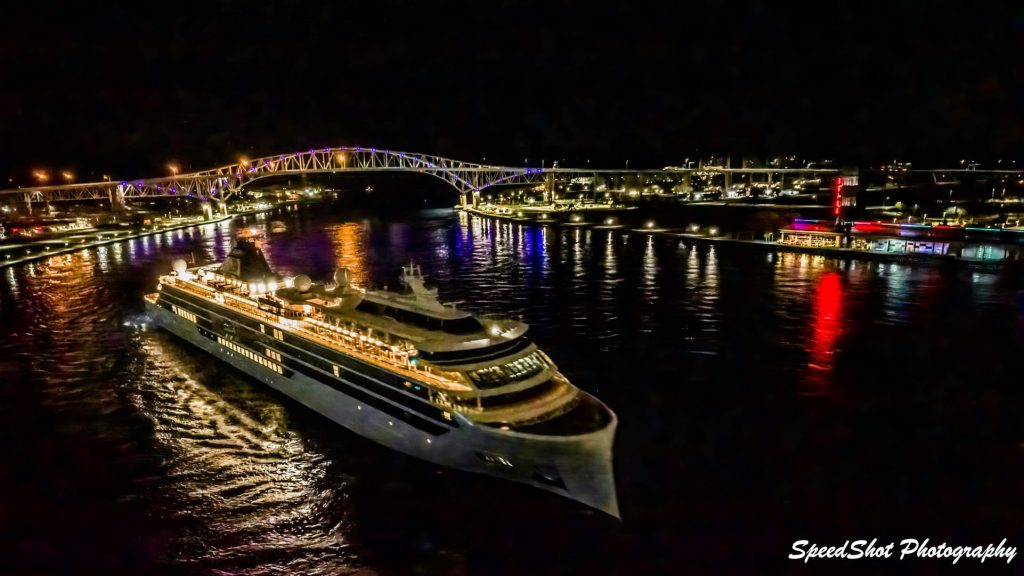 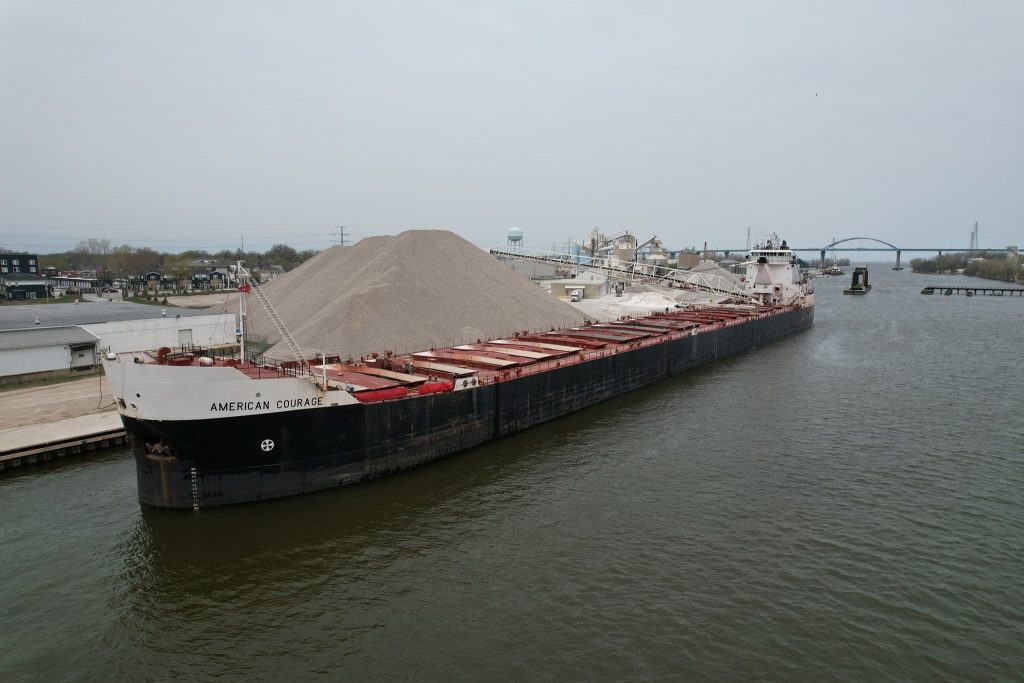 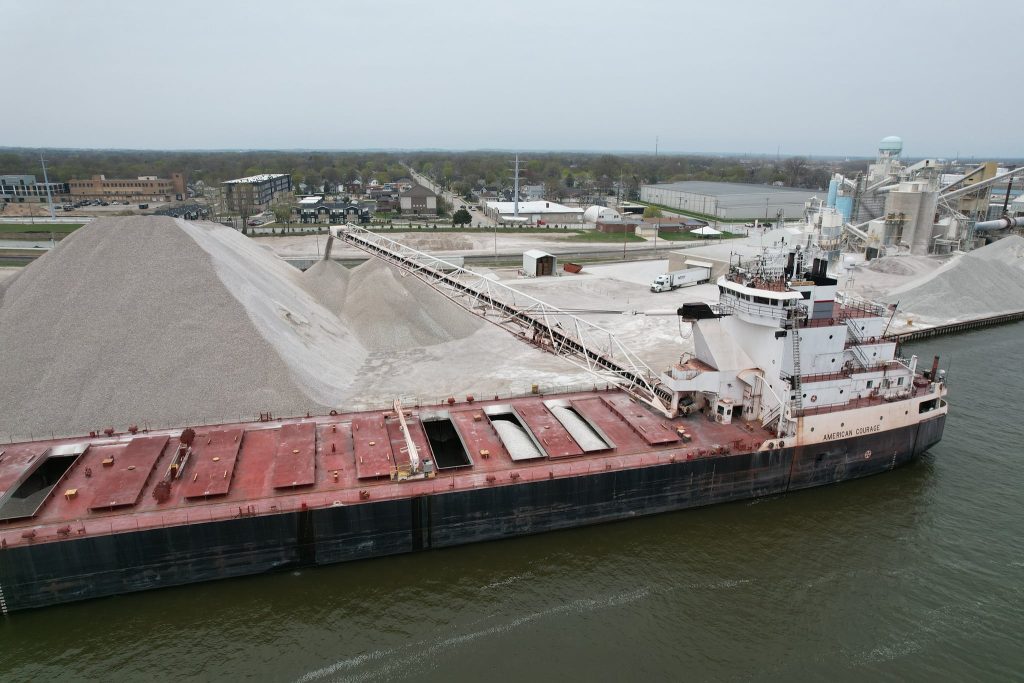 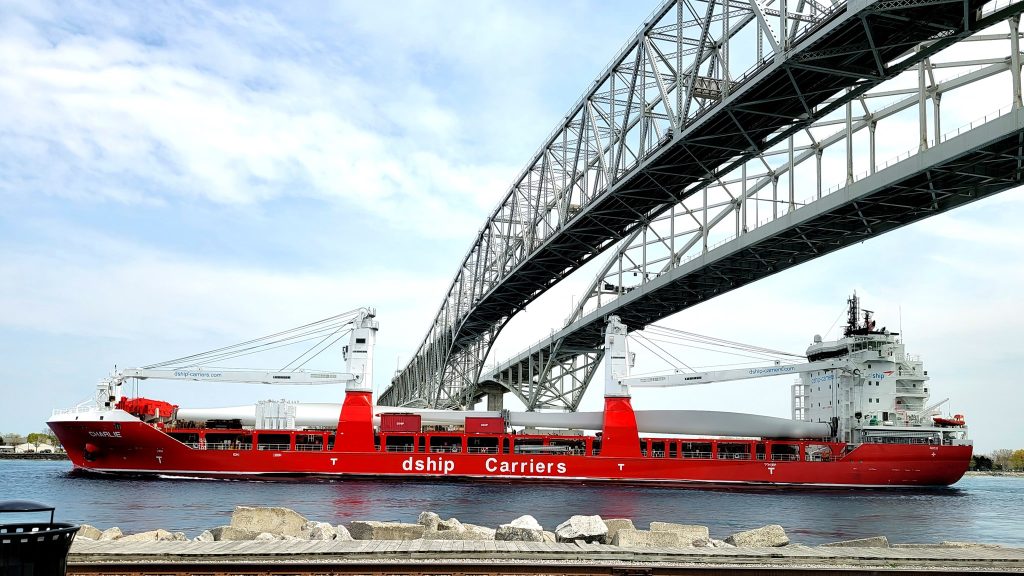 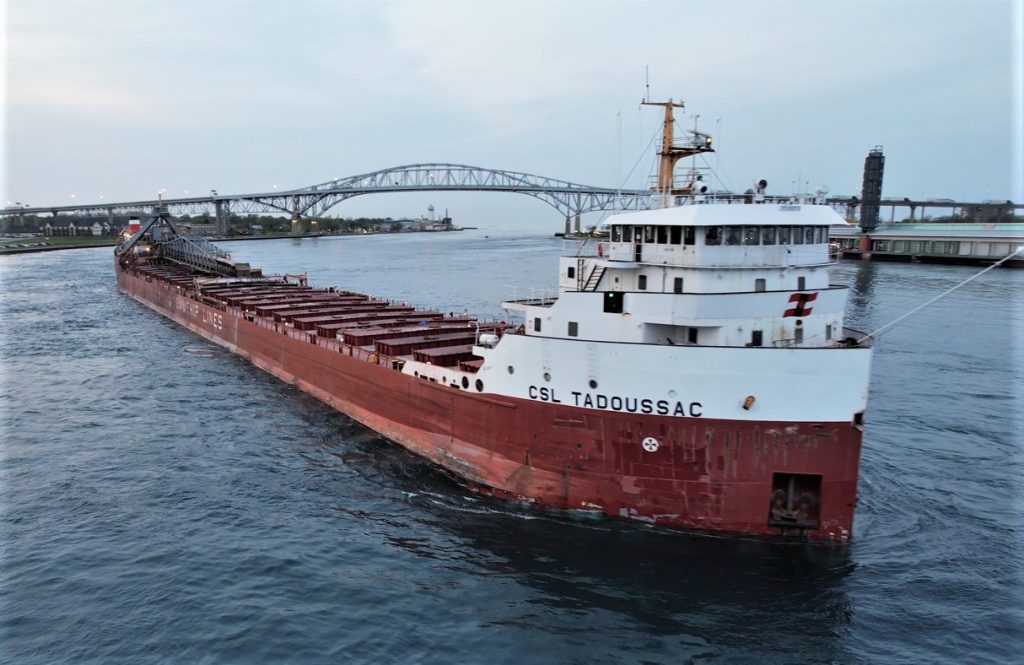 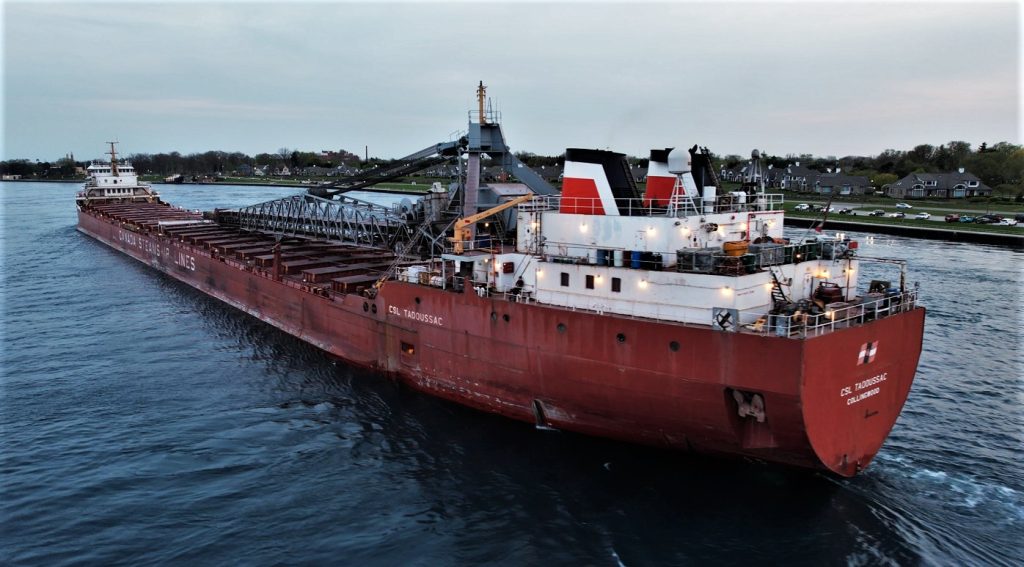 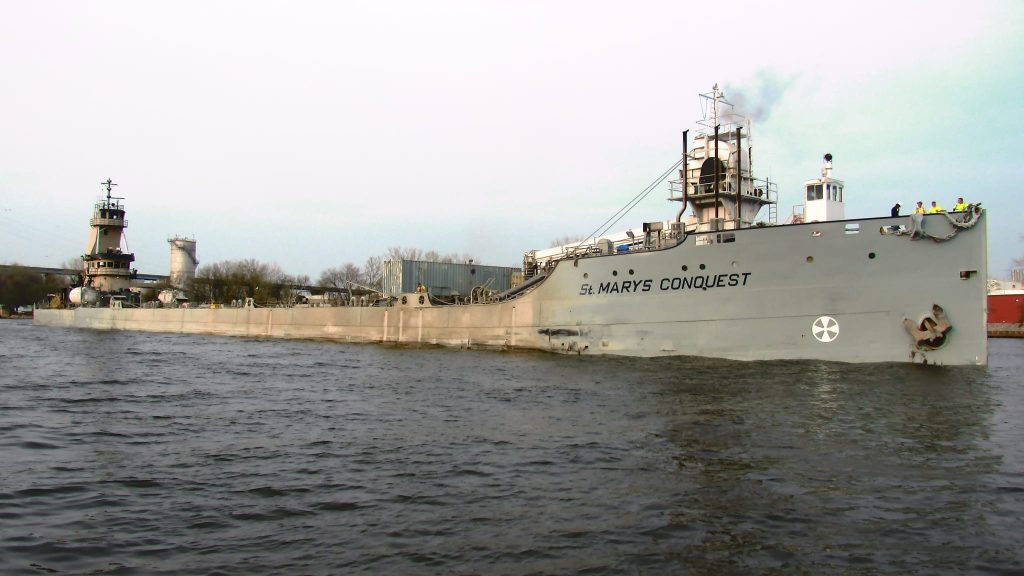 Bradshaw McKee/St. Marys Conquest on their arrive Charlevoix after a month in layup. - Jon Vandyke 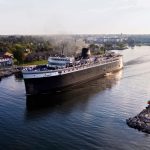 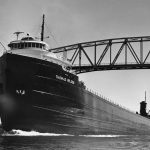