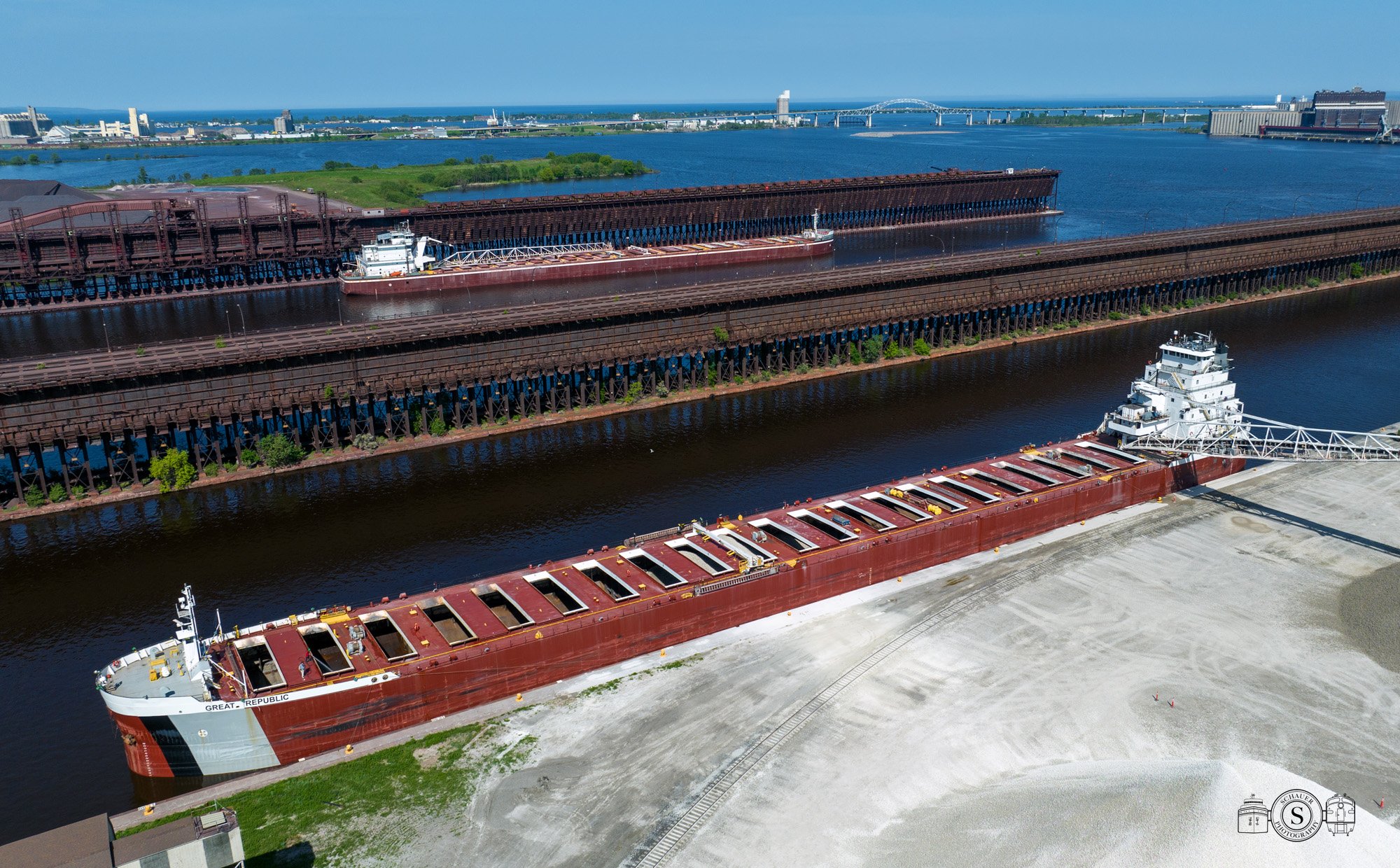 6,400 sacks of quartz were inbound Duluth aboard Spliethoff’s Houtmangracht at 03:12 Sunday morning. With the assistance of the tug Missouri, the saltie tied up at Berth 2 of the Clure Public Marine Terminal to discharge her cargo, loaded in Turkey. Rt. Hon. Paul J. Martin was finishing her load at BNSF Dock 5 around the same time, prompting the anchored Algoma Harvester to proceed inbound the Superior Entry to wait just inside the harbor at 04:00. She promptly took her place at the dock after the Martin left for Quebec City 45 minutes later. Both vessels were scheduled to load 30,000 tons of Hibtac pellets. In the meantime, Arthur M. Anderson departed the Duluth side of the harbor at 04:25 to load taconite at Two Harbors. Former Sarter Marine tug William C. Gaynor, now on charter to Great Lakes Towing, arrived the canal at 07:03 with G-tug Kentucky in tow. The Kentucky has previously been stationed in the Twin Ports and will now be replacing her departing fleetmate Arkansas, headed to Cleveland for inspection. The tug tow docked alongside the rest of the Duluth-based G-tug fleet at the port terminal. Mesabi Miner sailed outbound at 09:22 with 58,000 tons of coal from SMET, on her way to deliver the cargo to DTE power plants in St. Clair and Monroe. Great Republic arrived with limestone from Calcite at 09:38 to unload at CN-Hallett Dock 5; she would later shift to load under the gravity chutes at CN Dock 6 around 19:00. At 14:58, Joseph L. Block made her first visit to the Twin Ports this season when she arrived with a split load of limestone from Port Inland and dolomite from Port Dolomite. She is currently discharging both cargoes at CN Dock 6’s unloading hopper, where it will be sent to the Cleveland-Cliffs Minorca Mine as a flux for pellet production. The Block is expected to shift across the harbor to BNSF upon completion. Algoma Harvester departed for Hamilton at 16:25, allowing Indiana Harbor to take her turn at the dock following a short delay at Enbridge. Next in line to load are Clyde S. VanEnkevort/Erie Trader, who went to anchor off the Superior piers at 16:00. Spartan/Spartan II arrived Duluth at 21:18 with liquid calcium chloride from Ludington. As usual, the pair will be discharging at EnviroTech-Hallett Dock 8. Edgar B. Speer and Presque Isle are still undergoing what is assumed to be mechanical repairs at the port terminal and Fraser Shipyards, respectively.

Milwaukee, WI – MKE Marine Reports
Algoma Intrepid arrived at 19:53 Friday with salt from Compass Minerals, Goderich. After delivering part of her cargo at the Kinder Morgan bagging plant, she moved to the inner harbor Saturday morning and dropped the remainder on a dockside discharge pad. She was still at the dock Sunday morning. Viking Octantis cleared for Mackinac Island at 17:56 Saturday beginning an 8 day cruise to Thunder Bay. Ocean Navigator arrived from Muskegon at 04:59 Sunday and proceeded to the Pier Wisconsin Cruise Dock at Discovery World. This is part of a 16 day roundtrip originating in Chicago. Passengers are bussed between Chicago and Milwaukee. Navigator should depart on a second roundtrip Sunday evening. Of note, OnMilwaukee’s Bobby Tanzilo is currently experiencing life aboard Viking Octantis as she heads to Thunder Bay. Join him at onmilwaukee.com and learn why this new vessel is not your average cruise ship.

Southern Lake Michigan Ports – Joshua Hebeisen
Calumet Harbor, IL: Frequent visitor G.L. Ostrander pushed her cement barge Integrity outbound for the lake at 06:37. After unloading at Holcim, the pair is headed to Milwaukee to do the same.
Gary, IN: John G. Munson arrived at 12:21, spun around just beyond the breakwater, and backed her way in for the U.S. Steel Gary Works. The veteran laker was outbound for Port Inland at 20:43 after unloading her cargo of Minntac pellets.
Burns Harbor, IN: Burns Harbor departed Burns Harbor empty at 10:30, headed back upbound for more ore at Superior. Arriving from Superior after a rare load at BNSF was James R. Barker, who tied up at Cleveland-Cliffs to unload. Federal Leda continues a long stay at Metro Ports.

Detroit, MI – Windsor, ON – Joshua Hebeisen
Outbound the River Rouge around 07:00 was Calumet with salt from Morton. She headed upbound for Lake St. Clair and eventual delivery to Green Bay. An unusually quiet day of traffic wrapped up just hours later when Laura L. VanEnkevort/Joseph H. Thompson departed for Bruce Mines at 09:38. The pair had remained in port overnight with an extended stop at Mistersky. Florence Spirit is at ADM; Ebroborg is at anchor close by.

Lake Erie Ports – Bill Kloss
Toledo, OH: Manitoulin left at 11:12. Defiance/Ashtabula departed for the Soo at 15:25. Dorothy Ann/Pathfinder arrived at CSX at 14:48. In port are Dirk S. VanEnkevort/Michigan Trader, Greenwing and Federal Biscay.
Cleveland, OH: Samuel deChamplain/Innovation arrived at 04:06 to unload at LaFargeHolcim. Once empty, she left for Alpena at 16:01. American Courage left at 18:53.
Fairport Harbor, OH: Herbert C. Jackson arrived at 10:02, unloaded at Osborne and departed for Marblehead at 17:46.
Ashtabula, OH: Algoma Niagara departed with coal for Contrecoeur, QC at 0952. Manitowoc arrived at 13:16. Elbeborg is at the Pinney dock.
Nanticoke, ON: Algoma Hansa arrived at Imperial Oil at 12:59. Algocanada departed for Sarnia at 14:06. Harvest Spirit is at Stelco.

Hamilton, ON – Joshua Hebeisen
G3-owned, Algoma-operated G3 Marquis was outbound Hamilton at 00:22 Sunday morning after unloading at ArcelorMittal Dofasco. Her AIS shows a Two Harbors destination following the transit through the Welland Canal. The saltie Eagle was also headed for Lake Superior after departing FMT 14 West for Thunder Bay around 15:00. Federal Champlain left anchorage to fill the empty berth, tying up across from fleetmate Federal Delta unloading steel at 12 East. It is likely the Champlain will be offloading the same cargo. Other vessels in port include Redhead at anchor, Algoma Sault loading slag at Dofasco Berth 21 after discharging petroleum coke, Kitikmeot W at Agrico with UAN, and Irma loading grain at Richardson. 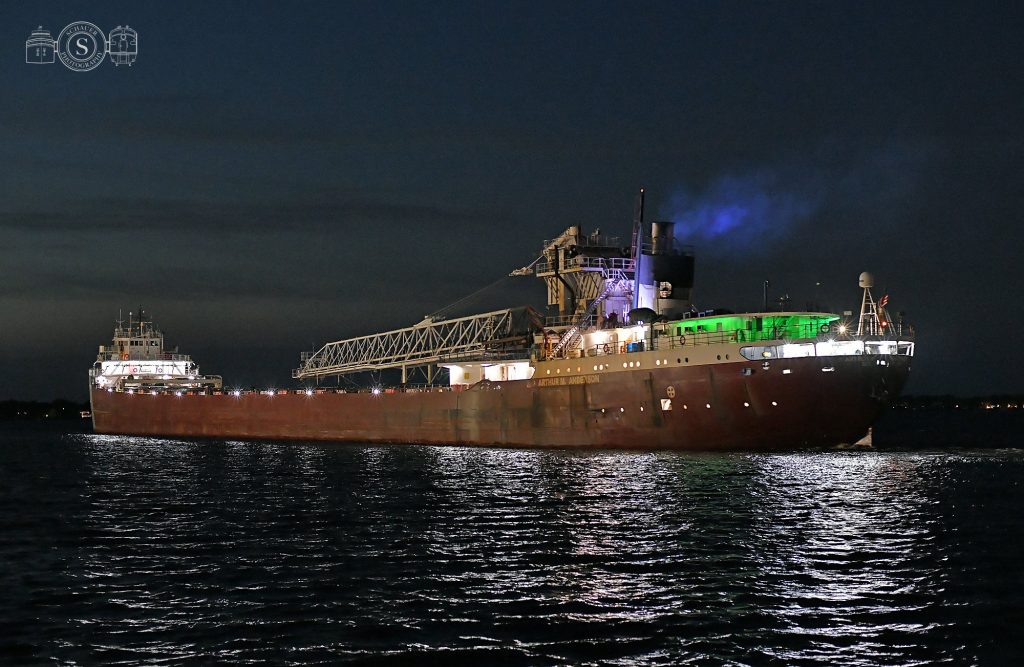 Arthur M. Anderson is still in the holiday spirit as she departs Duluth for Two Harbors. David Schauer, June 19 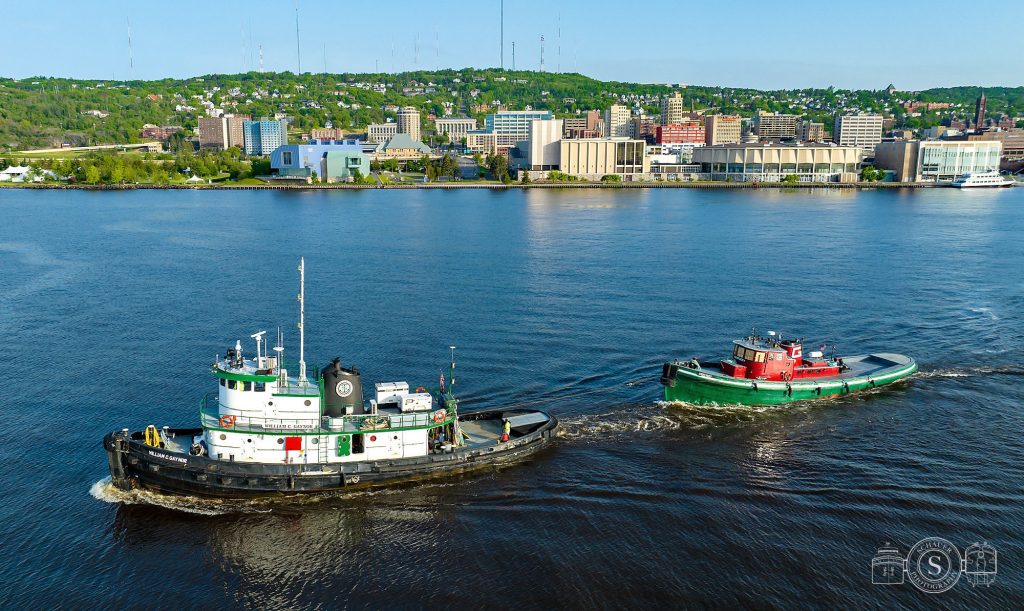 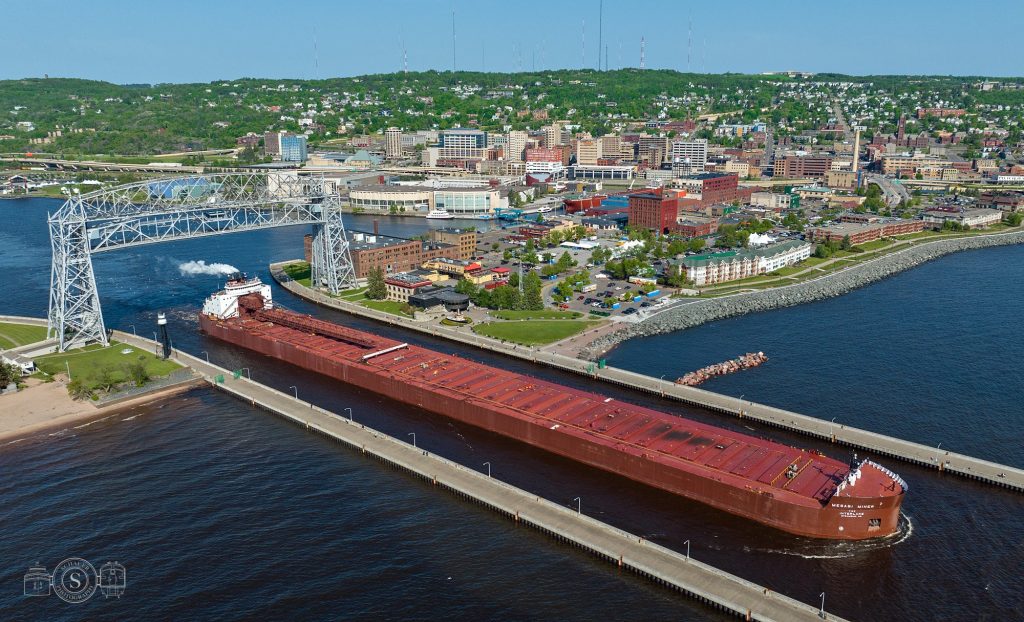 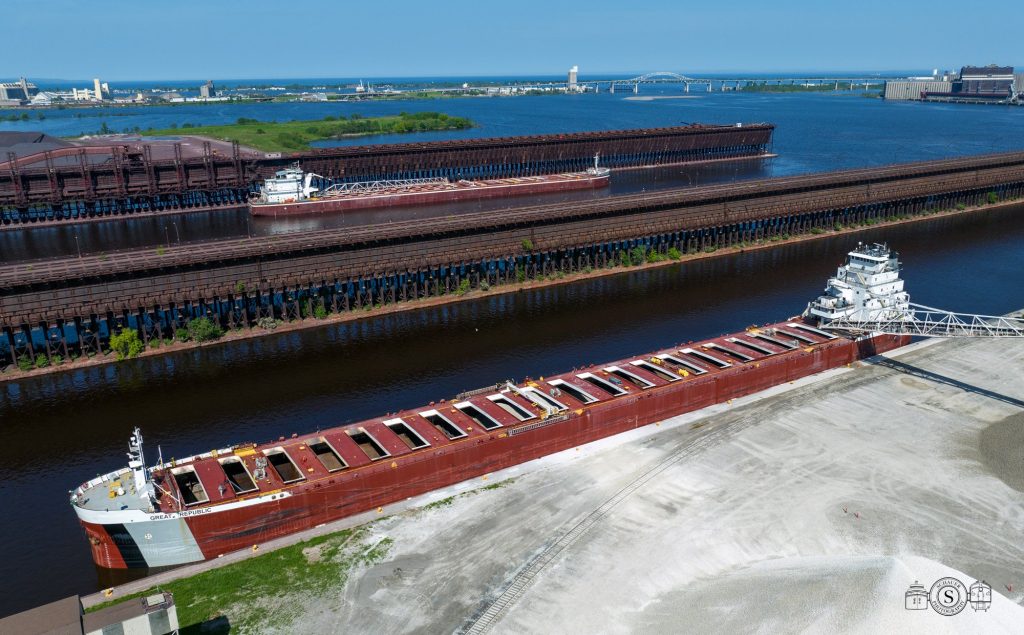 Joseph L. Block backs in at CN Dock 6 with limestone on her first trip to the Twin Ports this season, while Great Republic, also discharging limestone, is at CN-Hallett Dock 5 in the foreground. David Schauer, June 19 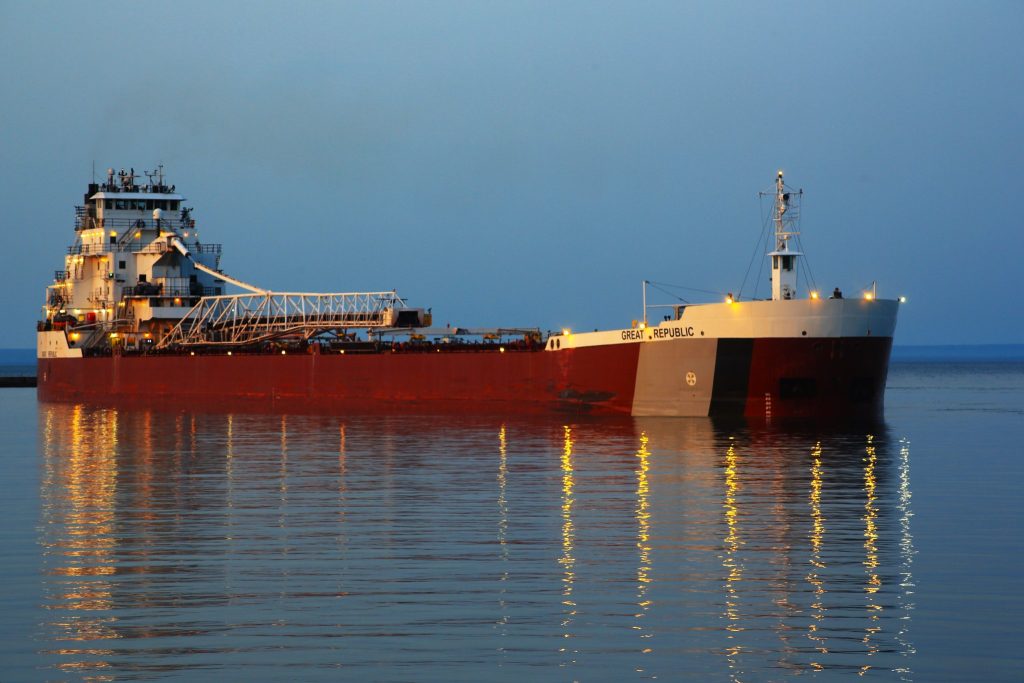 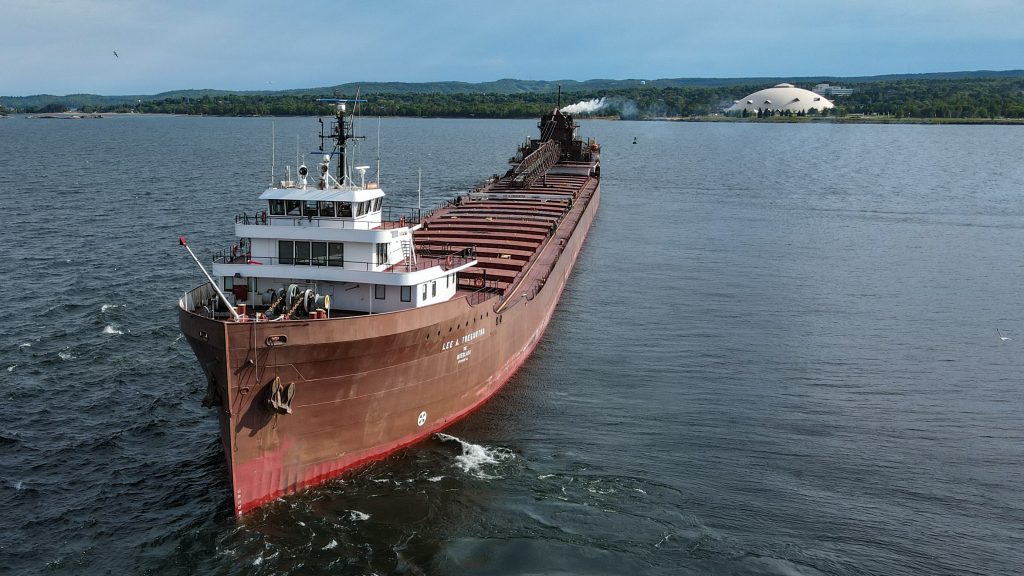 Lee A. Tregurtha backing away from the LS&I ore dock. Chris Mazzella, June 19 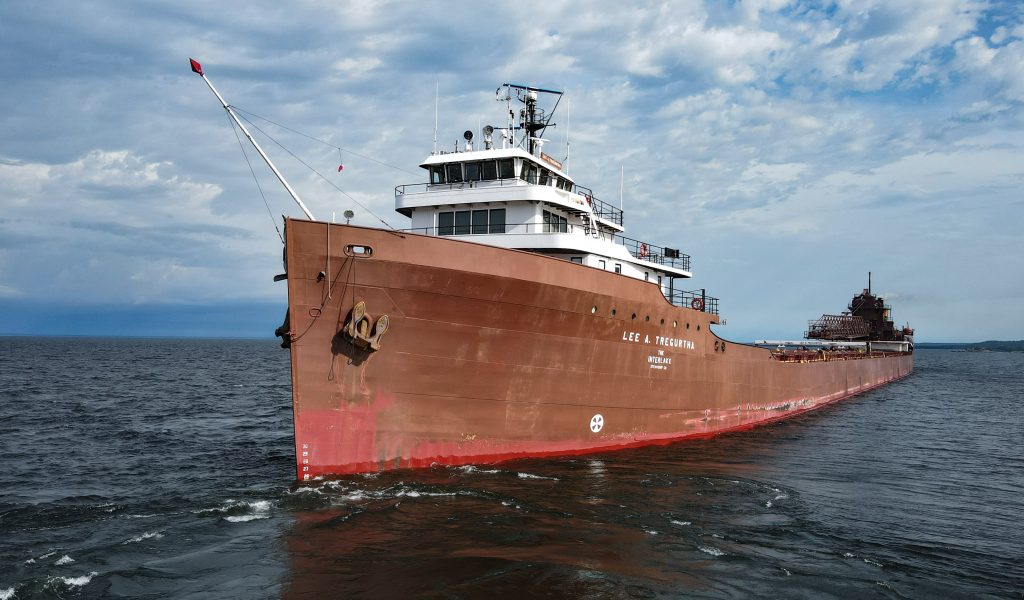 Lee A. Tregurtha turning in the upper harbor at Marquette. Chris Mazzella, June 19 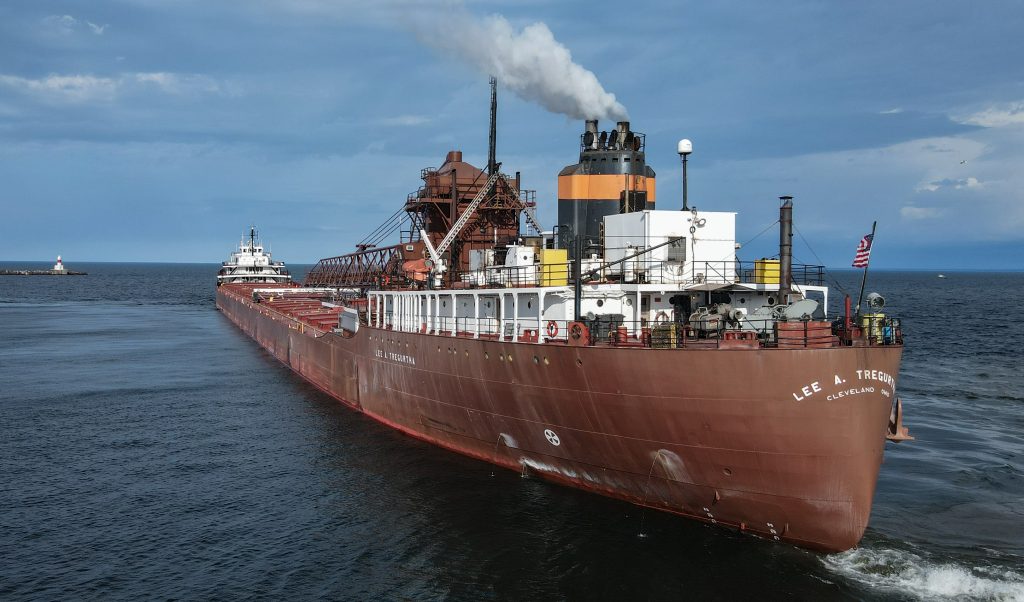 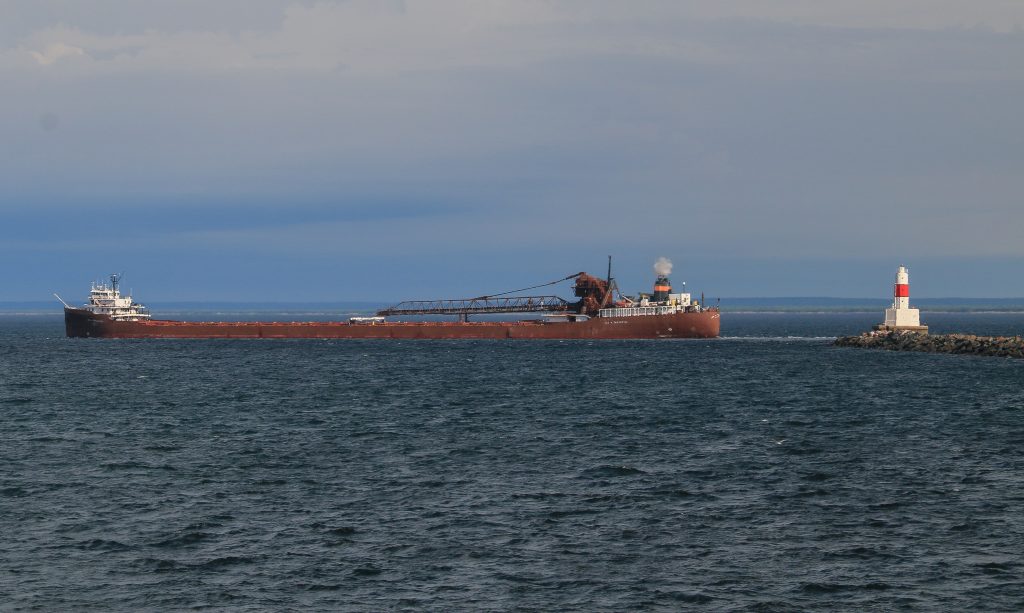 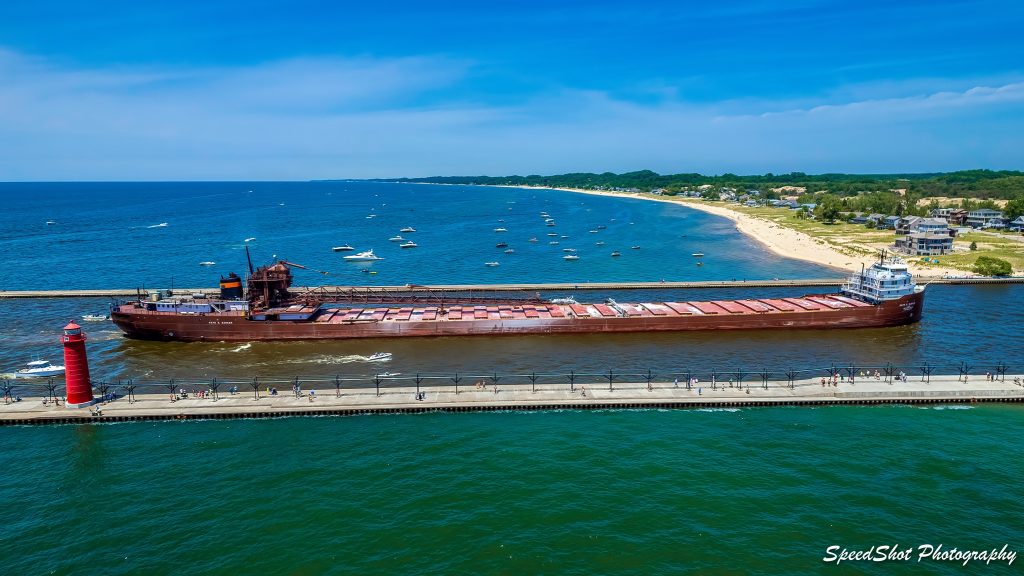 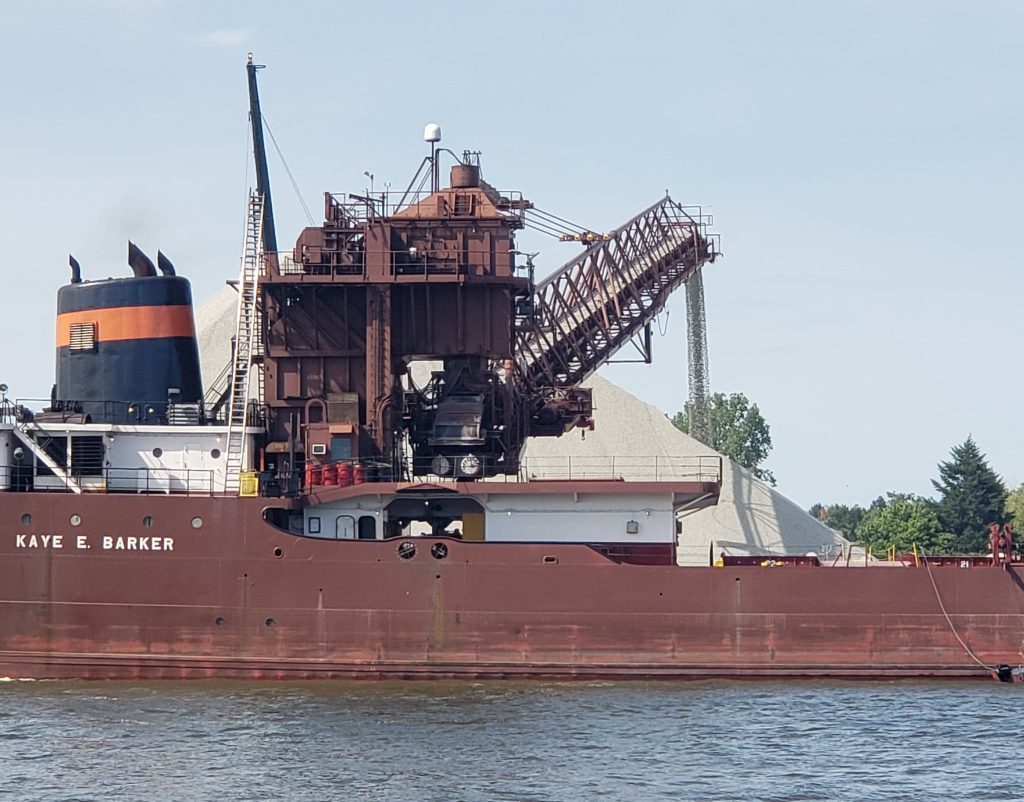 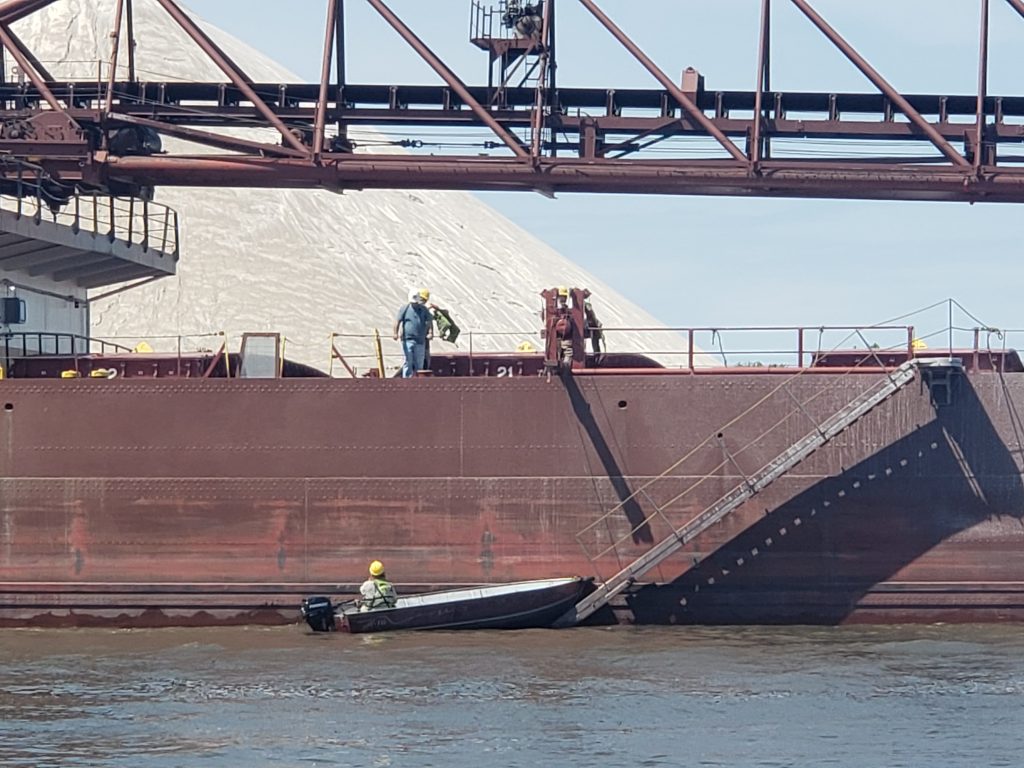 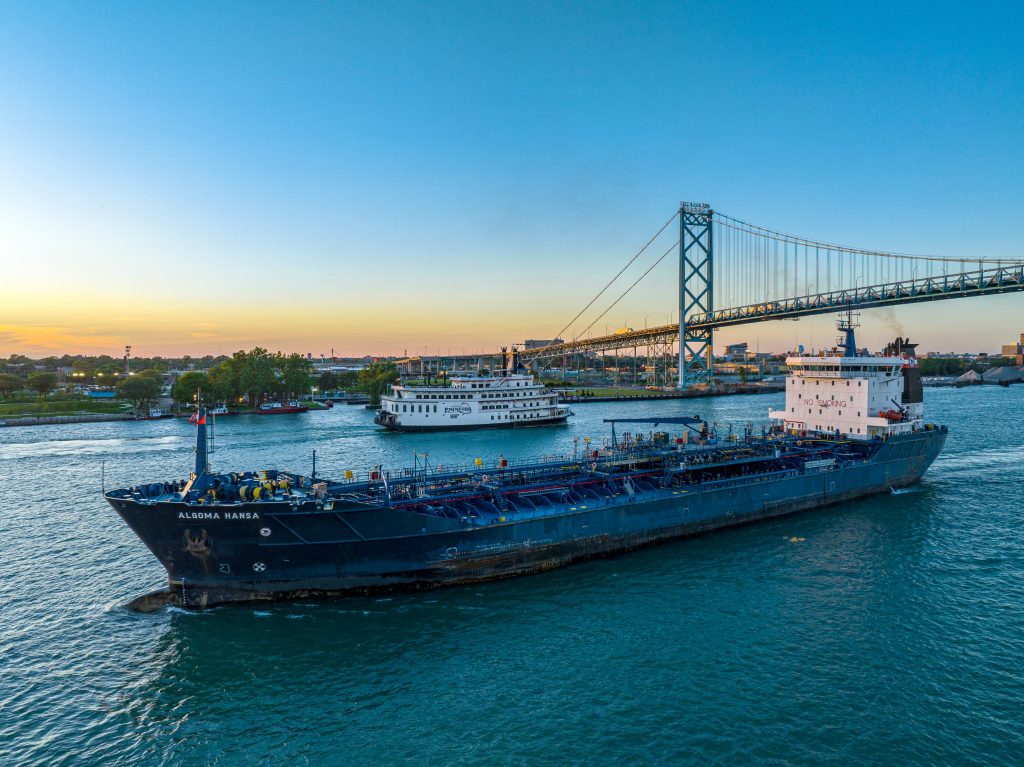 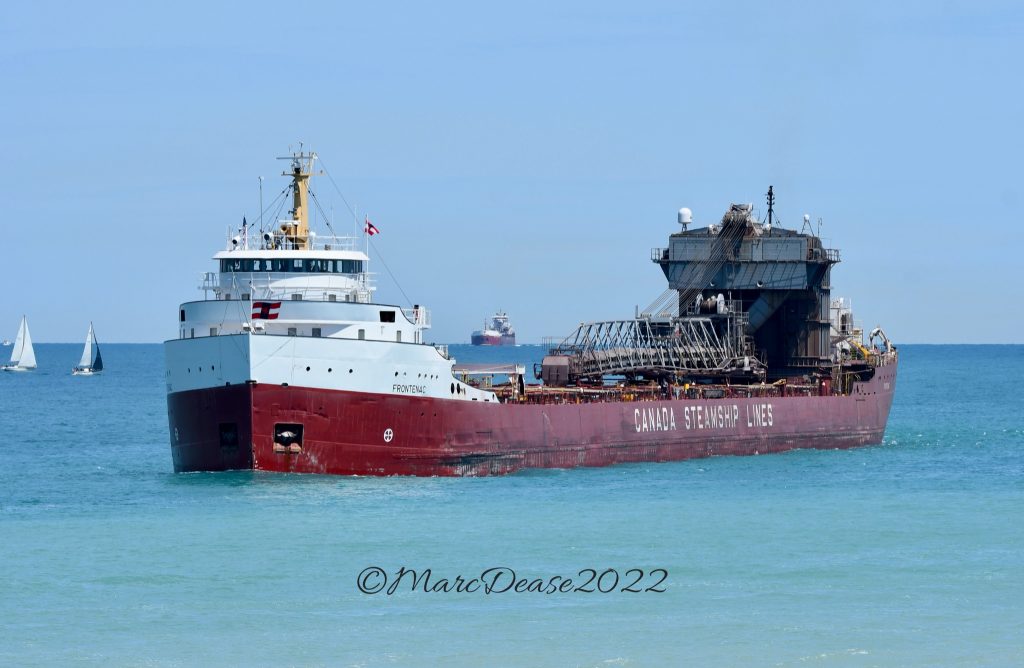 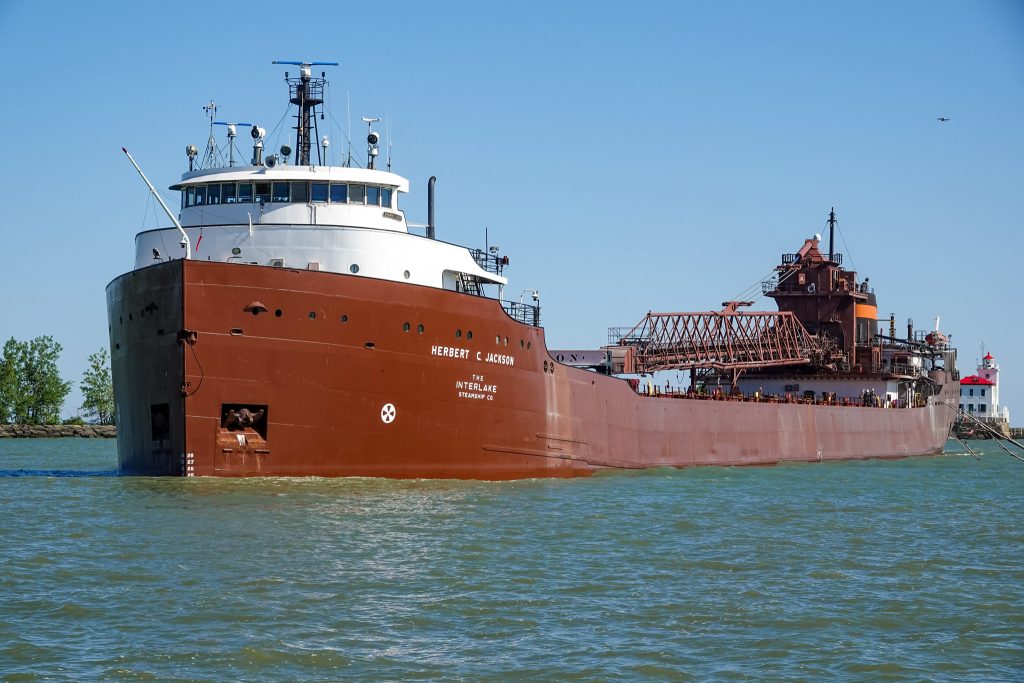 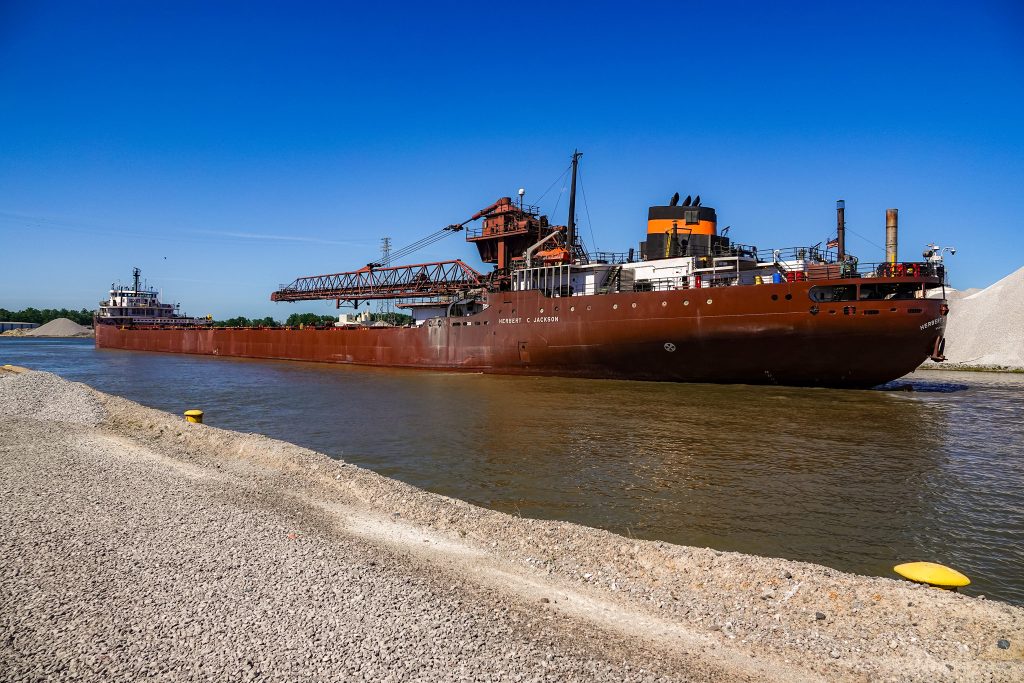 "Herbie" in the harbor at Fairport. Nancy Cline, June 19 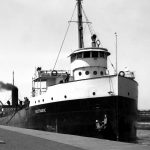 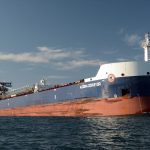