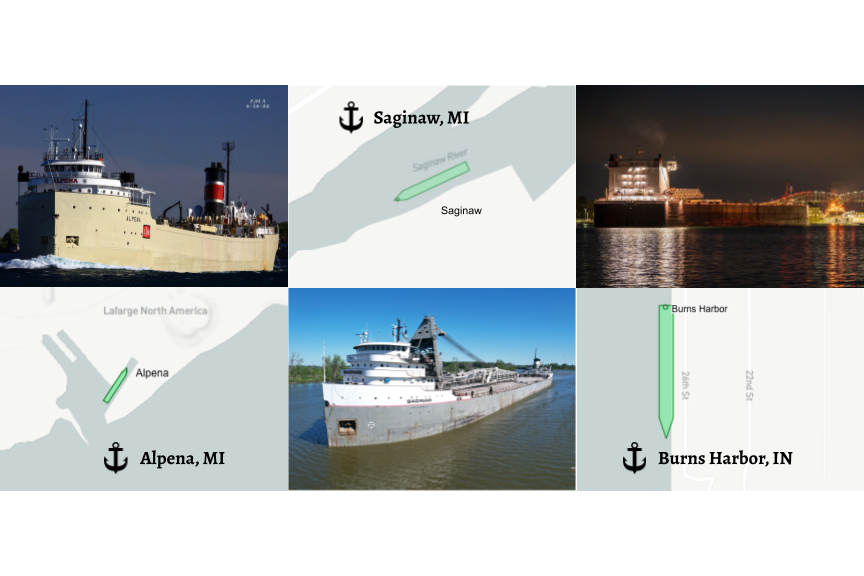 As luck would have it, Saturday, June 18 saw three favorite lakers in their namesake ports at the same time: Alpena loading cement at Alpena, Saginaw discharging stone in Saginaw, and Burns Harbor unloading ore in Burns Harbor. Thanks to Gordy Garris for noticing the unusual event.

Duluth, MN – Superior, WI – Joshua Hebeisen
The Twin Ports saw action on both sides of the harbor early Saturday morning, starting just after 02:00 when the Rt. Hon. Paul J. Martin came off the lake to anchor outside the Superior Entry. In ballast, the Martin was awaiting the departure of American Century from BNSF Dock 5. The Century’s fleetmate Walter J. McCarthy Jr. was making her way up St. Louis Bay at the same time and departed via the Duluth Ship Canal at 02:13. The 1,000-foot vessel is loaded with UTAC pellets destined for the port of Indiana Harbor. The vessel named Indiana Harbor arrived Superior at 09:56 to take a delay at the Enbridge dock. She is scheduled to load ore at BNSF after the Martin, but alas, will not be delivering the cargo to her namesake port. The Martin would eventually proceed inbound the Superior piers at 15:08 following the Century’s departure at 14:34; the latter is carrying 63,000 tons of Hibtac for Burns Harbor. Arriving Duluth at 18:32 with a split load of dolomite from Port Dolomite and limestone from Calcite was Arthur M. Anderson. The AAA-class laker tied up at the northern end of CN-Hallett Dock 5 to unload, after which she is scheduled to take on taconite pellets in Two Harbors. Mesabi Miner wrapped up the day’s traffic when she arrived at 21:52 for coal at SMET. Great Lakes Fleet footers Edgar B. Speer and Presque Isle are at Port Terminal Berth 4 and Fraser Shipyards, respectively, undergoing mechanical repairs. Neither vessel has an expected departure date.

Southern Lake Michigan Ports – Joshua Hebeisen
Calumet Harbor, IL: G.L. Ostrander/Integrity remain at the Holcim South Chicago Cement Terminal after arriving late Friday night.
Burns Harbor, IN: Burns Harbor was inbound at 07:08 on her usual route to the Cleveland-Cliffs dock. As mentioned before, she is part of today’s namesake “trifecta.” Eeborg departed at 18:38 from FMT for Thunder Bay, while Federal Leda is still across the pier at Metro Ports.

Detroit, MI – Windsor, ON – Joshua Hebeisen
Baie Comeau left Sterling Fuels just before 01:00 and shifted farther yet down the Detroit River to load at Windsor Salt’s Ojibway Salt Mine. She would later depart for South Chicago at 20:30. At 03:49, H. Lee White arrived for Mistersky. While the river-class vessel fueled for the journey to Port Inland, Federal Dee departed for Montreal at 06:00, Florence Spirit took the Dee’s place at ADM, and John J. Boland was outbound from Carmeuse at 06:14 en route to Stoneport. The White would eventually follow her fleetmate upbound for Port Inland at 07:24. Tug/barge combos Joyce L. VanEnkevort/Great Lakes Trader and Undaunted/Pere Marquette 41 were midday visitors at Mistersky from 09:04-11:47 and 12:03-14:31, respectively, before leaving the Detroit River for Lake St. Clair. VanEnkevort Tug & Barge’s pair is due next in Meldrum Bay, while Interlake Logistics Solutions’ is headed for Alpena. Calumet arrived at 18:08 to load salt for Green Bay at Morton Salt’s River Rouge facility. She passed the Cleveland-bound Samuel de Champlain/Innovation upon entering port. Laura L. VanEnkevort/Joseph H. Thompson arrived at 19:59 for Misetersky, where they remain as of late Saturday night.

Lake Erie Ports – Bill Kloss
Monroe, MI: Undaunted/Pere Marquette 41 arrived at 00:07, unloaded steel and departed for Alpena at 07:47.
Toledo, OH: Departures were Joyce L. VanEnkevort/Great Lakes Trader and  Wilfred Sykes. Greenwing, Manitoulin and Federal Biscay are still in port.
Marblehead, OH: Dorothy Ann/Pathfinder arrived at 02:00 to load at Holcim.
Sandusky, OH: Calumet arrived at 02:07, unloaded salt at the Gradel dock and left for Detroit at 11:37. Algoma Transport arrived at the coal dock at 11:02, loaded and departed at 19:12. CSL Niagara arrived at 15:03 and went to anchor.
Lorain, OH: Laura L. VanEnkevort/Joseph H. Thompson departed for Amherstburg at 11:48 after unloading stone.
Cleveland, OH: American Courage arrived at 10:12, unloaded stone at RiverDock and went to the Bulk Terminal to begin a series of shuttles  for the Cliffs mill on the Cuyahoga River.
Ashtabula, OH: Elbeborg arrived at the Pinney dock at 07:45. Algoma Niagara continues to load coal.
Nanticoke, ON: Algocanada is at Imperial Oil. Harvest Spirit was a late night arrival to Stelco

Buffalo, NY – Brian Wroblewski
The Capri was all set for departure by 4AM on the 17th and were taken out by the Vermont. After clearing Buffalo, the Capri headed for Bath to load another cargo of cement. The Defiance – Ashtabula came back with more sand for Gateway Metroport on the evening of the 17th around 8PM. They arrived via the South Entrance, winded in the Outer Harbor, and backed up the Lackawanna Canal. The barge was tied up at the North end of the pier and they began unloading while the Algoma Innovator was still docked at the South end of the slip at Compass Minerals. A major problem with the salt unload was causing a long delay. Unprocessed salt had been loaded aboard the ship in Goderich and it had become clumped up inside the holds. Cranes were brought in to lower small excavators down inside to break it up and get it moving again.

Around 1AM on the 18th, the salty Federal Caribou departed the Welland Canal and dropped her hooks in the Port Colborne Anchorage to wait for some room in Lackawanna. They were headed for the Sucros Sourcing plant but had to wait for some of the traffic to clear before coming in. The Defiance – Ashtabula was done unloading sand later that morning, dropped lines, and departed for Toledo around 4AM. Out on the lake off Dunkirk, they met the inbound American Mariner that was headed for the Frontier Elevator. The Mariner arrived here at 10AM and came in without tug assistance. It was windy and she ran into some trouble in the Watson Basin. The stern anchor was dropped to stop her way and the ship’s thrusters got her straightened out for the City Ship Canal. They were tied up and unloading by 11:30AM as the tug Kathy Lynn shuffled by all day with her mud scows to and from the dredge site further up near Canadian Silica.

Hamilton, ON – Joshua Hebeisen
In a departure you could almost taste, the saltie Cinnamon left with a load of wheat from the P&H elevator at 02:54 on the morning of Friday, June 17. She will be taking her load overseas to Ireland, a frequent recipient of Hamilton grain cargoes. At 05:30, John D. Leitch shifted from ArcelorMittal Dofasco to Lafarge to discharge slag. Federal Champlain was inbound at 09:43 to anchor, Irma arrived minutes behind her to load grain at Richardson, and CSL Niagara departed at 10:03 after unloading petroleum coke at Stelco. She is expected to make her next port of call in Sandusky.

On a busy Saturday, June 18, Federal Shimanto departed empty for Thunder Bay at 01:46. The Fednav bulker had spent several days unloading steel at FMT 12 East. Departing at 06:07 from ArcelorMittal Berth 21 was Harvest Spirit, bound for Nanticoke after delivering coke. Anchored saltie Eagle was able to proceed to FMT 14 West after Federal Delta shifted from 14 West to 12 East. Both vessels are unloading steel. Redhead departed 12 North around 10:00 after unloading the same cargo, proceeding to the inner anchorage in preparation for taking on an export load. John D. Leitch left port for Bath at 16:40 before Algoma Sault arrived to load coke at ArcelorMittal less than an hour later. Tanker Kitikmeot W, laden with UAN, was inbound at 19:31 to discharge her cargo at Agrico. 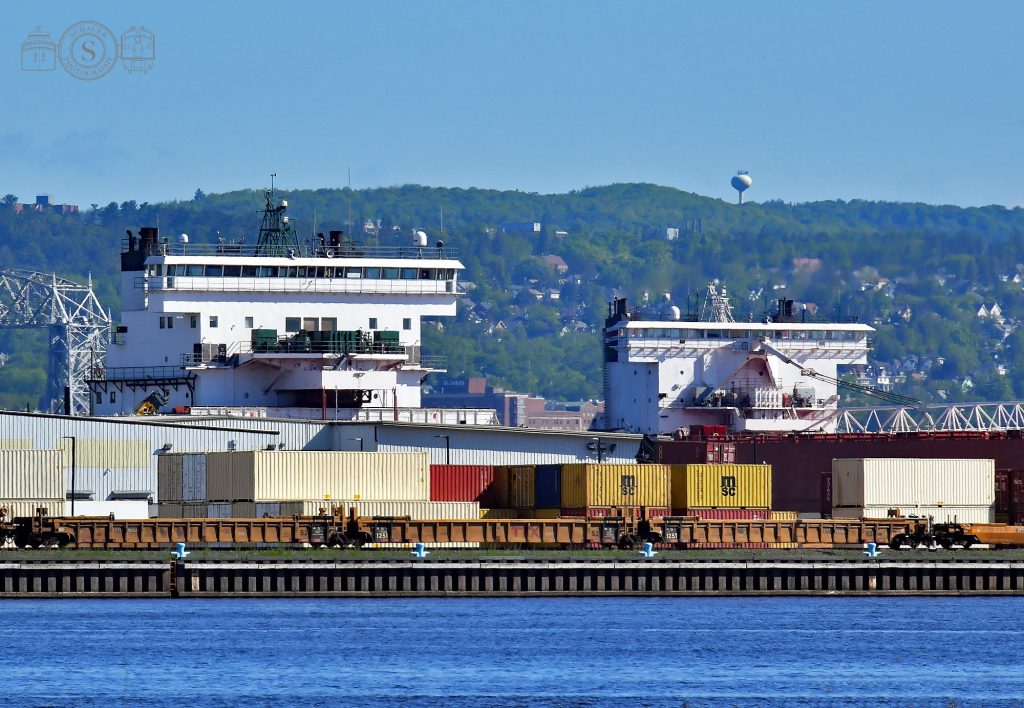 The superstructures of footers Edgar B. Speer and Walter J. McCarthy Jr. rise above the harbor. David Schauer, June 17 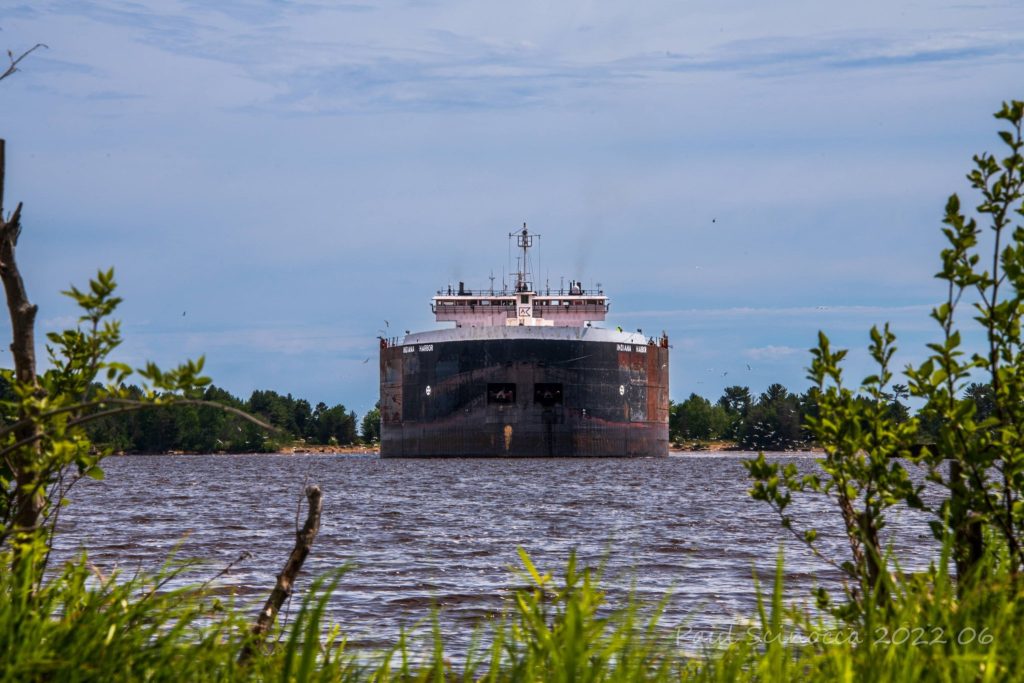 Indiana Harbor prepares to pull in for a delay at the Enbridge dock. Paul Scinocca, June 18 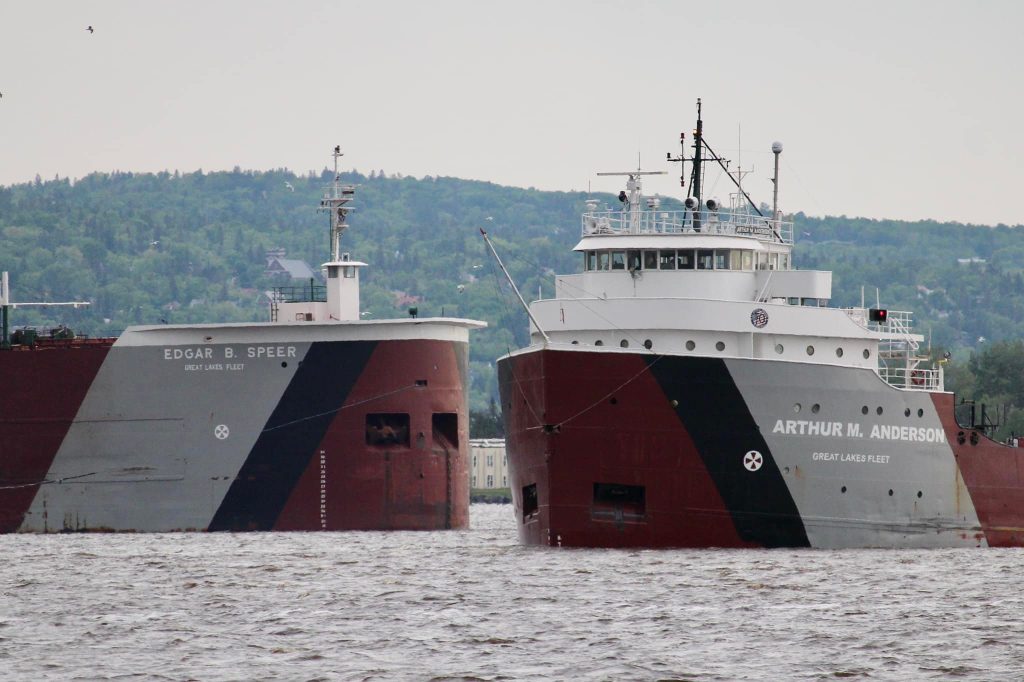 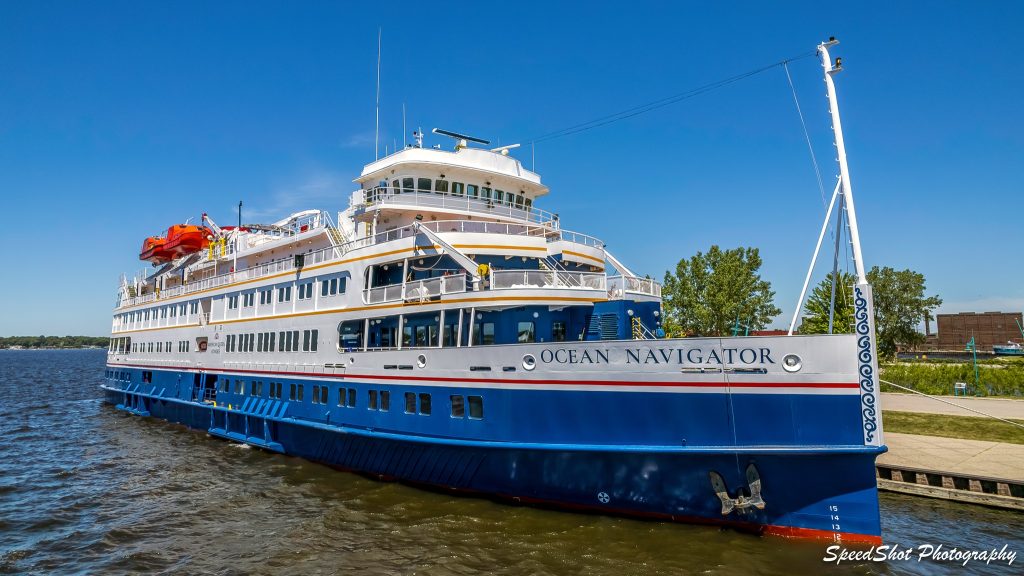 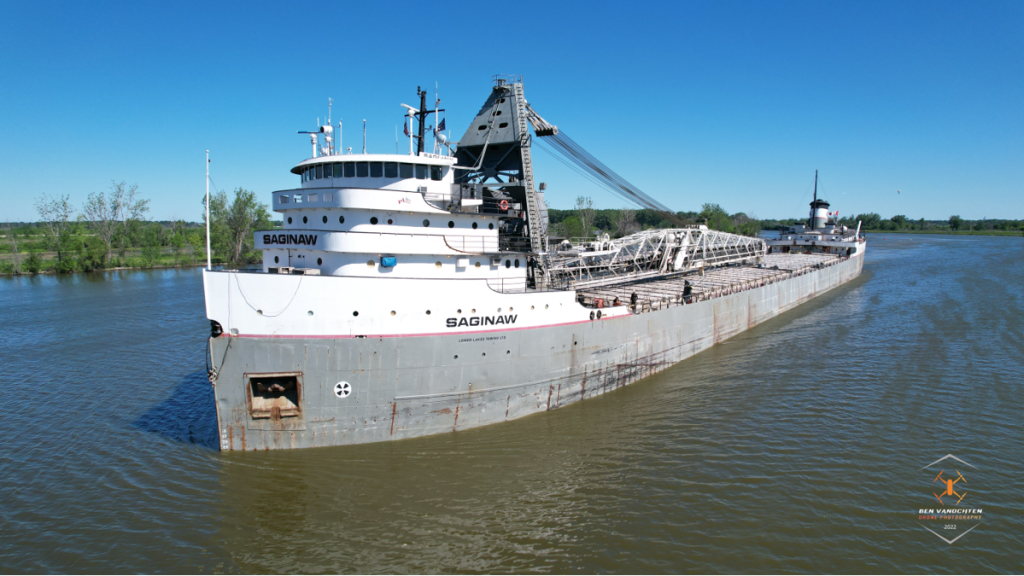 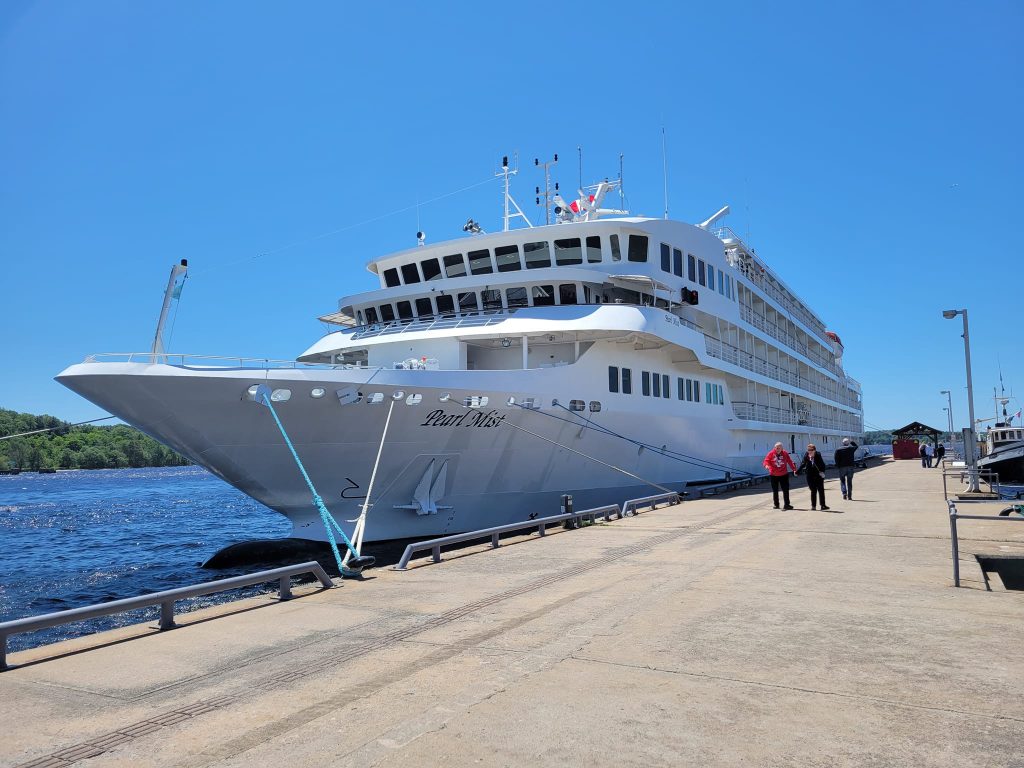 Well-traveled Cuyahoga enters Lake Huron on a windy day as the American and Canadian flags blow behind her. Fred Miller II, June 18 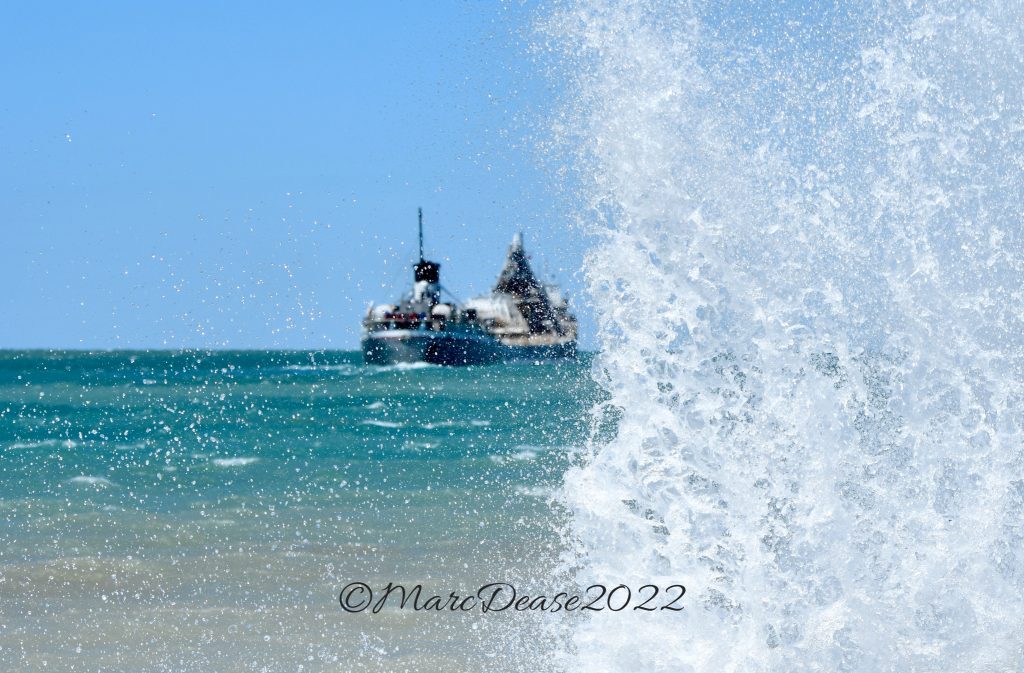 A strong north wind made for a lot of wave action in lower Lake Huron as the Cuyahoga heads into the teeth of the blow. Marc Dease, June 18 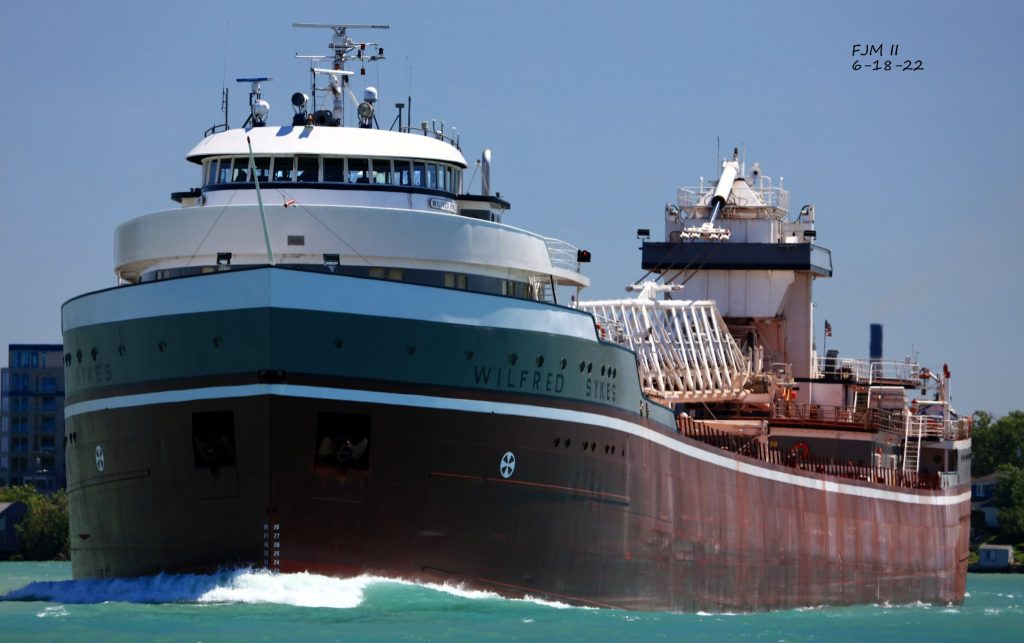 Wilfred Sykes heads upbound after a rare trip to Port Huron and the waterways below. Fred Miller II, June 18 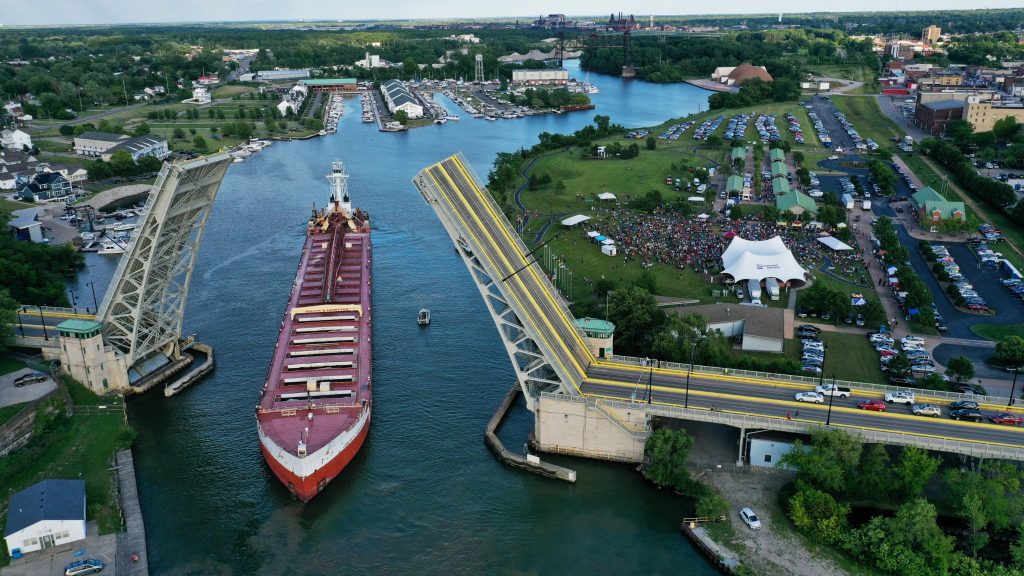 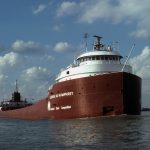 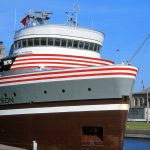