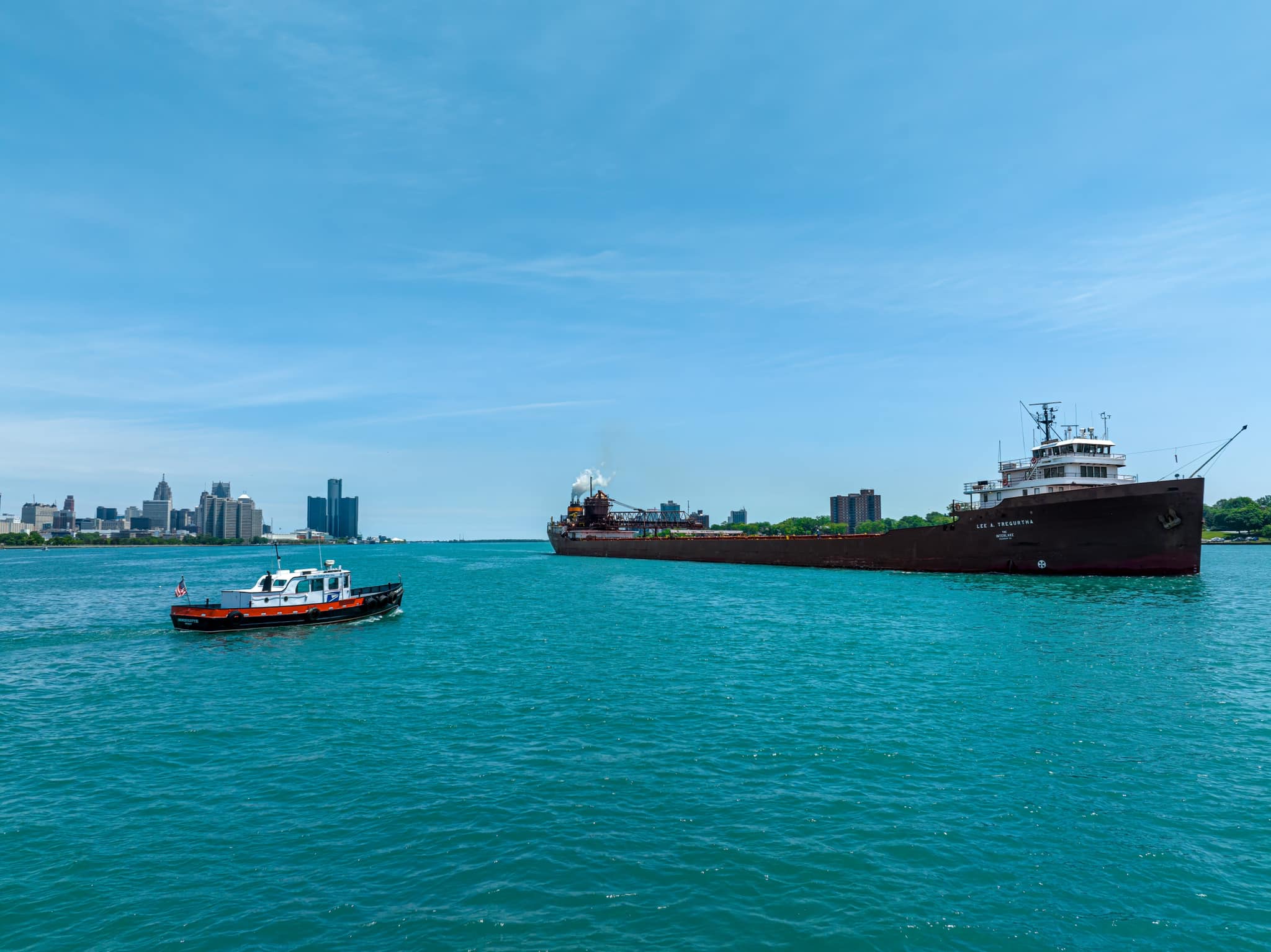 The week got off to an early start in Duluth, with two vessels departing empty early Monday morning after delivering stone. The first, American Mariner, led the way out the Duluth Ship Canal at 02:23 headed for Thunder Bay. She will likely be loading grain on this unusual trip for an American laker. Hon. James L. Oberstar was outbound later at 05:47 on her way to Marquette and another load of ore. The last traffic of the day was CSL Tadoussac’s departure from Superior at 11:33. The veteran Canadian laker loaded 29,000 tons of Keetac pellets at BNSF Dock 5 and will be delivering the cargo to Stelco’s Lake Erie Works in the next several days. Miena Desgagnés remains at the Duluth Port Terminal discharging wind turbine parts.

Two Harbors, MN – Silver Bay, MN – Gary Putney
Whitefish Bay departed Two Harbors on 06/12 at 23:30 for Quebec City. Edwin H. Gott arrived Two Harbors on 06/13 at 01:08 and departed on 06/13 at 15:31 for Nanticoke. The Radcliffe R. Latimer was looking like she was going to arrive Two Harbors after the Gott departed, but the Nels J. went back to her dock and then she didn’t arrive until 18:38 with help from Heritage Marine’s Nels J. She is loading for Quebec City. Due Cliffs North Shore Mining in Silver Bay either late on 06/13 or early on 06/14 is the Burns Harbor.

Southern Lake Michigan Ports – Joshua Hebeisen
Calumet Harbor, IL: After a visit from the steamer Alpena on Sunday, Lafarge received another load of cement to start the week from tug/barge Samuel de Champlain/Innovation. In the spirit of her French namesake, the Champlain carefully navigated the length of the Calumet River upon arriving at 06:20 in search of the dock. General cargo vessel Flevoborg remains at Iroquois, though her AIS destination has been set for Toledo. G-tug Illinois appears to be headed her way as of 23:00 local time.
Indiana Harbor, IN: Late Sunday night, American Integrity departed port at 22:54 for Two Harbors after an extended stay at Dock 7H. Walter J. McCarthy Jr., swinging on the hook in the South Chicago anchorage, weighed anchor and proceeded inbound for the now-empty dock at 23:25. Fan-favorite steamer Wilfred Sykes arrived for a berth just south of 7H around 21:00 and will likely be discharging stone she took on at Port Inland.
Buffington, IN: Laura L. VanEnkevort/Joseph H. Thompson arrived with limestone from Calcite at 15:21.
Gary, IN: 1,004-foot Edgar B. Speer departed empty for Duluth at 22:49, where she may finally receive repairs on her idle engine.
Burns Harbor, IN: Federal Leda continued her stay at Metro Ports.

Goderich, ON – Bruce Douglas
Algoma Sault cleared 12.54 Sunday downbound for Prescott ON with salt. Algoma Innovator expected next for salt.

Detroit, MI – Windsor, ON – Joshua Hebeisen
Cruise ship season continued in Detroit with the arrival of the downbound Ocean Explorer at 06:43. She tied up at the Port Authority’s Public Dock and Terminal and will likely be leaving the river before midnight on Monday night, though had yet to do so as of 22:30 local time. Kaye E. Barker departed Dearborn for Meldrum Bay at 10:19, while her Interlake fleetmate Lee A. Tregurtha arrived to unload at the same dock about three hours later. Fresh out of layup, this is the first of what should be many River Rouge transits for the Tregurtha this season. American Courage arrived later in the day at 18:59 for Mistersky; after fueling, she continued downbound for Cleveland. Everlast/Norman McLeod are still at Marathon, Harvest Spirit is at ADM, and Ebroborg is anchored behind her on the Detroit River.

Hamilton, ON – Joshua Hebeisen
As of 22:30 local time, a pair of Algoma Central departures within the first ten minutes of the day were the only traffic Hamilton received on Monday, June 13. Algoma Conveyor was outbound at 00:01 for Superior, with Algoma Equinox right behind her for Thunder Bay at 00:06. In a correction to yesterday’s report, the Conveyor was not at P&H to load grain; rather, she was carrying an import cargo to discharge at the dock. The Equinox had originally arrived in port to discharge ore at ArcelorMittal Dofasco and shifted to QSL on Sunday for brief repairs. Both vessels left port empty. Federal Yukina and Algoma Harvester are at ArcelorMittal unloading petroleum coke and ore, respectively; Redhead is unloading steel at FMT; and Wicky Spirit is loading grain at G3 Canada. The past several days’ reports have listed the latter at lay-up at QSL, but it turns out she shifted just down the dock to G3 on June 11. 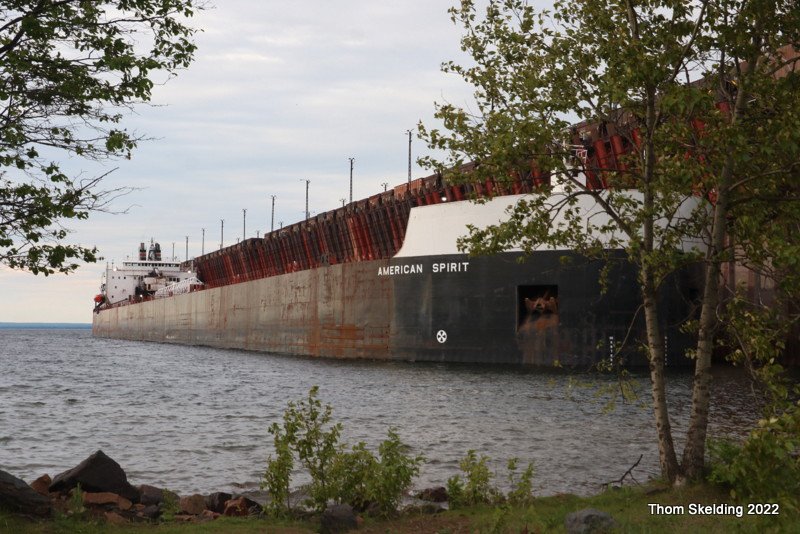 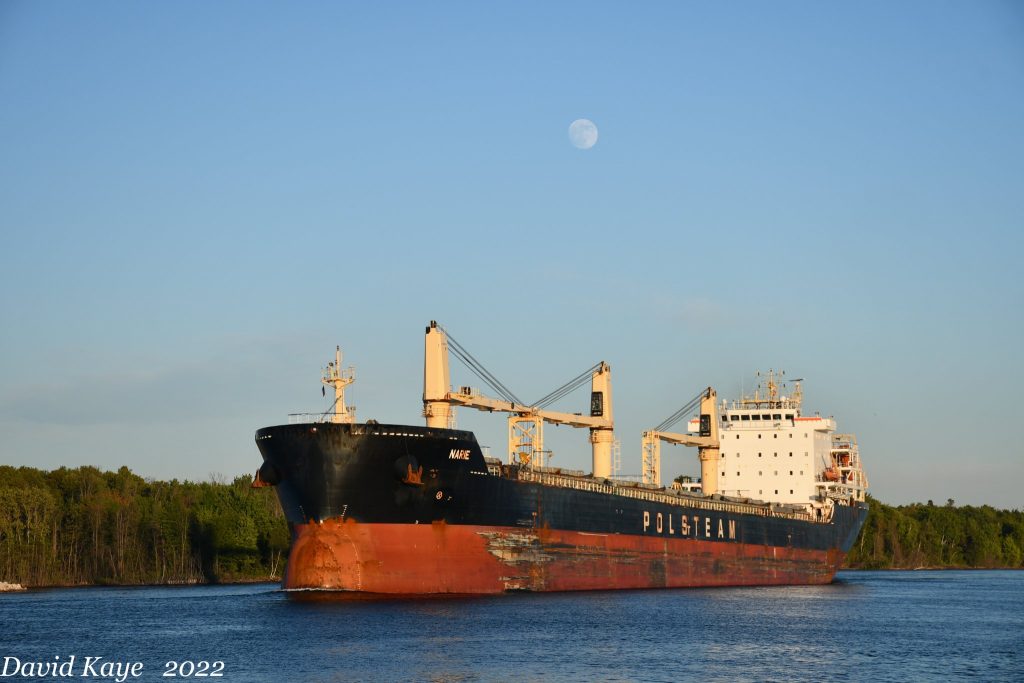 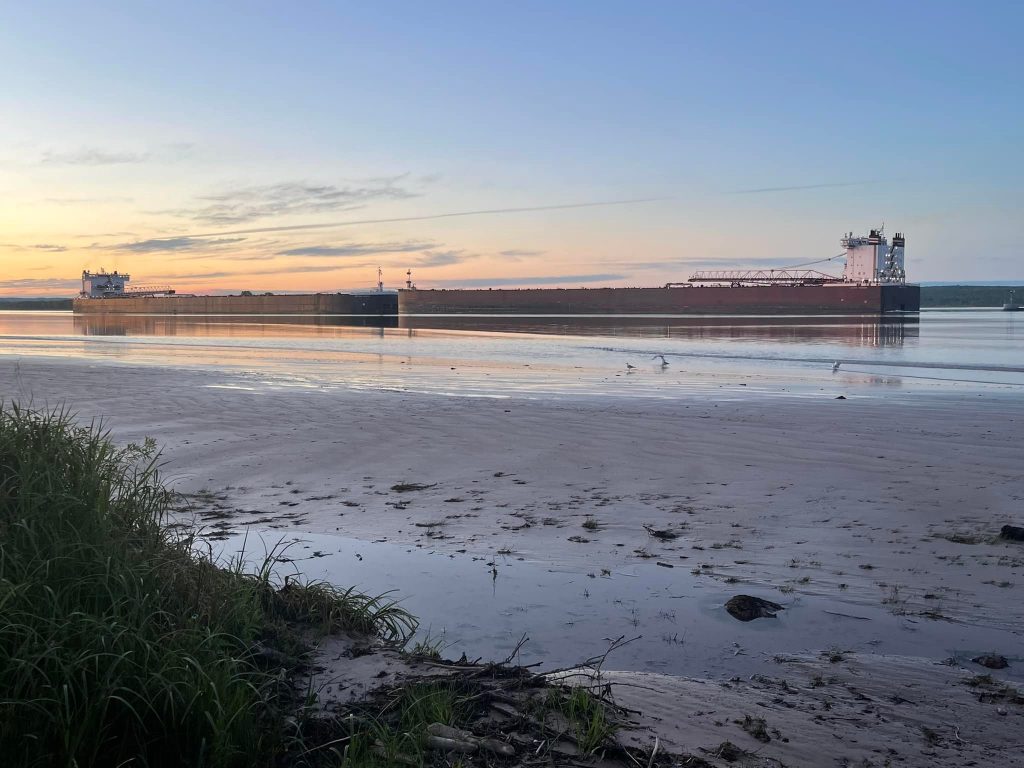 Fleetmates American Century and Burns Harbor with a quick "kiss" at the Soo. Jill Crosson, June 12 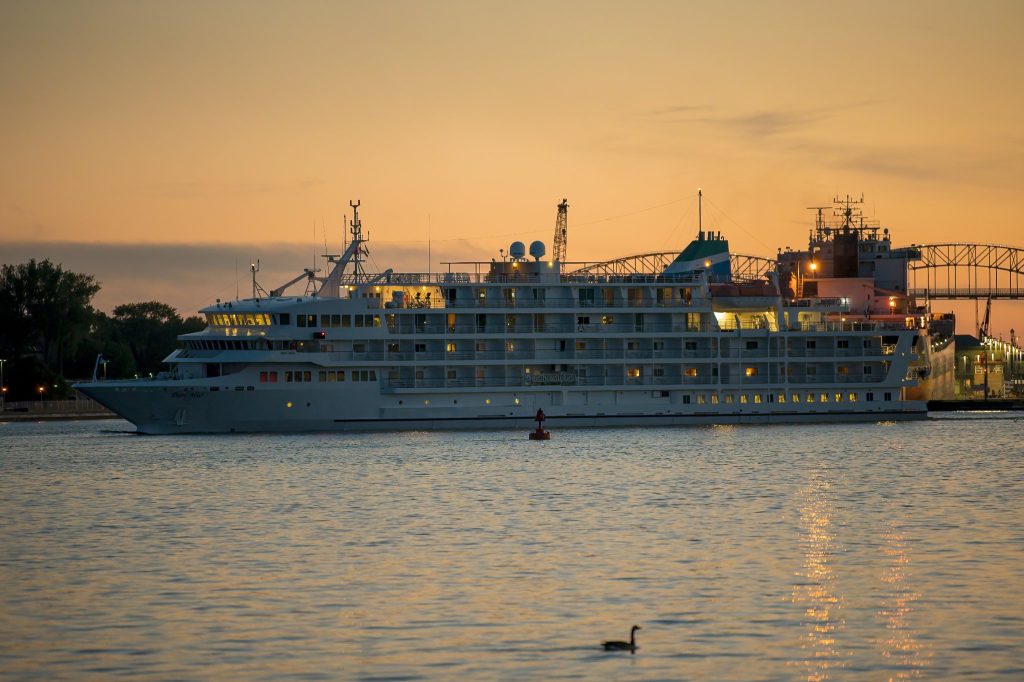 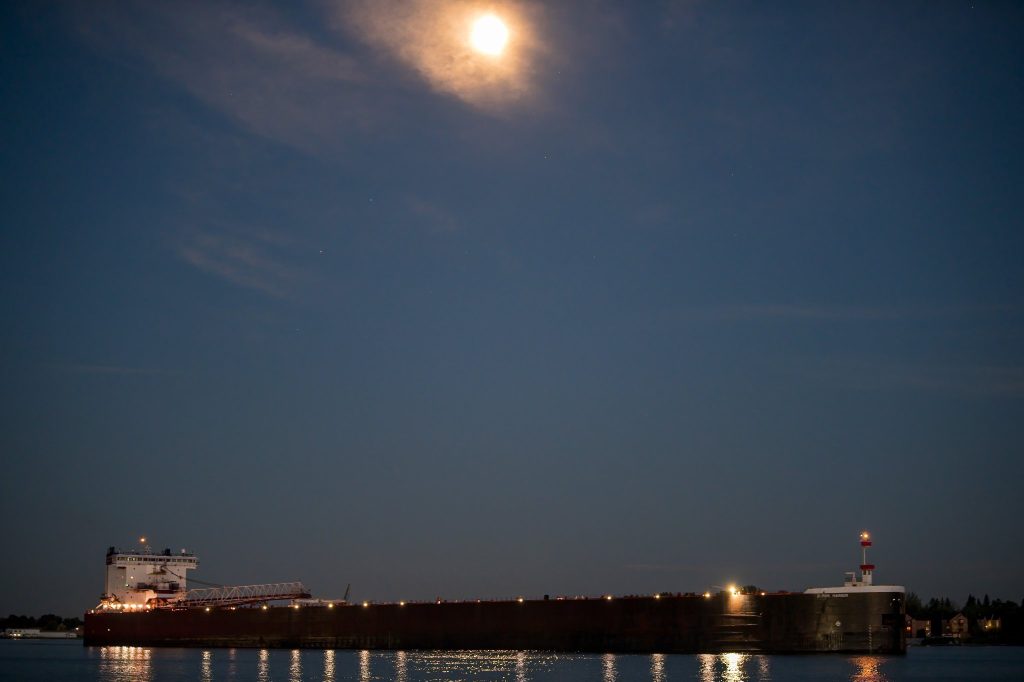 A glowing moon shines over the Burns Harbor as she sails upbound at the Soo. Jamie Piccolo, June 12 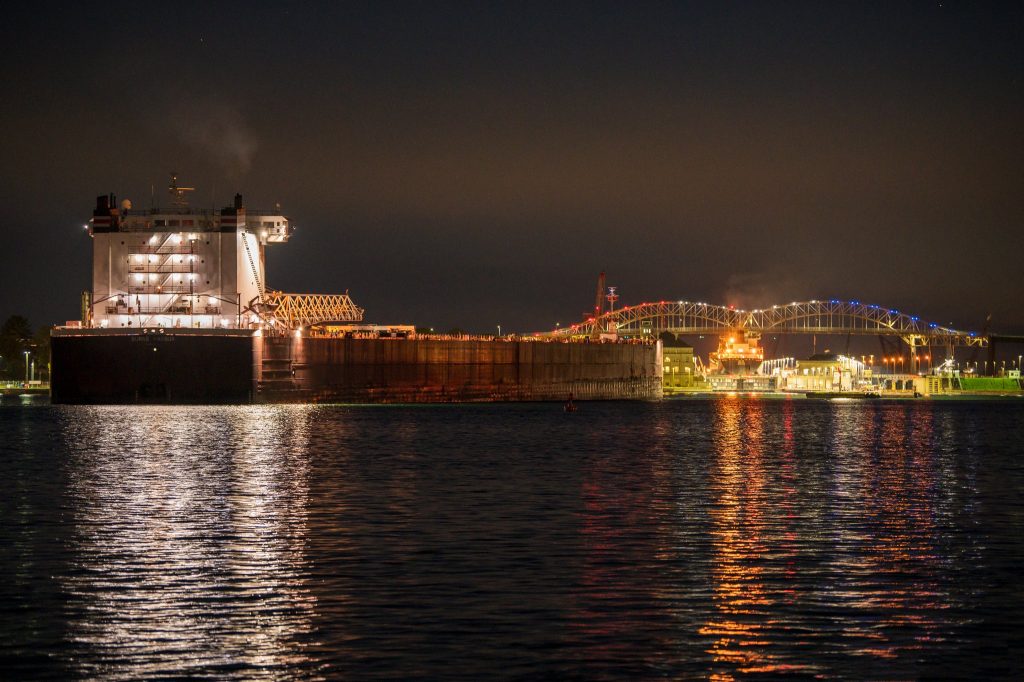 1,000-foot Burns Harbor waits her turn for the Poe Lock while headed on a rare trip to Silver Bay. Jamie Piccolo, June 12 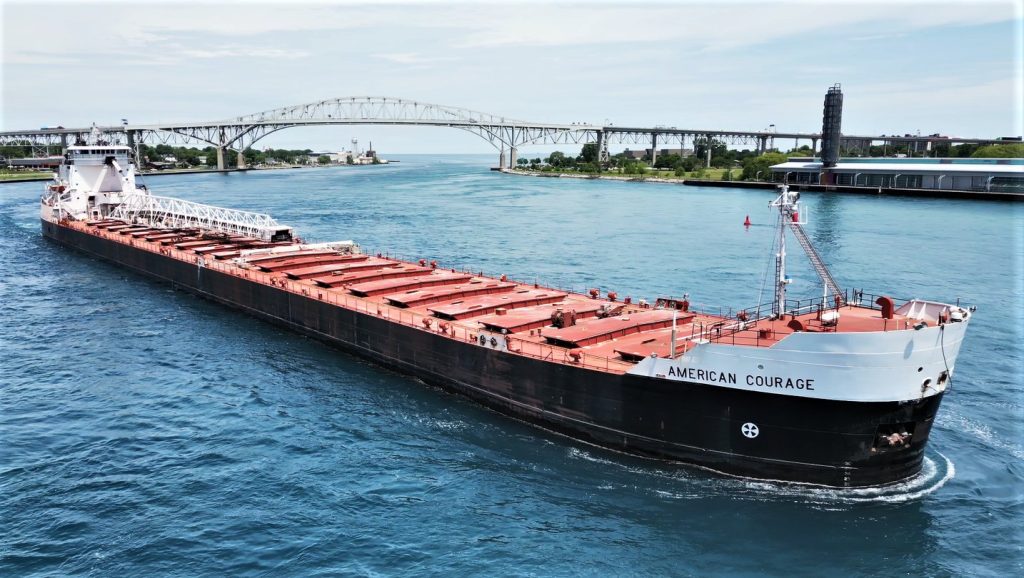 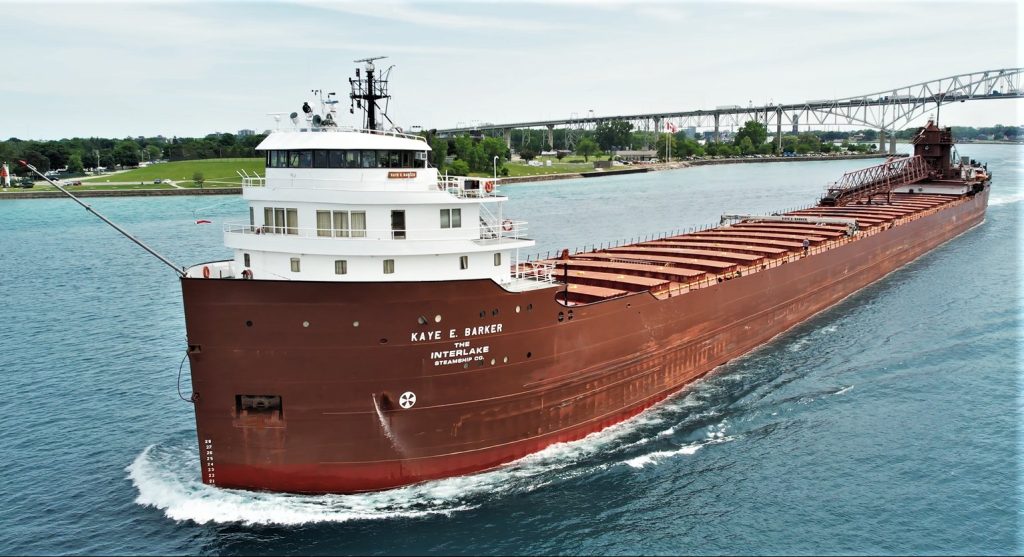 WWII veteran Lee A. Tregurtha proudly sails down the Detroit River in her 80th year of operation. Andrew Dean, June 13 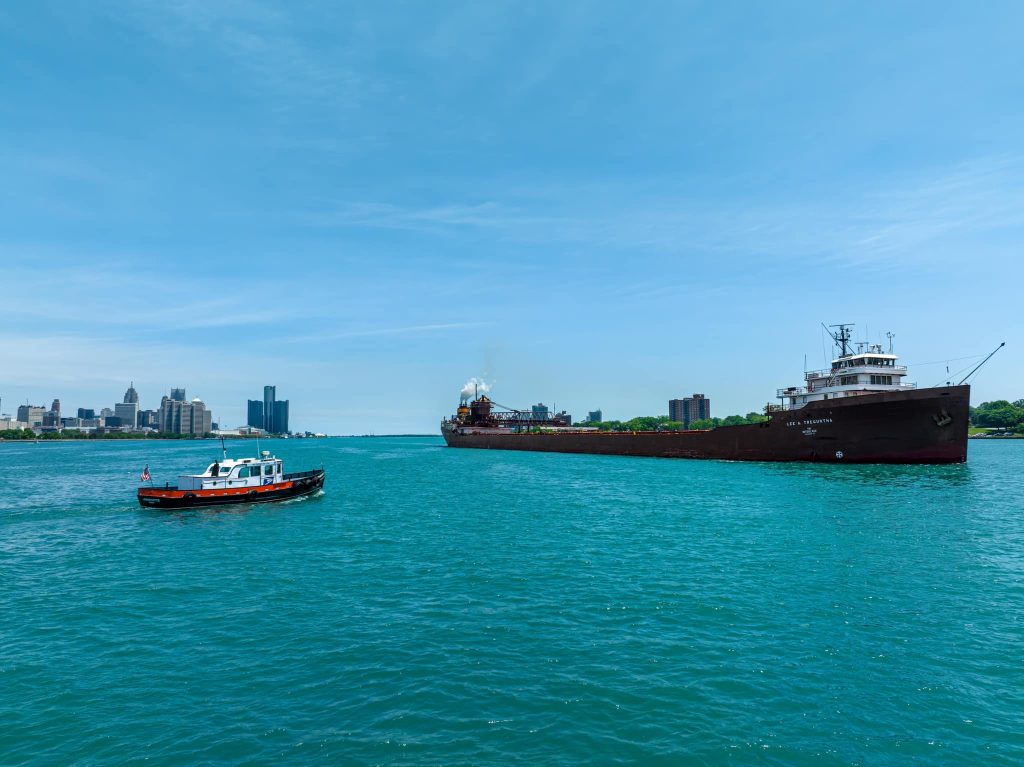 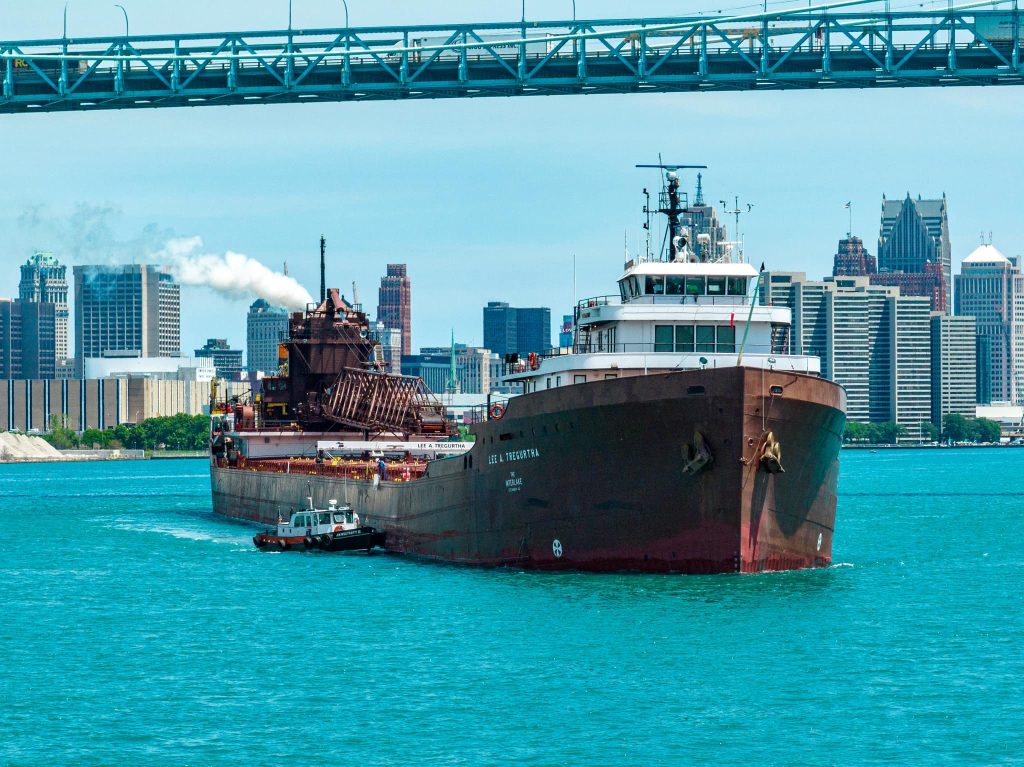 Lee A. Tregurtha receives her first mail via pail of the season from the J.W. Westcott II. Andrew Dean, June 13 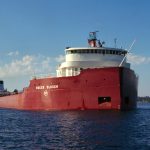 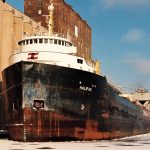