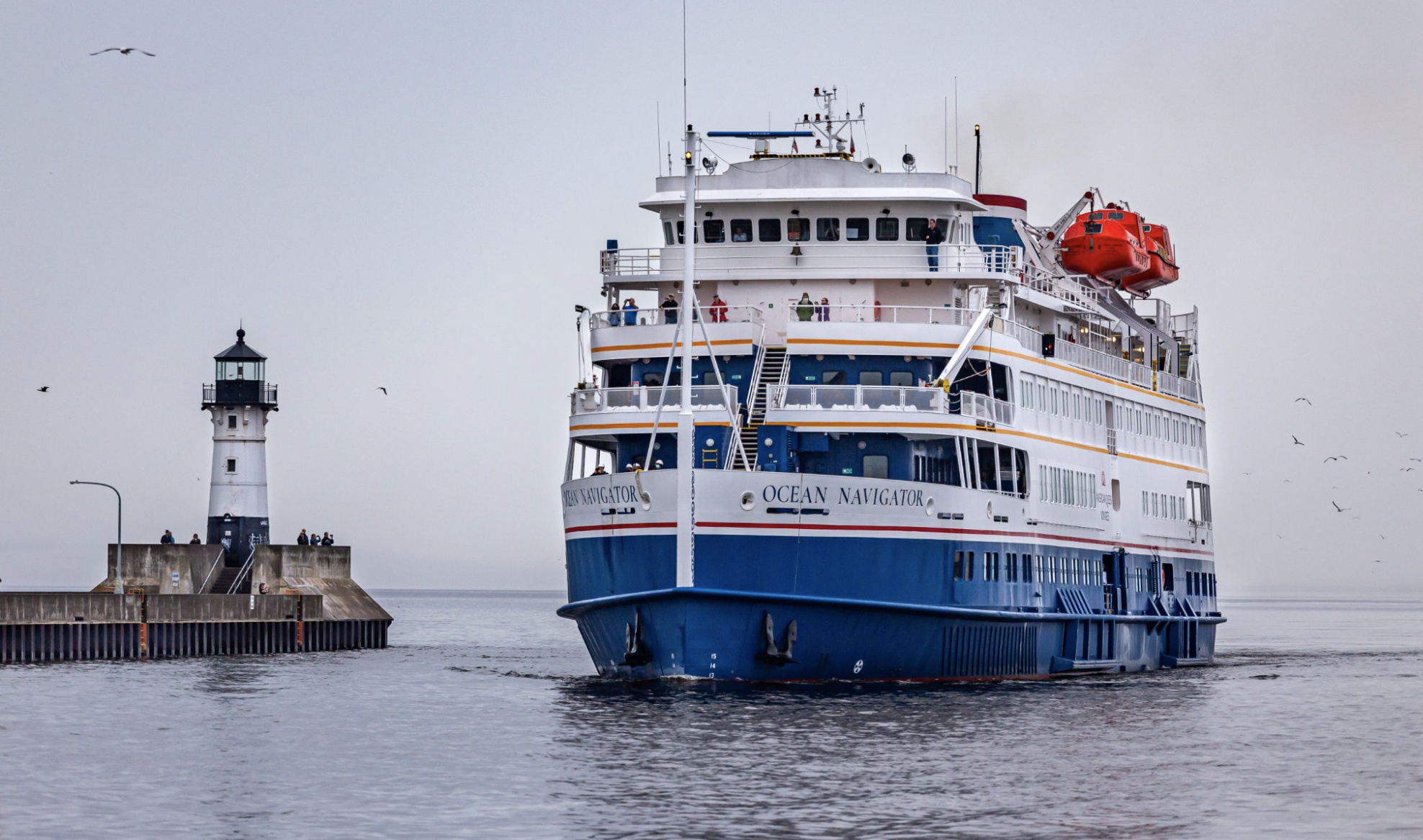 GREEN BAY, WI – After years in the making, it’s a sight that may be coming to Northeast Wisconsin for the very first time.

The cruise ship called the Ocean Navigator was recently spotted in ports around the Great Lakes, and anticipation is growing at the Port Green Bay for a scheduled arrival on Thursday.

“It’s really exciting. We’ve been working on this for six-plus years. Between COVID and sales of the cruise ships, and things like that. So, it’s really nice that it’s finally here,” said Sue Broberg, C & M Presents Owner. Broberg books tour groups for a living, and says bringing cruise ships to Green Bay is a good fit.

“We’re on the water. We’re on the big Fox River, out into the bay of Green Bay, and out into Lake Michigan. So, it’s about time that they stopped bypassing us and stop to see what we have to offer here in Green Bay,” she said.

The nearly 290-foot Ocean Navigator is on its way. It has been making stops at various ports of call, like Michigan’s Marquette, and Houghton too. Broberg says the ship offers first-class accommodations, and when the 108 passengers dock in downtown Green Bay, they will visit local sights including the Neville Public Museum, and of course, Lambeau Field.

“There’s a buzz about cruise ships, and I think it’s something unique that is happening in the Green Bay community,” said Cameron Teske, Discover Green Bay vice president of visitor experiences.

Teske says there is demand for Great Lakes cruises, and says his group will track the tourism numbers. “We always look back at an event like this, and measure where did they go? Who spent what? And where were they all coming from? So we do it when we have actual data not all these projections,” he said.

The Ocean Navigator is expected to arrive before 7 a.m. Thursday. Teske says he will be here to greet the ship. “When the community’s excited, the passengers, the visitors, they feel that excitement, and they feel that welcoming, and that’s when everyone has an even better time,” he said.

In addition to Thursday’s stop, the ship is scheduled to make another overnight visit to the Port of Green Bay, on June 30.

“When there’s a chemical released into the water that may have health effects it’s a lot more difficult to control because you can’t do some of the usual measures that we would do, such as a boil water advisory,” said acting medical officer of health Dr. John Tuinema. “If you were to boil the water when there’s a chemical in there, it doesn’t get rid of the chemical.”

Tuinema said the municipality of Echo Bay has been most affected by the oil spill.

Public health has advised residents not to drink the local well water. They’ve also been advised not to swim in the river or consume any local fish. But Tuinema added most people who live near the river get their drinking water from sources not affected by the spill.

The U.S. Coast Guard also sent vessels in the area and used drones to assess the extent of the spill downstream.

Iron Ore trade down 20.4 percent in May

CLEVELAND, OH – Shipments of iron ore from U.S. Great Lakes ports totaled 4.4 million tons in May, a decrease of 20.4 percent compared to a year ago and 21.9 percent below the month’s 5-year average.

Year-to-date the iron ore trade stands at 9.9 million tons, a decrease of 33.9 percent compared to the same point in 2021. Iron ore shipments were also 31.4 percent below their 5-year average for five months of the year. 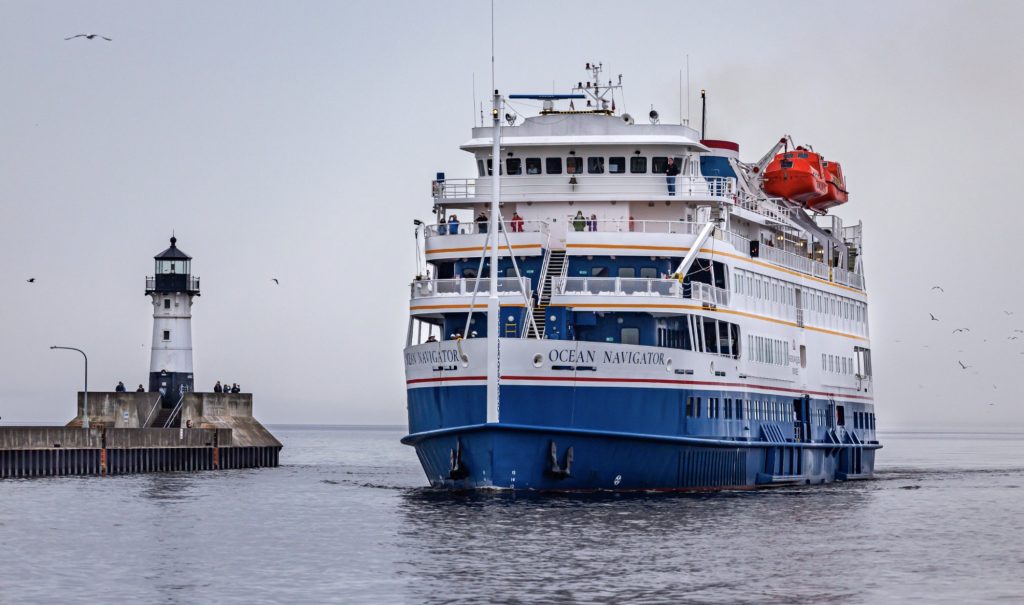 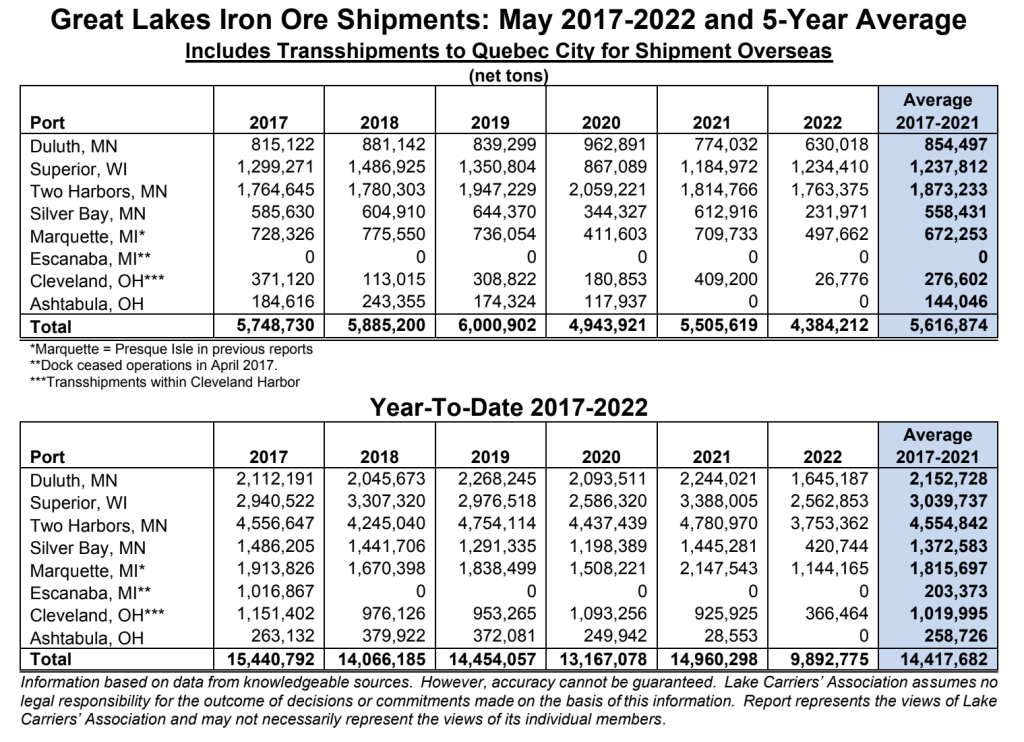 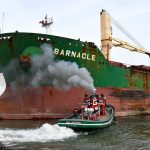