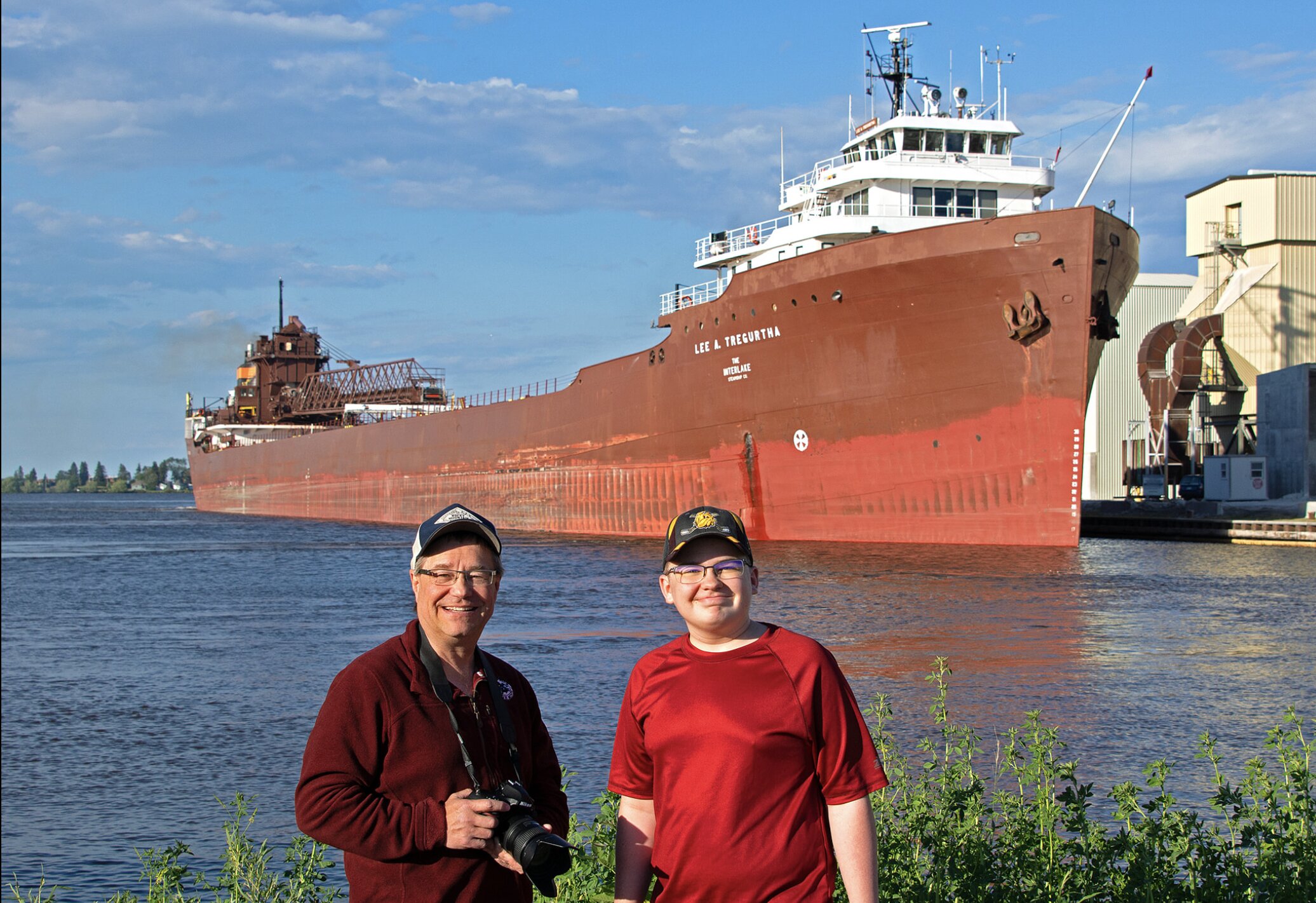 Born and raised in Duluth, photographer David Schauer recalls, “My childhood home was in the upper Endion neighborhood where I could see Lake Superior and watch boats coming and going from Duluth and Superior. That, plus hearing train horns at night, influenced my desire to photograph shipping and railroads.”

Through the family’s picture window, he would watch the ships on the Lake and started to be able to recognize them and to remember their names.  His first photograph of a boat was made in April 1978, as the tug Edna G docked in Two Harbors with the Arthur M. Anderson behind it.

Schauer and his family now live in the Smithville neighborhood in western Duluth. He and his wife Laura and have three teenage children; twin daughters Tessa and Greta and son Gus. Their daughters are graduating from Denfeld High School this year and Gus is a sophomore. Schauer’s son Gus is starting to follow his father’s passion for photography. “One of my great joys of photography is having my son Gus join me in capturing images and teaching him what I have learned over the years. I’m very proud of his work and his ability to understand the art of photography.“

He explained, “I first began photography in the late 1970s after being encouraged by my parents and friends. I became more interested after taking photography classes in high school and at UMD. I have been a serious amateur photographer since the early 1980s.”

Schauer said, “I first began shooting with my mother’s Kodak 110 instamatic and quickly graduated to borrowing my dad’s Nikkormat (Nikon) 35mm camera. I have stuck with Nikon since those early days and now employ a D850 digital model. As for a favorite lens, it has to be my 28-300mm zoom. I find the versatility of that lens is hard to beat. I’m also an FAA certified drone pilot and use a DJI Mavic 3 for aerial images. Along with his camera equipment, he totes along a tripod and flash unit for low light situations and extra charged batteries on his photo “safaris.” He also uses a radio to monitor marine, railroad and aviation frequencies.

He has had numerous images printed in magazines and books. He has also authored seven books on railroads. Some of his work was featured in a gallery exhibit at the Lake Superior Railroad Museum last year. Schauer enjoys photographing ships and trains in the same frame when possible. He has found several sites where railroads are in close proximity to docking facilities.

“For both ships and railroads I find photographing around the Twin Ports offers a wealth of vistas and activity,” Schauer said. “It is a great place if you like the combination of rail and sail. I greatly enjoy photography during what is called ‘blue hour’ before sunrise and after sunset. The color change in the sky can be dramatic during that time.”

He added, “I try to capture images that are creative or different versus standard angles. The drone has helped quite a bit in that regard. Photographing during blue hour and in changing weather conditions can produce distinctive images.” While his primary focus is on railroad and marine photography as his photo watermark suggests, he also enjoys general landscape/cityscape images and industrial subjects.

“Being a native of Duluth I love to showcase the beauty of the area, and Destination Duluth is a premier social media venue to help accomplish that. I’m honored when one of my images is selected for viewing and it is rewarding reading all of the positive comments, Schauer noted.  Since becoming a Destination Duluth contributing photographer in January of 2017, David has become one of the top three photographers, with a mind-boggling 6.5 million views of his photos on Destination Duluth.

“There are a number of current photographers in the area that produce stunning work that I follow, many of them contributing to Destination Duluth,” he said. “When I was young and just starting, photographers such as David Plowden, Richard Steinheimer and Philip Hastings were among many that inspired me to look beyond the common ‘point and shoot’ mentality of photography.”

It took a few days, but the first new boat in several years for the Lake Pilots Association is in the water.

The Huron Pride made its way from Somerset, Massachusetts, arriving in Port Huron on Tuesday by flatbed truck. “We’ve got two of them in the water right now — the Huron Spirit, and the newer one, the Huron Belle. This one’s replacing the Huron Maid, which it’s in our Detroit operations,” said Capt. Dan Gallagher, the association’s president.

“This is faster,” he said. “It’s a little bit smaller than the other ones. But … it’s more fuel-efficient. It won’t take the rough, rough weather like the other ones. It’ll make the transits a little faster. It’ll save wear and tear on our bigger boat. The bigger ones are quite expensive.”

The boat goes 37 knots, Gallagher said, which is about 42 miles an hour. The Lake Pilots Association was established in 1960 following the opening of the Saint Lawrence Seaway and provides pilotage services for ships in regional water systems, including the St. Clair River.

The latest boat — an all-aluminum, roughly 40-foot deep-V with a foam collar, according to its general design — is also just the latest brought in for the organization from Gladding-Hearn Shipbuilding. Gallagher said, “This the third boat they’ve built for us since ’77.” Peter Duclos, president of the shipbuilder, recalled taking on the family business arriving in Port Huron on Thursday. “This is like the fourth of this class. We’ve been building this particular class since the mid-2000s. It was really designed and conceived exactly as they’re using it — as a complement to the bigger 50-footers,” Duclos said. “It’s faster, burns half the fuel, but it is not a super rough-weather boat. It’s very capable for what it is. … But all those other times, 50, 60, 70% of the time, you burn in half the fuel, you get there faster, so that’s really the intent of this design.”

With arrival of the crew from Gladding-Hearn, they kept busy getting equipment in place before the boat was lowered into the Black River. “Height is an issue. Thirteen feet, six (inches) is the maximum road height,” Duclos said. “Radar, all the antennas (were) laid out. It’s basically a big job of putting the mast on.”

The group said the new boat came at a cost of over $1 million. “They’re not cheap,” Gallagher said. But they said it will last the association 40 years. “You’ve got to maintain it. There’s going to be things that are going to wear out, but the basic boat is still going to be there — no-frills,” Duclos said.

Gallagher said the last boat that arrived new came at the end of 2016. They said it was a summertime boat, citing the rougher water off-season. As of Thursday, Gallagher said they’re typically busy with six trips out a day, though it could depend on traffic on the water. “This is our transportation to and from the ships. It’s like everybody else, they commute by cars,” he said. “This is our ride to the ship to go to work every day.”

THOROLD, ON – Bioveld Canada and HOPA Ports have signed an industrial switch agreement with Canadian rail services provider, GIO Railways Corporation, to enable the use of existing CN Rail infrastructure at the Thorold Multimodal Hub to transload cargo. A switching agreement allows a short line operator (GIO Rail) to use the track owned by CN to provide first- and last-mile delivery and transload services.

New rail capabilities will help attract a range of industrial users who are looking to move goods through Southern Ontario, or into the Northeastern United States.

“Integrating and expanding the rail service offering to our tenants and customers has always been part of HOPA’s vision for the Thorold Multimodal Hub,” said Jeremy Dunn. “The fact that we have rail connecting indoor and outdoor transloading space and rail car storage right beside the Welland Canal are all part of what makes the Hub so unique.” This agreement will improve connections and modal choice for customers, and expand trade flows through the Thorold Hub.

The Thorold Multimodal Hub is a 200+ acre multimodal industrial complex in Niagara, adjacent to the Welland Canal. Unique to Niagara, it features marine, rail and highway access, as well as over 500,000 square feet of indoor warehouse and outdoor storage space, which can be configured to a wide variety of industrial, cargo handling and ancillary operations.

“With GIO Rail on board, we can operationalize rail lines that have not been used in more than two decades,” said Justus Veldman, Managing Partner of Bioveld Canada, a BMI company that owns the site and brings expertise in the productive repurposing of industrial brownfields.

In the near term, rail users will have access to the site’s transload, integrated warehousing, and railcar storage capacity. Looking ahead, the site will include marine-rail connections, a reactivated gantry crane and rail scale as part of a tailored supply chain solution. “Our approach is to work with users to reactivate these assets in a customized way that meets the needs of contemporary users,” said Veldman. The partners see potential value for users in sectors such as forest products, liquid bulk, plastics and metals, critical raw materials for the manufacturing and construction Industry.

Based in Welland, ON, GIO Rail has extensive experience operating industrial switching operations and short line railways throughout Ontario. In partnership with CN Rail, GIO has been a rail operator and service provider in the Niagara Region since 1997. “We are thrilled to expand our footprint into Thorold in partnership with CN Rail, and to see these lines revived,” said Neil Johnson, Vice President, GIO Railways Corporation.

“Room to grow and complete multimodal connections are value we are providing to users of the Thorold Multimodal Hub,” said HOPA’s Jeremy Dunn, while the addition of new supply chain options will provide modal choice and helping to alleviate pressure on regional highways.

The development is welcomed by Thorold’s civic and business leaders. “Yet again the Thorold Multimodal Hub is showcasing how partnerships and collaboration are yielding results,” said Thorold Mayor, Terry Ugulini. “It is through transload operational capacity, integrated warehousing and railcar storage capabilities that sustainable supply chain can be achieved.  This rail infrastructure will support the new creative industrial industries that call the Thorold Multimodal Hub home and will assist in the attraction of new investment.  On behalf of Thorold City Council and our Economic Development team we welcome this announcement and look forward to the prosperity it will bring to the Niagara Region.”

Please take a moment to complete our survey. It takes less than five minutes and will help us determine the future of Boatnerd. Thank you. 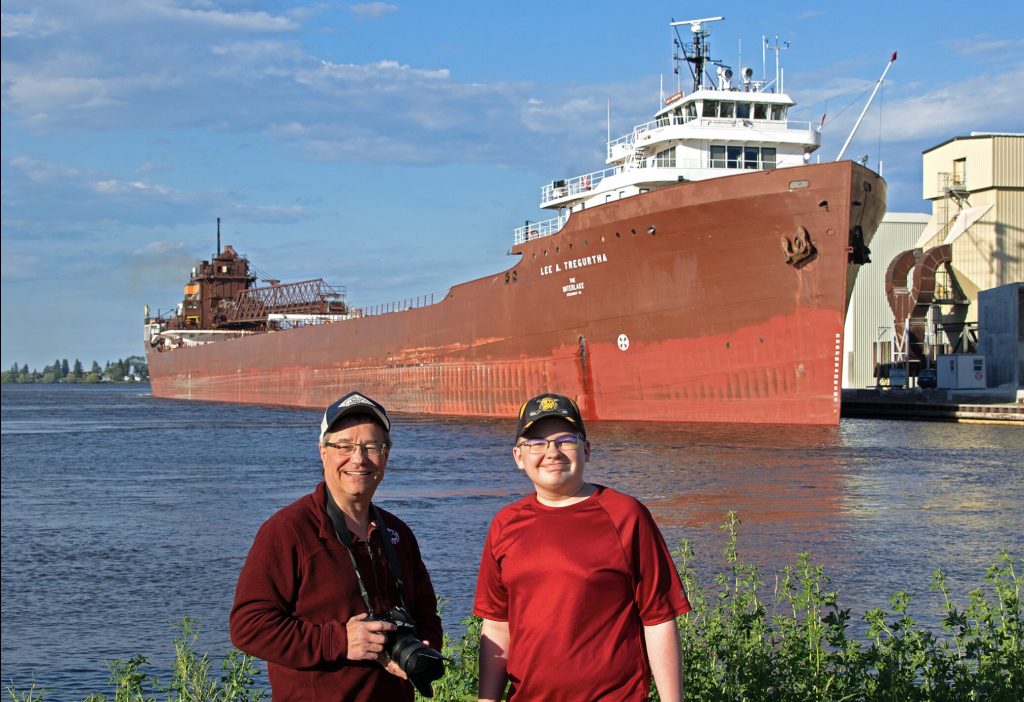 David and Gus Schauer posing with the Lee A. Tregurtha in 2021. Kent Rengo photo 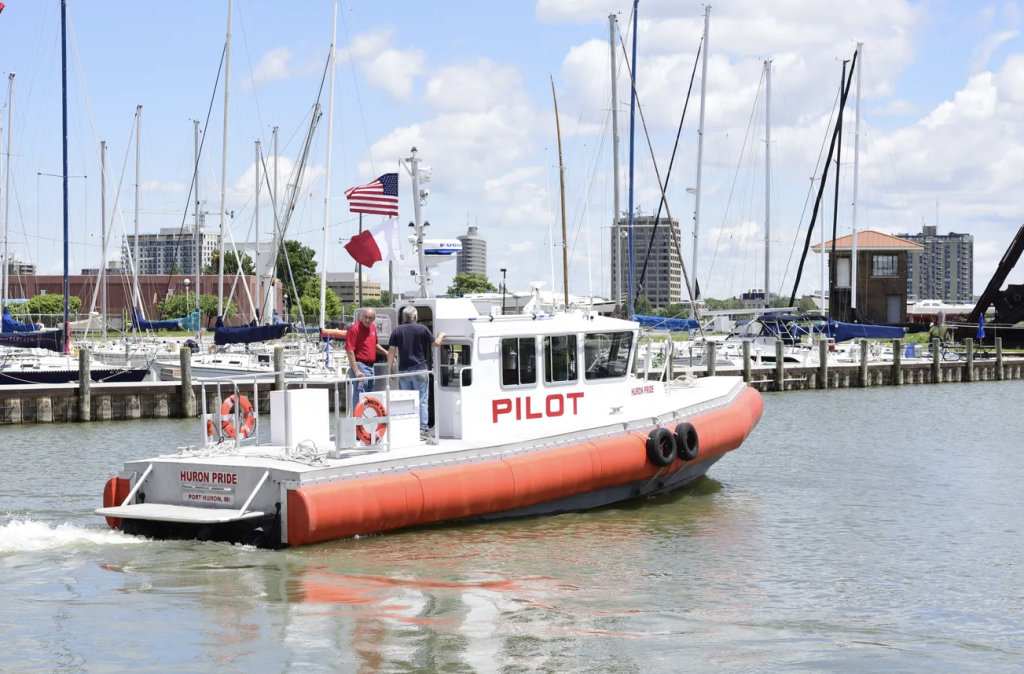 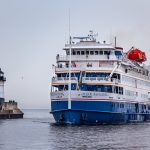