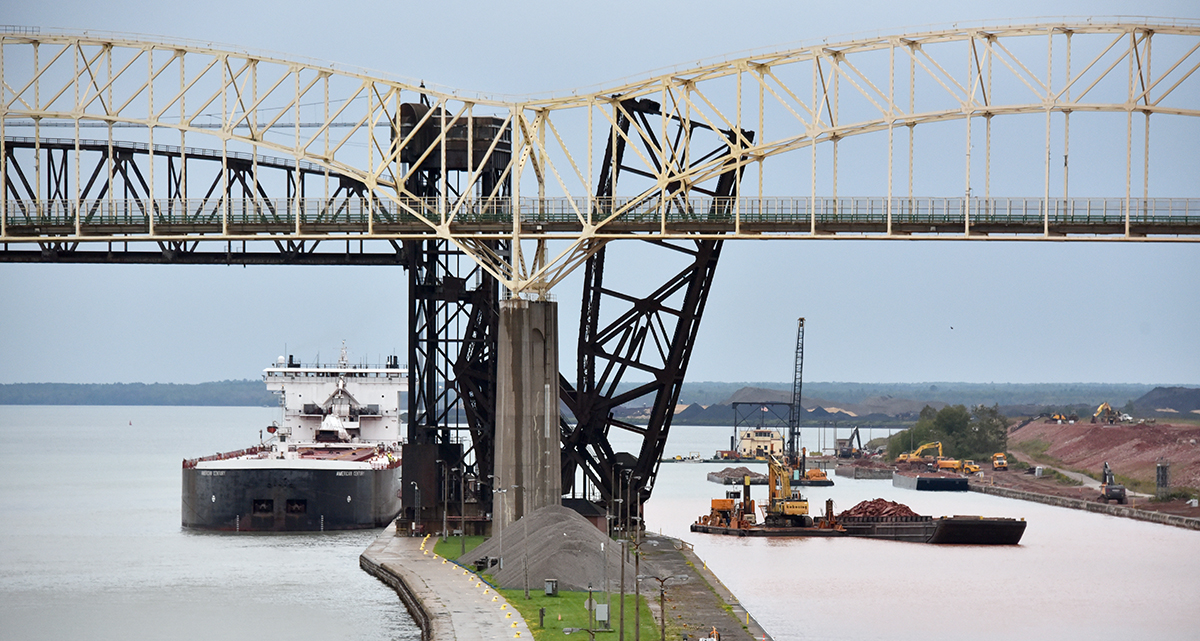 Richard Gray, second mate on the American Steamship Co. 1,000-footer Walter J. McCarthy Jr., died Monday night in a shipboard accident. The vessel was anchored offshore at Gary, IN, at the time and getting ready to come in and unload. His wife Danielle and three children survive. He was a graduate of the Great Lakes Maritime Academy. Richard lived in Traverse City, MI., and was active the International Shipmasters’ Association lodge there.

A GoFundMe campaign to help lend some support to his wife and children can be found here:  https://www.gofundme.com/f/supporting-the-family-of-richard-gray?utm_source=customer&utm_medium=copy_link_all&utm_campaign=m_pd+share-sheet

Detroit, MI – The most uncertain aspect of any federal project is the availability of funding to get it finished, but it appears the construction of a long-awaited new navigation lock at Sault Ste. Marie has, for now, crossed this final hurdle.

U.S. Sen. Debbie Stabenow’s office told the Free Press on Wednesday that the Army Corps of Engineers is committing $479 million from the $1.2-trillion infrastructure bill President Joe Biden won through negotiations last year with Congress to the project.

According to the Corps’ breakdown of costs for building the approximately $1.5-billion super-size lock on the Upper Peninsula, that should be about enough to finish the project by the end of the decade, barring cost-overruns.

The funding, Stabenow’s office said, is on top of about $480 million that was requested by the Biden administration for the project in this year’s budget and was included in the funding agreement the federal government is currently operating under.

The White House in a news release Wednesday morning said the investment in the Soo Locks as well as others across the country were intended to help ensure goods and materials get to markets and manufacturers, especially at a time when the COVID-19 pandemic has made it harder to make and transport items on time. “Decades of neglect and underinvestment have strained… capacity and jeopardized supply chains,” the White House said.

At the height of construction, the new Soo Lock — which will help move the largest vessels between Lake Superior and the St Marys River leading to Lake Michigan and Lake Huron and the lower Great Lakes — is expected to employ about 1,200 people.

In addition to the employment numbers, however, is the importance of the Soo Locks to the nation’s economy. Currently, only one of the locks, the 53-year-old Poe Lock, is large enough to accommodate the 1,000-foot vessels that move the bulk of cargo, including iron ore pellets needed for manufacturing, across the Great Lakes.

For decades, members of Michigan’s congressional delegation, including Stabenow, have been fighting for construction of a second super-sized lock, with government reports indicating an extended breakdown at the Poe Lock could cause a huge shockwave through the U.S. economy.

In 2018, after urging by then-President Donald Trump, the project finally began to move forward, with funding being authorized for the early stages of construction. In November of last year, the head of the Army Corps of Engineers’ Detroit District, Lt. Col. Scott Katalenich, said the project was on schedule with work around the lock and its design underway. A contract to build the new lock, he said, could be awarded by February.

But funding, especially for projects that can take more than a decade to complete, is often a question mark since Congress is usually called on to make multiple appropriations through the years and the Army Corps doles that out across many projects underway nationally.

Passage of the infrastructure bill — which should be worth upwards of $10 billion to Michigan in road and bridge funding, mass transit investments, broadband Internet and more — guaranteed some $12 billion in funding to the Army Corps nationwide

December was warmer than normal across the Great Lakes. In fact, at most Lower Michigan cities, December only had three days with below-average temperatures. Going into January, there was only about 2% of the Great Lakes covered with ice.

Read more and view graphs at this link: https://www.mlive.com/weather/2022/01/ice-on-great-lakes-starting-to-expand-with-recent-arctic-blasts.html?fbclid=IwAR1B7YYZ8GO84oXpc-rU-xTV7GRuHzlbgD_XoMYNRsJMnlzWsJhsrwzsTg8

Cornwall, ON – The St. Lawrence Seaway Management Corporation (SLSMC) announced today that more than 38 million tonnes of cargo transited the system during the 2021 navigation season which, despite another challenging year, is above last year’s results.

Iron ore, steel slabs and other steel products posted strong performances, contributing to over 10.5 million tonnes of the total.  This was driven by demand from both the automotive and construction industries. These results, and the fact that we traded cargo with over 50 countries, confirm the Seaway’s role as an important transportation corridor connecting North America’s largest industrial hubs to markets around the world, as well as in identifying export opportunities and contributing to the economic recovery. Petroleum products and other essential chemical products were up some 5%, and are starting to return to more normal levels.  Such varied cargoes as stone, cement, potash and aluminium were also up. Grain, at 10.6 million tonnes, is below last year’s exceptional results due to a smaller crop and drought conditions in both western Canada and the U.S. mid-west.  Canadian grain, however, was still tracking at a 5-year average.

“At the Seaway, we continue to demonstrate our resiliency and operational sustainability”, said Terence Bowles, President and CEO of the SLSMC. ”In spite of the  many challenges experienced by the transportation industry this past year, the Seaway was able to maintain its operations and its position as a reliable commercial transportation corridor, ensuring consistent and predictable service for its customers and supporting the Canadian and U.S. economies during this difficult period.”

Reliability of the system is attributable in part to a robust maintenance program.  Over the past navigation season and through the upcoming winter months, close to $70 million is being invested in SLSMC maintenance and repair work. Over the past decade, the SLSMC and GLS have invested CAN$925 million in modernizing the binational Seaway infrastructure assets. This economic activity supports many local jobs and enterprises in the communities adjacent to the Seaway.

Craig H. Middlebrook, Deputy Administrator of the U.S. Great Lakes St. Lawrence Seaway Development Corporation (GLS) said, “Throughout another year of challenges to the transportation industry, the Seaway’s performance highlighted its continued resiliency as a maritime supply chain. The Seaway handled an increase in cargo tonnage over the navigation season, and did so safely, reliably, sustainably, and in an environmentally sensitive manner. Seaway users know they can rely on the waterway to meet their domestic and international cargo needs.”

For over 60 years, the Canadian and U.S. Seaway Corporations have worked closely with stakeholders to strengthen partnerships, enhance efficiencies and drive sustainable growth. Today, the Seaway is a world-class energy-efficient waterway, an essential transportation corridor for North American goods and services, as well as a strong environmental alternative to other modes of transportation.

The last commercial transit of the 2021 navigation season through the Montreal-Lake Ontario section occurred on December 31st.  The Welland Canal had a later closing date, with the final vessel transiting on January 7th.  The Seaway canals and locks traditionally re-open for shipping in mid-March, with major maintenance programs occurring during the non-navigation season.

Now that the end of the shipping season has arrived, please send reports of vessel lay-ups to [email protected] This will help us compile our annual lay-up list. Include vessel name, date, port and name of lay-up dock. Click here to view the Lay-Up List: https://boatnerd.com/winter-layup-2021-2022/ 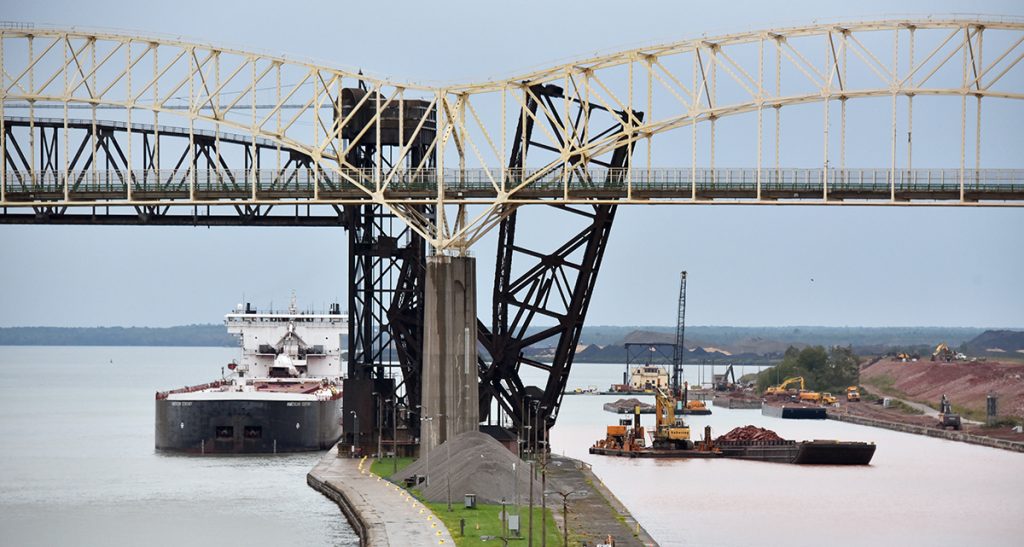 Vessels pass to the south, while work on the New Soo Lock progresses to the north. The red rock at far right is sandstone removed from the lock approach. Roger LeLievre 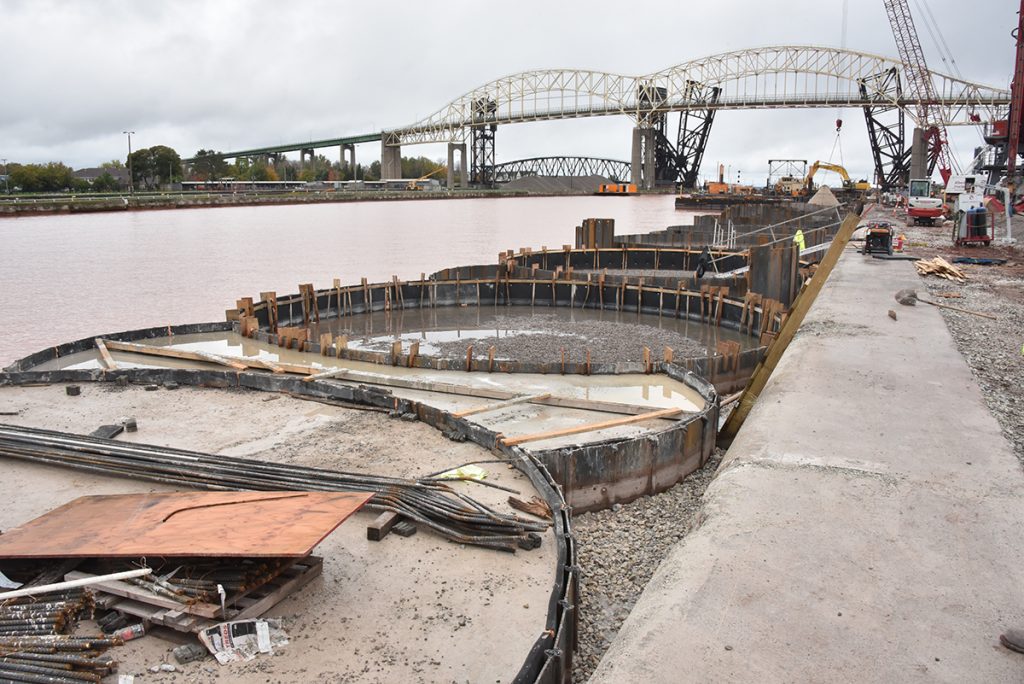 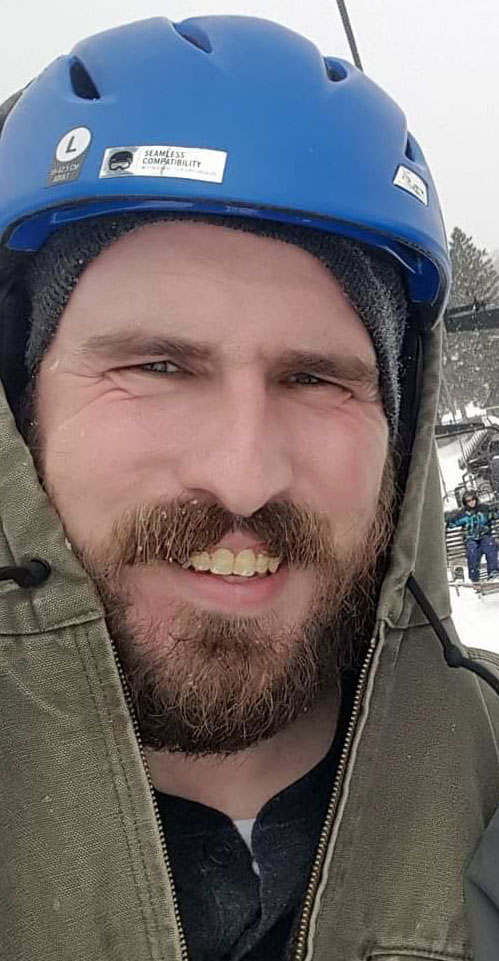 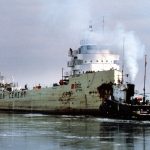 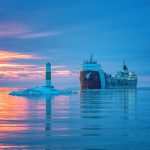