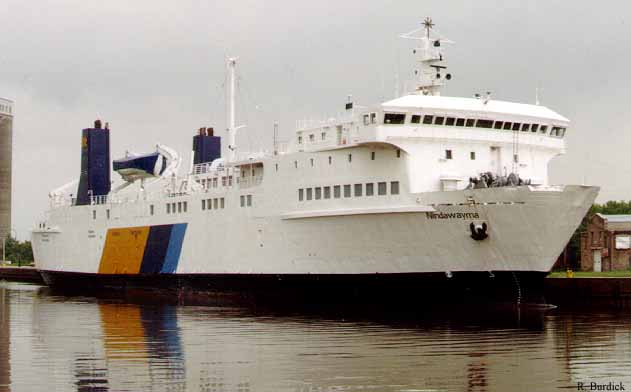 Launched in 1976 as the Monte Cruceta, this roll-on/roll-off cargo ferry was built by S.A. Juliano Construction Gijonesa, Gijon, Spain. She is powered by 2 Pielstick V-12 cylinder 4,200 horsepower diesel engines driving 2 controllable pitch propellers giving her a rated service speed of 17 knots. She is equipped with both bow and stern door ramps. The vessel was modified in 1978 to carry 400 deck passengers with 12 berths and 130 automobiles at a maximum draft of 15 feet 11 1/2 inches.

This vessel went through a series of name changes before coming to Canada. Later in 1976, the Monte Cruceta's name changed to Monte Castillo. She was renamed Manx Viking in 1987 after sailing for the Manx Line Ltd. under British registry since 1978. The Manx Viking name lasted for 2 weeks while she was transported from England to Norway when she was sold Norwegian and renamed Skudenes. January 30, 1989 saw the vessel sold to the Ontario Northland Marine Services when she was renamed Ontario No.1 for the Atlantic crossing. After a refit at Owen Sound, ON; a contest sponsored by the Ontario Government was held to name the vessel. The Ojibway Indian word Nindawayma (meaning "Little Sister") was chosen. She entered service opposite the Chi-Cheemaun providing ferry service from Tobermory, ON to South Baymouth, ON (on Manitoulin Island).

The Nindawayma sailed through the 1992 season after which she laid up at Owen Sound, ON. Her 5-year Coast Guard survey expired in 1996.

In late October, 2000 the Nindawayma was sold to the Verreault Marine and Navigation Services Company for a reported 1.5 Million (C)..  Verreault is a shipyard and had purchased the carferry for conversion to transport something other than cars. The 102 meter Spanish built Nindawayma departed Owen Sound on October 31 after an eight year lay-up. It was towed by the tug Point Carroll to Les Mechins, Quebec arriving on November 7.

The vessel was rumored to be set for conversion into a cable ship for a company based in England. For unknown reasons the planned conversion did not take place and the Nindawayma was towed back to Montreal to await her fate.  In early 2007, the ferry was acquired by Upper Lakes Group, Inc., Toronto, ON.   The ferry will be used by Upper Lakes as a source for spare parts after being towed to Port Weller Dry Docks at St. Catharines, ON, arriving there on April 26, 2007 under tow of tugs Radium Yellowknife and Commodore Straits.  Following the salvaging of usable parts and equipment, the retired ferry is expected to be cut down to a barge.